T3D puts a bet on Alzheibetes

An unusual update at last month’s AAIC meeting puts the focus on a phase 2 readout next year, but time might be running out.

With major doubts about the amyloid hypothesis of Alzheimer’s, the need for new approaches is clear. The private group T3D believes it has found one with its lead project, T3D-959, which it says addresses the “brain starvation” at the root of the disease.

T3D is not the only one testing the theory that glucose dysregulation is involved in Alzheimer's, with Novo Nordisk also evaluating its GLP-1 agonist semaglutide in phase 3. But T3D-959 is a PPAR agonist, a class with a much more chequered history. And the compound's main patents expire next year, providing another reason for caution.

T3D’s chief executive, John Didsbury, stresses the differences between T3D-959 and Avandia, a PPAR-gamma agonist that was approved for type 2 diabetes before being linked with heart problems. Avandia has also failed to show a benefit in Alzheimer’s.

“That was the worst possible molecule to test in Alzheimer's disease,” he tells Evaluate Vantage. “Hardly any gets into the brain. And PPAR-gamma as a target is only found in certain regions of the brain.”

T3D-959, meanwhile, targets PPAR-delta and, to a lesser extent, PPAR-gamma. “PPAR-delta is found everywhere [in the brain], particularly in areas of high energy metabolism.”

Still, delta-specific PPARs have had toxicity worries of their own.

Mr Didsbury reckons his confidence in T3D-959 is borne out by preliminary efficacy data from the phase 2 Pioneer trial, which were presented at the AAIC meeting in August. Unusually, the dataset comprised pooled results from the placebo cohort and three different T3D-959 dosing arms. Thus, the chief exec says, the results are still blinded ahead of full readout next spring.

Mr Didsbury points to the fact that, despite including placebo patients, the AAIC data showed an improvement on Adas-Cog that was not too far off that seen with the approved Alzheimer’s drug Aricept. 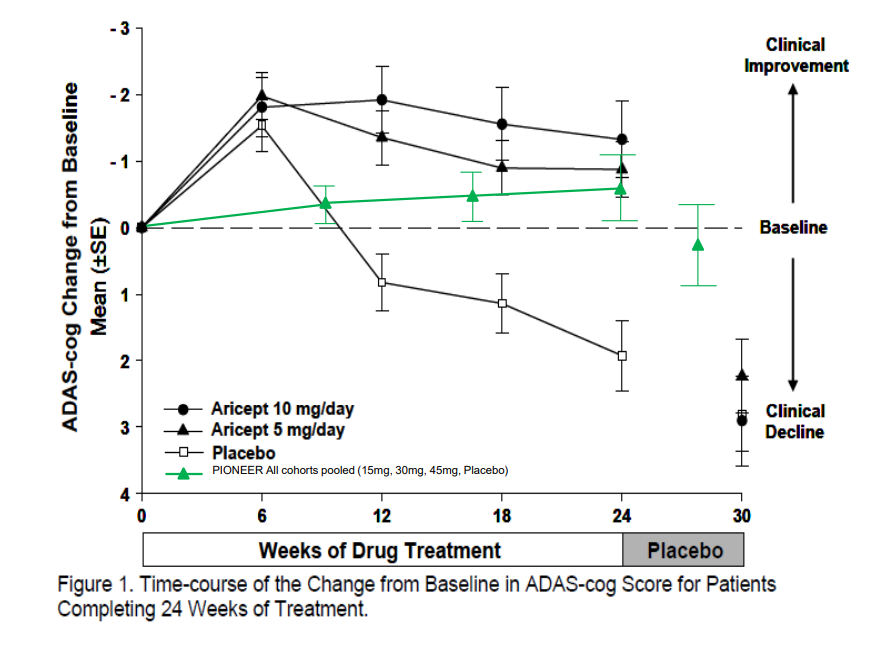 “When we unblind and subtract out [the placebo group], this improvement is likely to be much higher,” he concludes. However, this outcome should not be taken for granted.

Ultimately, the chief exec is hoping for an Adas-Cog benefit that is better than Aricept’s. Pioneer’s other co-primary efficacy endpoint is ADCS-CGIC, which measures function; Adas-Cog evaluates cognition.

Mr Didsbury believes that T3D-959 will be able to treat mild-to-moderate Alzheimer’s – one reason suggested for previous amyloid-targeting failures was that they had been given too late in the disease process to make a difference.

“[That] idea that was put forth by large pharma four or five years ago. To me, having worked in large pharma, that is a rationalisation for failure.”

So why would targeting glucose and lipids work better than hitting amyloid? “Decreased glucose metabolism is a cause, not a consequence, of neurodegeneration,” Mr Didsbury contends. Still, he adds that the metabolic changes seen in Alzheimer’s are closely intertwined with the structural changes such as plaques and tangles, with inflammation also in the mix. Will a combination approach ultimately be needed?

Perhaps, he says. “But you won't be able to do that until you have three marketed medications targeting each of those major events. That's so far into the future it’s mind-blowing.”

There is, of course, an approved anti-amyloid antibody, but Mr Didsbury is not keen on a combo with Biogen’s Aduhelm, saying: “I don't think Aduhelm on its own does anything. I’d first be looking at T3D-959 as a monotherapy, and seeing how it stands on its own.”

Even if T3D-959 does what many other Alzheimer's have not and show a clinical benefit, its composition of matter patent expires next year. Mr Didsbury says the group will rely on around seven years of market exclusivity.

The project has certainly had a long journey to become an Alzheimer’s contender. In 2013, T3D licensed it from Dara Biosciences, which had been developing it for type 2 diabetes and dyslipidaemia; previously it had been in Bayer’s hands.

Mr Didsbury is not fazed by this apparent lack of interest from other groups. “T3D-959 just needed to find the right home in terms of what disease it might work best in.”

Developers take another shot at an Alzheimer's vaccine

Interview – How AC Immune could finally (dis)prove the amyloid hypothesis