The mere possibility of Guardant horning in on colorectal cancer has spooked Exact’s investors.

Exact Sciences is one of the recent success stories of medtech. Its Cologuard colorectal cancer stool test reached the market in 2014 and has sold extraordinarily well. Exact’s market value has increased more than 600% in the past five years.

However, such is the buzz around liquid biopsies – intended to diagnose solid tumour cancers using a blood test – that Exact can be damaged by even the whisper of potential competition here. Guardant Health’s announcement that it plans to start a trial of its Lunar assay as a screen for colorectal cancer in 10,000 people was enough to prompt a 10% fall in Exact’s shares on Friday.

Initial research into using Lunar as a colorectal screen was presented at this year’s AACR meeting and showed the test to have respectable accuracy, roughly on a par with that of Cologuard (Guardant looks to its other liquid biopsy, April 1, 2019). But it should be remembered that the data from Cologuard’s various much larger clinical trials are more robust.

Friday’s drop in Exact’s share price seems surprisingly large considering the company's impressive record and the fact that Guardant’s new trial has not even started, still less reported data positive enough to threaten the incumbent. But Exact has been doing early research towards developing a liquid biopsy of its own, for colorectal and other cancers, and if Guardant ends up occupying this niche it could block a key franchise extension.

Cologuard Blood, as Exact’s research programme is called, is a collaboration with the Mayo Clinic. In February, Exact’s chairman and chief executive Kevin Conroy said the researchers were collecting samples for internal testing of different markers and technologies with the aim of ultimately bringing a blood-based colon cancer screening test to market.

Guardant plans to begin recruitment of 10,000 people at average risk of developing colorectal cancer into its Lunar trial in the second half of this year. It looks like Exact is trailing when it comes to blood tests.

Exact Sciences' past and forecast sales 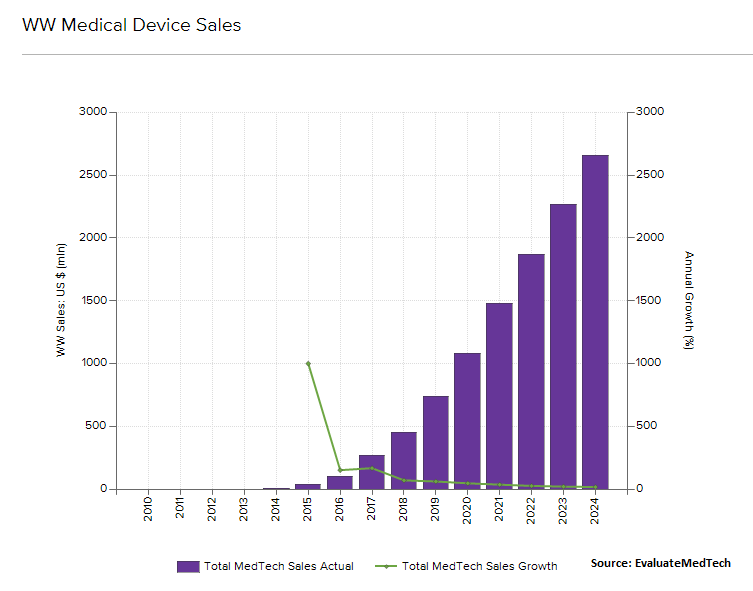 But the fact remains that Exact already has a highly successful colorectal cancer test – more than can be said for Guardant. Cologuard is approved, recommended in various guidelines and widely reimbursed. In 2018, it was used in 934,000 people, generating $454m in revenue for Exact. According to EvaluateMedtech’s consensus data, its sales are forecast to grow at an annual rate of 34% to 2024, at which point they will approach $2.7bn.

Perhaps Guardant can compete on price or turnaround time – Cologuard has a list price of $649 and takes two weeks to return results. But even if Lunar succeeds in its huge study it will still be years from market; the trial could take a year and a half to enrol, for a start. A 10% drop in Exact’s share price as a result of Guardant’s activity might one day be warranted – but surely not yet.

Freenome aims to take on the big beasts