As Glaxosmithkline manoeuvres to become a major player in cancer, it backs Icos among other novel mechanisms.

A day after shelling out $350m for a stake in Merck KGaA’s bi-functional fusion protein, Glaxosmithkline executives underscored the company’s desire to get big in oncology, pledging to push on with deal-making.

The UK pharma giant’s quarterly results also contained a couple of intriguing updates to its existing pipeline, most notably that the Icos agonist GSK3359609 was being pushed forward in various settings. This mechanism, which releases a brake on the immune system, has disappointed in the clinic by largely failing to add anything notable to PD-1 blockade. On an investor call today ’609 was mentioned several times, suggesting that this stood as one of the company’s biggest immuno-oncology hopes.

A major player here, Jounce Therapeutics, has been punished for having an investment case largely based on the Icos pathway; the company’s share price has plunged by 84% over the past 12 months after data failed to live up to the project's initial promise (Asco preview – No Icos bounce for Jounce, May 17, 2018). Thus it is somewhat surprising to find Glaxo pushing on so enthusiastically with Icos, though the pharma giant seems to be largely echoing Jounce’s attempts to look beyond PD-(L)1 combos here.

This involves testing GSK3359609 in combination with Astrazeneca's tremelimumab; the rationale here is that this mechanism works best in an Icos-high CD4+ T-cell population, something that CTLA-4 – but not PD-(L)1 – blockade promotes. A study in non-small cell lung cancer patients who have failed PD-1 inhibitors also recently started, while Glaxo said it would release “encouraging” data on ’609 in combination with Keytruda at conference in the second half of the year.

This will be of keen interest to those also still working on this space, which as well as Jounce includes Kymab, which recently put an asset into trials in combination with Roche’s Tecentriq.

Other notable highlights from Glaxo include the start of trial for a RIP-1 kinase inhibitor, GSK3145095; RIP1 kinases play a role in inflammatory pathways, but their activity is also thought to regulate apoptosis and the production of inflammatory cytokines. Glaxo looks to be alone here, in the clinic at least, though Sanofi and Denali have a candidate in trials in autoimmune diseases. 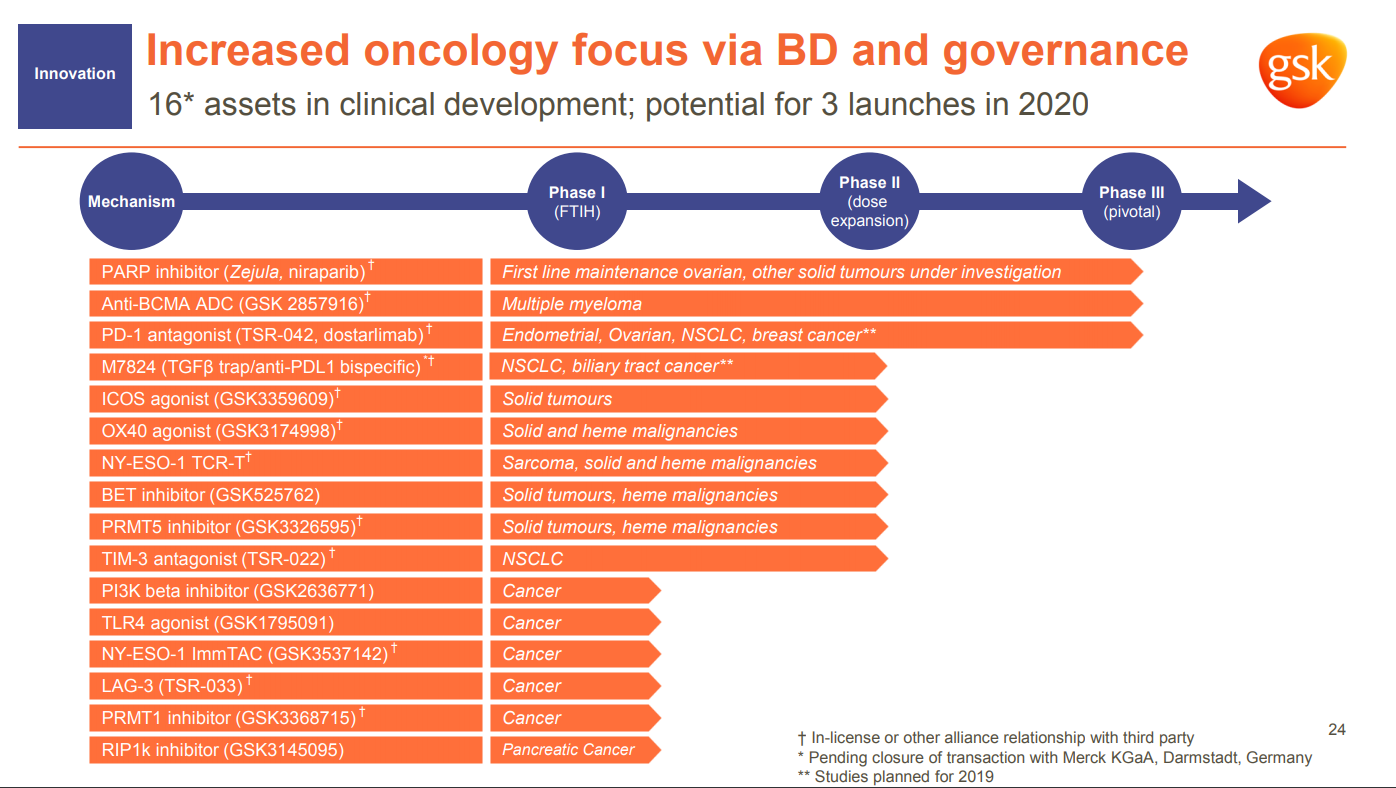 Meanwhile, a PRMT1 inhibitor has also recently advanced into an early trial; overexpression or deregulation of PRMTs (protein arginine methyltransferases) has been associated with various cancers. Again, Glaxo looks to be working alone here, at least for the time being.

These all remain very early-stage bets, however, and Glaxo’s attempts to build a presence in oncology will be driven by later-stage wins. Specifically, the company highlighted three pivotal trials to report this year, two of which it inherited from the recent Tesaro acquisition. The most important is the Prima study of Zejula in first-line ovarian cancer, while a phase III test of Tesaro’s anti-PD-1 candidate will also report this year.

Glaxo boasted today that its oncology pipeline had swelled from eight to 16 projects over the past few months, and made it clear that it would add more. This exercise will not come cheap and, as numerous setbacks in the immuno-oncology world have demonstrated, progress is far from guaranteed. Investors should brace themselves for a rocky ride.