Lundbeck leaps into the Tourette’s pipeline

By taking out Abide Therapeutics, Lundbeck has bought one of very few clinical-stage Tourette’s syndrome candidates.

Lundbeck has made no secret of its desire for acquisitions, and this week it delivered a takeout of Abide Therapeutics for an initial $250m. The California biotech has developed a specialism in serine hydrolase biology, and generated a lead project in Tourette’s syndrome, a neurological disorder that sits squarely in Lundbeck’s CNS-focused wheelhouse.

The asset is ABX-1431, and represents a new mechanism for Tourette’s, which manifests through involuntary sounds and movements called tics, and has proven tough to treat pharmacologically. This helps explain the relatively bare experimental pipeline, which was recently robbed of a big late-stage hope in Neurocrine’s Ingrezza.

The failure of Ingrezza's phase IIb trial last December erased $1.2bn from the US company’s market value, suggesting that any future success would be widely welcomed by the medical and financial communities (Neurocrine throws in the towel on Tourette’s, December 12, 2018).

Lundbeck has some way to go before it can prove ABX-1431’s worth, however. A phase IIa trial will not yield data until next year, though a look at the Tourette’s pipeline reveals few competitive threats to worry about.

Antipsychotics are widely used to control tics – Abilify is preferred as it is considered more tolerable than older drugs of this class with, for example, fewer problems with side effects like weight gain. The cause of Tourette’s is not fully understood, but it is thought that disruptions in neurotransmitters are involved, hence the efficacy of these dopamine-targeting drugs.

Interestingly, Otsuka is still investing in Abilify in Tourette’s, despite the original formulation of the drug having lost patent protection in 2014. An oral solution of the antipsychotic is being studied in a large phase IV trial that could read out in 2021.

Abilify and other antipsychotics have shown a reduction in tics of around 50%, so this provides a benchmark before taking into account relative side-effect profiles.

Tourette’s syndrome is frequently seen alongside conditions such as attention deficit hyperactivity and obsessive compulsive disorders. Most sufferers are children, and in most cases the condition disappears or substantially improves as adulthood approaches. As such, the majority of trials are being conducted in children or young adults.

Many companies are targeting dopamine in one way or another: the VMAT2 inhibitors work by depleting presynaptic dopamine, and have demonstrated utility in other movement disorders like tardive dyskinesia. Trials with tetrabenazine, an older drug in this class, have shown promise in Tourette’s, and it was therefore a big surprise when Neurocrine’s Ingrezza (valbenazine) failed to show any impact in the T-Force Gold study.

Rather than blaming trial design or placebo effect the company’s working hypothesis is that the agent simply does not work in this particular condition. A second study, T-Force Platinum, is ongoing, and in the coming weeks Neurocrine will make a decision on whether all work with Ingrezza in Tourette’s will be ended.

The company has indicated that it is interested in testing follow-on VMAT2 inhibitors in Tourette’s, so perhaps this mechanism is not completely dead. Still, the Ingrezza setback does not bode well for Teva’s Austedo, a deuterated form of tetrabenazine that is also in late studies.

Two phase II/III trials from Teva could start reading out later this year, and could help shed light on whether Neurocrine’s problems were class- or compound-related.

Other projects are at a much earlier stage, and Lundbeck looks to have acquired one of the most interesting candidates available. ABX-1431 modulates the endocannabinoid pathway via selective inhibition of monoacylglycerol lipase, a serine hydrolase involved in the regulation of neurotransmitter balance.

This is a novel mechanism up to a point – products derived from cannabinoids also have an effect via this pathway. Some evidence exists to support a benefit for cannabinoids in Tourette’s, although, as with much of the research into these sorts of agents in neurological disorders, more proof is needed.

Therapix could soon provide such information: the Israeli company is gearing up to start a phase IIb trial of THX-110, a combination of tetrahydracannabinol and palmitoylethanolamide, which could yield results late in 2020.

Still, projects like THX-110 likely illicit a very broad effect on the endocannabinoid system. Lundbeck believes that a more targeted approach could be better: ABX-1431 selectively targets neuronal circuits that are excessively activated, it says.

A few years ago Abide conducted a phase Ib trial in 23 adult Tourette’s subjects that successfully reduced tics on various measures, though results from the ongoing 48-patient phase II study will provide a more rigorous test of the hypothesis.

It is also notable that Celgene had previously licensed ABX-1431, but last year handed the asset back to Abide in favour of a separate preclinical project, over which it presumably still has rights.

The only other project in phase II is ecopipam, a dopamine antagonist that was bought by Emalex Biosciences last year. This too has generated early data hinting at a benefit, and its new owners plan to start a 150-patient paediatric study in early 2019. This has yet to materialise, but given this project's mechanism this candidate is one to watch.

Clinical data on Abilify in Tourette's 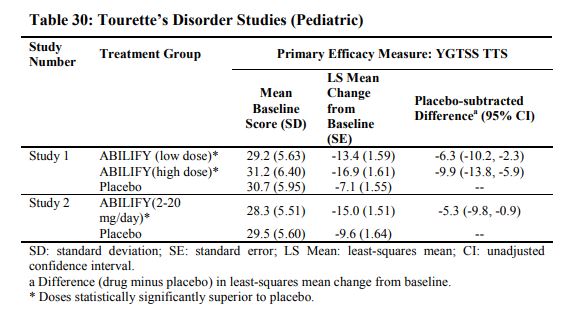