Novo takes the plunge in Alzheimer’s

Novo Nordisk is pushing Rybelsus into a pivotal Alzheimer’s trial despite the failure of the Elad study.

Is Novo Nordisk brave or foolhardy? The company’s decision to take its oral GLP-1 analogue Rybelsus into pivotal trials in Alzheimer’s next year is certainly bold – especially given the recent failure of the Elad trial of the similarly acting Victoza, and a flop this week from VTV Therapeutics, another proponent of the Alzheibetes hypothesis.

During a conference call yesterday, Novo execs were keen to point out that Elad was only part of the puzzle, and put forward a host of other data supporting its move. With academics calling for further investigation of the GLP-1s in Alzheimer’s, Novo has stepped up to the plate, and the gamble is probably one that the Danish group can afford to take.

Executives would not give a definitive figure for the cost of the two trials that are set to begin in the first half of next year and will enrol a total of 3,700 early Alzheimer’s patients between them. But the company’s chief financial officer, Karsten Munk Knudsen, said this would equate to a mid-single-digit percentage of Novo's total R&D budget over the next few years.

Novo plans to up its investment in research over this period; however, using last year’s R&D spend of $2bn as a rough guide would put the cost of the studies at around $100m.

An analysis by Evaluate Omnium, based on the costs of previous Alzheimer’s and Rybelsus trials, puts the figure higher, at around $350m.

Either way, this will not break the bank for Novo. And the group believes that it has reasons for optimism here despite the failure of Elad, an academic-led study of Victoza, Novo’s once-daily injectable GLP-1 (CTAD 2020 – Elad fails, but GLP-1s could still have a future in Alzheimer’s, November 6, 2020).

Martin Holst Lange, senior vice-president of global development, noted that the Covid-19 pandemic had led to some missing data in Elad that might have affected the results. He added that Elad, which enrolled patients with mild Alzheimer’s, covered a different population to the one Novo will evaluate in its phase III trials, which will encompass both mild cognitive impairment and early Alzheimer’s.

He then pointed to a body of evidence that, Novo believes, supports its decision. Perhaps most intriguingly, a post-hoc analysis of the group’s cardiovascular outcomes studies of its various GLP-1s found a 53% lower risk of dementia in patients receiving the drugs versus those on placebo. 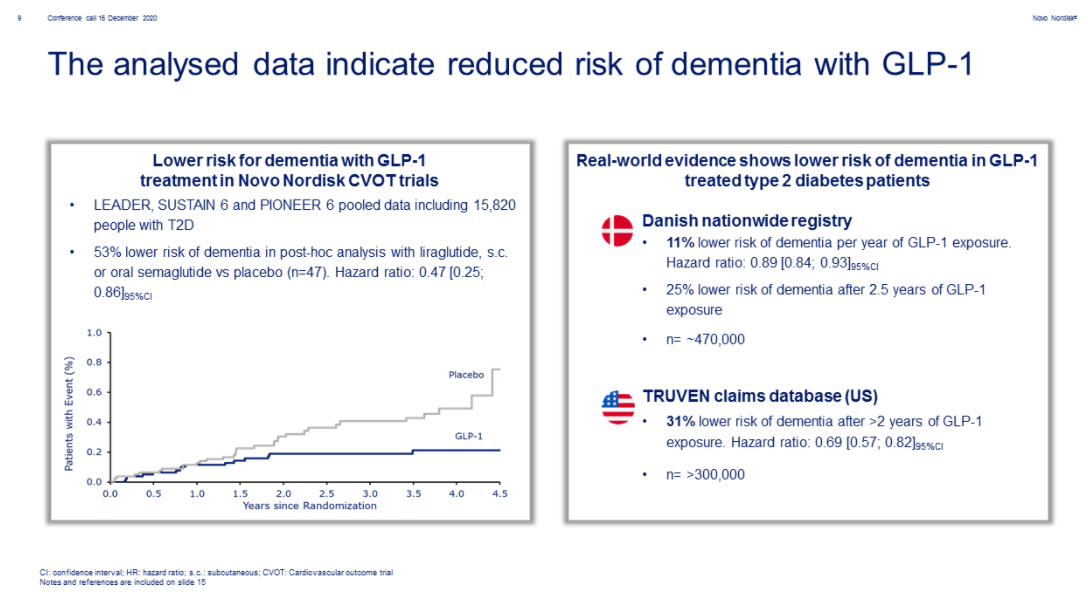 This analysis does not have the rigour of a prospective clinical trial, and Novo’s other supporting data come from real-world registries and animal studies. It is surprising that the group is going straight into pivotal development without testing its hypothesis in a smaller phase II trial.

Perhaps time is of the essence. The two trials will take three to four years to complete, executives said yesterday. And other diabetes drug developers might also want to get in on the act.

The most obvious would be Lilly, which has an injectable GLP-1 in the shape of Trulicity, and also an interest in Alzheimer’s. A post-hoc analysis of the Rewind trial of Trulicity found a 14% decrease in cognitive impairment in those receiving the drug.

A spokesperson for Lilly told Evaluate Vantage that the group does "not currently have plans to study our diabetes portfolio in Alzheimer’s disease" but continues "to monitor developments".

GLP-1s have shown a “multitude of activities” that might be relevant in Alzheimer’s, according to Novo’s chief scientific officer, Mads Krogsgaard Thomsen, from metabolic and blood flow improvements to anti-inflammatory effects.

However, another company banking on a connection between Alzheimer’s and diabetes has fallen short for a second time. After hours on Tuesday, VTV Therapeutics’ Rage inhibitor azeliragon flunked the phase II Elevage study in patients with mild Alzheimer’s plus type 2 diabetes.

The asset had already crashed in a pivotal trial in Alzheimer’s without diabetes two years ago. The latest failure sent VTV's stock down 23% yesterday.

Novo saw a better reaction from the market to its news, with its shares climbing 3% yesterday. The consensus seems to be that studying Rybelsus in Alzheimer’s is a risk worth taking.

This story has been updated to include comments from Lilly.