The Swiss marriage that never was

In 2001 Novartis thought it had cornered Roche, and a Swiss megamerger was on the cards. After 20 years of stalemate the awkward tie-up has ended.

If you replaced oil with drugs, and changed Denver for Basel, you could almost see the Colbys squaring off against the Carringtons. And for a while, with a maverick Swiss financier going behind Roche’s back to hand an equity stake to its local nemesis, Novartis, the stage was set for a drama with a plot worthy of Dynasty.

But instead stalemate ensued, and that equity stake – a “financial investment with a strategic element”, as it was then billed – became a millstone that Novartis could only justify because it was yielding a decent return. Today, 20 years on, it all came to an end, and Novartis crystallised its gains with a $20.7bn windfall.

On the face of it accumulating a 33.3% stake in Roche’s voting shares was one of the best investments Novartis could have made: as the pharma sector’s fortunes waxed and waned the stake’s value grew by a compounded 4.4% a year. Including accumulated dividends of some $6bn the CAGR was 6.6% in Swiss francs, or an even more impressive 10.2% in dollars.

But it was never meant to have been that way. Perhaps the most telling part of this morning’s announcement was that “Novartis does not consider the financial investment in Roche as ... a strategic asset”.

In May 2001, four years before Vas Narasimhan even joined Novartis, the current chief exec’s charismatic predecessor, Daniel Vasella, had set his sights on a Swiss pharma megamerger that would result in a behemoth to rival Pfizer. Mr Vasella had recently merged Ciba Geigy and Sandoz to form Novartis, and the next stage was an acquisition of Roche.

Step forward Martin Ebner, whose BZ Gruppe held 20% of Roche’s voting equity. Mr Ebner had already shaken up the cosy world of Swiss finance, and he had tried to persuade Roche to give up its dual equity structure, whereby the secretive Oeri-Hoffmann families, mere minority overall shareholders, controlled Roche by virtue of owning a majority of its voting capital.

When Mr Ebner’s approach fell on deaf ears in a fit of pique the financier picked up the phone to Mr Vasella, and almost overnight a deal was struck. For $2.8bn Novartis became 20% owner of Roche; subsequent market purchases took the stake to 33.3%, and Mr Vasella was poised to strike.

But Roche’s controlling families were having none of it, and stood firm. Unable to move one way or the other, and without even a seat on Roche’s board to influence strategy, Novartis had merely tied up billions of dollars that it could have spent elsewhere – on biotech M&A, for instance.

No M&A no problem?

If Novartis’s M&A efforts were hamstrung it probably matters little. The actual biotech acquisitions it did do hardly set the world alight, and in the meantime Roche’s stock surged, driven by that group’s early moves into biotech R&D and the cancer immuno-oncology revolution.

Today Roche can say that it is a far stronger company than it was in 2001, when it was reeling from the US market flop of the obesity drug Xenical and the unwinding of the convoluted financial investments that had led some to call it “a bank with a pharma company attached”. On the other hand, Novartis today faces a somewhat less certain future, and the stake sale gives it the firepower to do some major biopharma M&A (What Novartis could buy with its windfall, November 4, 2021).

So does everyone win? Kind of. From a position of strength Roche, in no need of big M&A, has done the next best thing – a massive share buyback in one fell swoop, with no complex market auction. It has got the Novartis monkey off its back, drawing a line under what was in many ways an embarrassing arrangement.

An irony: even though Roche has blown $20.7bn its EPS will actually benefit, thanks to the reduced shares in issue. And the controlling family’s grip on the group has tightened further, by taking 33.3% of potentially tradable voting stock out of circulation.

Novartis, meanwhile, has turned $5bn into almost $27bn, and with capital freed up it can now go shopping. It will no longer be able to consolidate part of Roche’s profits as a share of associates, but as this was purely a financial arrangement the only practical difference will be the loss of Roche’s dividend income.

All Novartis needs to do now is spend the cash boldly and wisely. 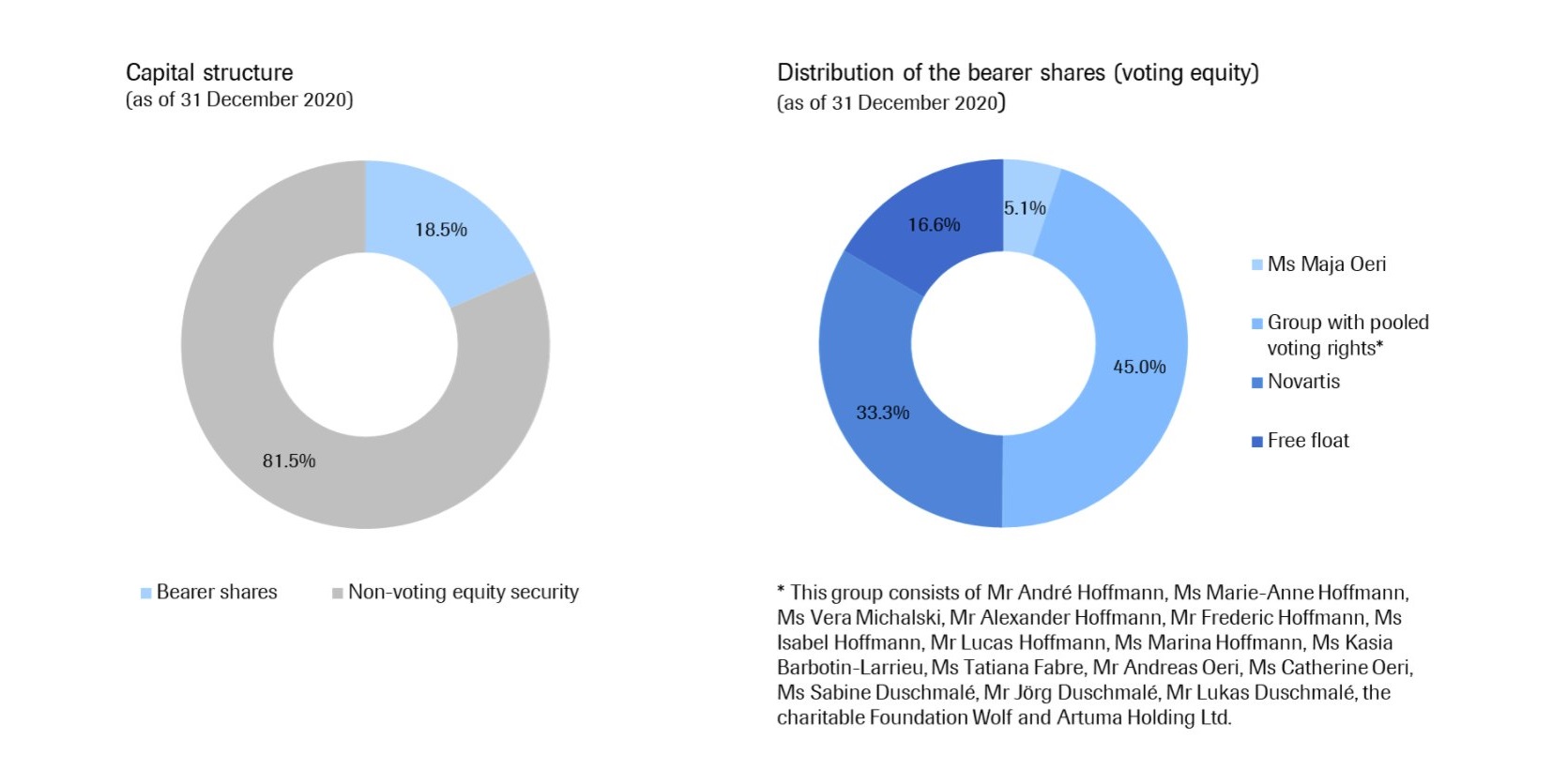 Roche's capital structure before today's deal. 33.3% of the voting shares will now be taken out of circulation. Source: Roche.
Corporate strategy

Astra presses on with bispecifics