Which direction for Turning Point?

Turning Point is heading into a highly competitive lung cancer niche with its lead project, which still has much to prove.

Big pharma’s enthusiasm for targeted cancer drugs has bestowed a benefit beyond the takeout of companies like Array Biopharma and Loxo Oncology. Valuations of independent players have also received a boost: Turning Point Therapeutics, for example, sports a $1.3bn market cap based largely on a phase I project, repotrectinib.

The kinase inhibitor has shown promise in a handful of patients with Ros1 and NTRK-driven tumours, including some who have failed prior therapies; there is a substantial need for new options for patients who fail on front-line treatments like Xalkori. However, repotrectinib has also exhibited some worrying toxicities, including being associated with one patient death, while its durability remains to be established.

The company’s valuation arguably ignores these red flags; indeed, since its April IPO, Turning Point’s market cap has more than doubled. The M&A boost cannot be ignored, of course, but with a more rigorous trial only just getting under way it will be some time before investors – and potential buyers – get a better look at repotrectinib.

The concerns about repotrectinib would arguably matter less if Turning Point was focusing squarely on patients whose tumours have acquired resistance to first-line targeted therapy; repotrectinib has been specifically designed to circumvent mutations that allow tumours to start growing again, despite initially responding to another kinase inhibitor.

But data at Asco raised hopes for the project’s chances in the first-line setting, a space in which Turning Point would be up against the big beasts of the sector, Roche and Pfizer. This makes it crucial for repotrectinib to show some best-in-class properties, and the company last week started a potentially registrational stage of its phase I/II study, Trident-1. Data are due in the second half of next year.

Repotrectinib hits ALK, Ros1 and NTRK, though investors are most focused on the opportunity in Ros1 for now. This mutation drives a small proportion of non-small cell lung cancers, for which Pfizer’s Xalkori is currently the only approved agent. Xalkori could soon be joined by Roche’s entrectinib, however, which is due a US FDA decision by August 18; this agent also hits ALK, Ros1 and NTRK fusions.

The Swiss pharma giant has generated some compelling data and, importantly, entrectinib can travel into the brain, something that Pfizer’s drug cannot do.

The table below shows why Turning Point harbours ambitions beyond the TKI-failure population. Response rates look very competitive – notwithstanding the usual caveats about cross-trial comparisons and the small number of patients receiving repotrectinib so far – and repotrectinib is also active in the CNS.

Ahead of the Asco data repotrectinib’s place was largely seen in later lines; Turning Point has presented compelling evidence of utility in patients with a solvent front mutation, for example, the most common form of resistance to Xalkori. Neither Xalkori nor entrectinib has shown activity in tumours with these mutations or other types of resistance mutations.

But Turning Point is not alone here, and Pfizer’s follow-on TKI Lorbrena is the one to watch. This drug hits both ALK and Ros1, and last year won approval to treat patients who had failed initial ALK inhibitor therapy. Pfizer told Vantage that it was continuing to assess the data in Ros1 patients, to determine whether “a regulatory path is appropriate”.

Response rates are not the end of the story here, and investors are keenly awaiting longer-term data on duration of remission to therapy. This will be important in naive and pretreated patients alike; the relatively fast relapses seen by a few patients in the repotrectinib data presented at Asco was an area of concern for some investors.

In a response to a question from Vantage, Turning Point said durability data were still evolving, and that multiple patients had responded recently, which is why their remissions were still quite short. 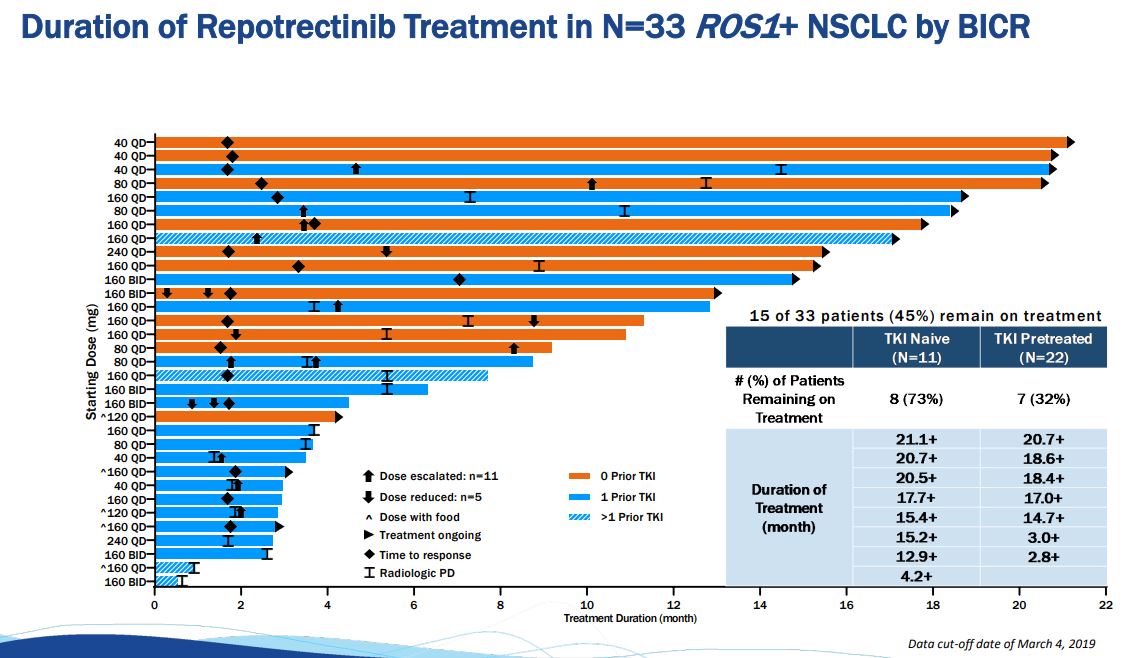 Another red flag for this project is safety. Around half of patients experienced dizziness, and in three cases this prompted a dose reduction. A case of sudden death has also been judged as possibly related to repotrectinib.

It is also worth noting that the FDA has yet to sign off on Turning Point’s chosen dosage for the registrational phase of the Trident-1 study, even though the company chose to herald the start of recruitment in a press release last week.

Repotrectinib could well emerge as an important tool to treat patients who no longer respond to first-line therapies, and there are certainly encouraging signs of broader utility. But there are also reasons to remain cautious. Interest from a big player will be the ultimate test of this project, and if Turning Point approaches the market as an independent entity investors should really start to worry.

Big pharma catalysts to ring in the new year

Turning Point on the straight track, but to where?