Yumanity finds a shell in Proteostasis

Yumanity Therapeutics wants to be at the forefront of a neurodegenerative disease revolution, but is taking an unglamorous route to get there.

In reversing into Proteostasis, Yumanity Therapeutics made much of the two companies’ shared interest in protein misfolding. But in reality, it looks like the neurodegeneration player just wanted a public shell to call home.

One question is why Yumanity, which is positioning itself as a group at the forefront of a revolution in neurodegenerative diseases, could not drum up interest for its own IPO. True, investors might be put off by this notoriously difficult field, but other neuro players such as Denali have managed to rake in the cash at a similarly early stage.

Despite Yumanity’s hubris, it only has one project in the clinic: YTX-7739, in phase I for Parkinson’s disease, with initial patient data due in the second quarter of next year.

The project is designed to inhibit the enzyme stearoyl-CoA-desaturase (SCD), thereby protecting neurons against the toxic effects of pathogenic α-synuclein. A misfolded version of this protein is seen in Parkinson’s and various companies are evaluating anti-α-synuclein MAbs – but none are developing SCD inhibitors for the disease, according to EvaluatePharma.

Indeed, all of Yumanity’s projects take aim at novel targets. The company describes its approach as applying oncology R&D principles to neurodegeneration, by looking for more easily druggable targets within the network of a better-known but trickier-to-hit target.

During a conference call yesterday, the cancer analogy given by Yumanity’s chief executive, Richard Peters, was the development of mTOR inhibitors to get around the difficulty of hitting the RAS gene.

Mr Peters boasted of Yumanity’s prolific drug discovery engine and the fact it has uncovered more than 15 novel targets. However, details on these are scant – the group’s next most-advanced project, YTX-9184, is another SCD inhibitor. 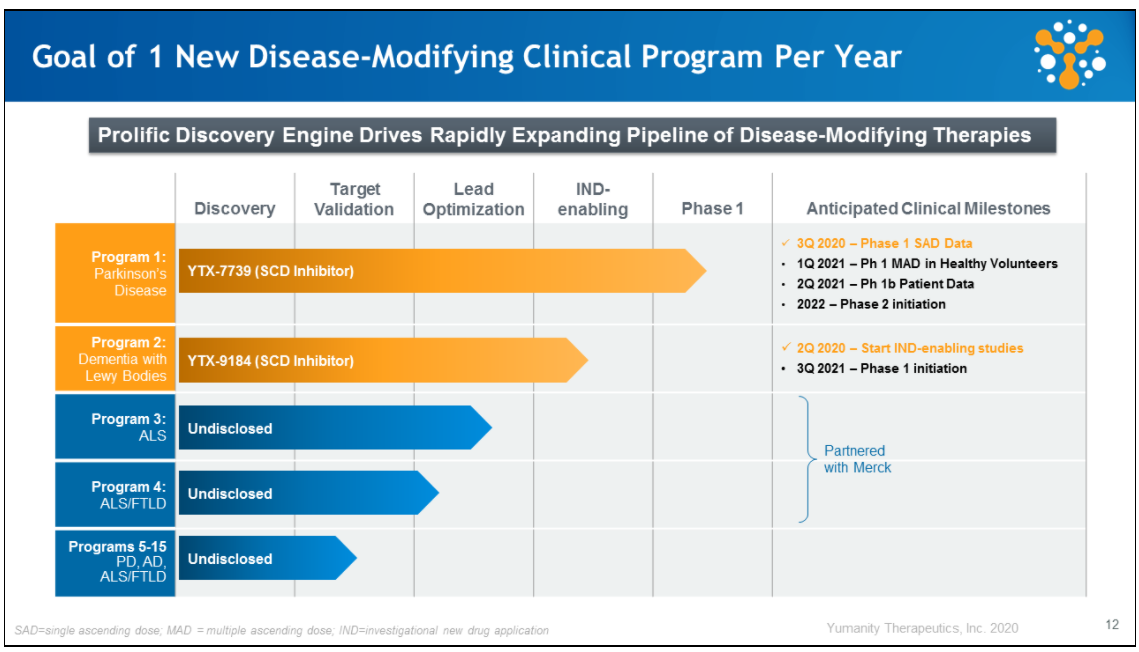 Still, two of the company’s preclinical assets – in amyotrophic lateral sclerosis and frontotemporal lobar dementia – are partnered with Merck & Co under a deal worth up to $500m. Yumanity also managed to attract the venture arms of other large drug makers in previous funding rounds, including Biogen, Pfizer and Sanofi.

Yumanity, which aims to put one new project into the clinic each year, says it has raised over $100m in venture funding and has enough to last it until 2022.

As for Proteostasis, this is an ignominious end for a company that had once hoped to compete with Vertex in cystic fibrosis – though, in truth, the writing was on the wall since the blow up last year (The bubble bursts for Proteostasis, March 25, 2019).

Only five full-time Proteostasis employees will remain in the new company, marking a 79% reduction in headcount. And the group hopes to sell off Proteoastasis’s CF projects – although it is unclear who might bite given Vertex’s dominance of the space.