No margin left for error at Acorda

Generic versions of Acorda’s Ampyra are about to flood the market, meaning that the company desperately needs a timely approval in October for its next big hope.

Time’s up for Ampyra, appeal court judges decided yesterday, in a decision that looks likely to herald the launch of several generic versions of the multiple sclerosis therapy. The news is a huge blow to the drug’s developer, Acorda, and investors promptly erased a quarter of the company’s market value yesterday.

More pain could be on the way for Acorda if the FDA’s review of Inbrija fails to conclude with an approval by the October 5 PDUFA date – the Parkinson's disease candidate represents the company’s only hope of replacing Ampyra sales any time soon. Previous problems with the filing and the fact that Inbrija comprises a novel inhaler mean that a timely green light is far from assured.

At Acorda’s second-quarter results in August company executives insisted that they were not aware of any reason why the Inbrija decision might be delayed. However, they also admitted that the submission involved several arms of the US regulator – the FDA will include its device and pulmonary divisions in deliberations – which at the very least could mean that the agency might end up simply needing more time.

Inbrija is an inhaled, dry-dose levodopa formulation targeted at Parkinson’s patients who experience "off" periods from their carbidopa/levodopa regimen. With few options available to help patients who suffer from the reappearance of symptoms during these "off" periods, Acorda is confident of commercial success.

The FDA will need more than unmet need to satisfy it, however. Inbrija represents the first time the agency has seen this device technology, and reviews of novel inhalation devices have been known to progress slowly in the past. Another reason for caution is the fact that the FDA refused to accept Acorda’s initial NDA for Inbrija back in mid-2017, complaining that the filing was not sufficiently complete and asking for more information. 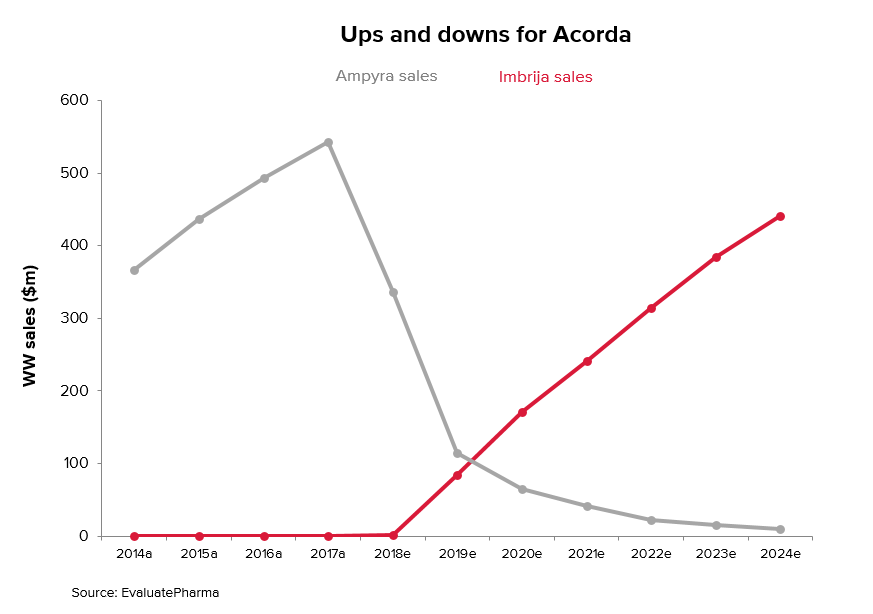 Inbrija is the product of a pulmonary delivery system that Acorda gained in 2014 when it bought Civitas Therapeutics for $525m, so in many ways this approval decision will also be a verdict on that acquisition. Acorda has projected peak Inbrija sales in the US of more than $800m, and the sellside has pencilled in approval this year, followed by a fairly healthy launch.

The Ampyra decision yesterday means that it is even more important for this rosy outlook to come to pass. Acorda losing the case on appeal was always likely after a lower court previously ruled to invalidate the product's remaining patents on the basis of obviousness; even so, some investors were apparently betting on a different outcome.

The sellside had adopted a cautious stance, and consensus forecasts from EvaluatePharma already reflect a steep drop in sales this year. And Acorda has been building its cash pile just in case, ending the quarter with $392m in the bank.

But the company cannot boast a strong developmental track record over the past couple of years. An experimental Parkinson’s therapy, tozadenant, was scrapped late last year on a safety signal, and in 2016 Acorda binned work on Ampyra in stroke patients. The company can probably weather a short delay on Inbrija. Anything more than that would be disastrous.

Upcoming events – Life beyond sola and Ampyra for Lilly and Acorda