Abbvie cuts Humira to the quick to retain European share

Breaking news from Bernstein analyst Ronny Gal this afternoon on the Humira biosimilar fight in Europe: Abbvie has managed to win the first national biosimilars tender by agreeing to supply the product at a huge 80% discount to the brand’s existing price. Biosimilar discounts of more than 50% are not unusual in Europe, but 80% from the offset for the new Humira market is much steeper than expected. Abbvie’s aggressive move took its stock down 4%; executives had previously guided to a 20% drop in European Humira sales by the end of 2019, an estimate that is likely to be retracted on Friday when the company reports earnings, Mr Gal commented. The makers of Humira biosimilars are also likely to be nervously looking at their assumptions – five companies including Mylan and Amgen have won approval for copycat versions of the antibody, though consensus forecasts are only available for Amgen’s Amjevita. The European biosimilars market is considered a bright spot for manufacturers of these lower-cost biologicals, who have largely been thwarted in the US and will be alarmed by this rapacious move to retain market share. Other brand name manufacturers facing similar competition will be watching how this situation develops with interest.

The sellside's view of European sales 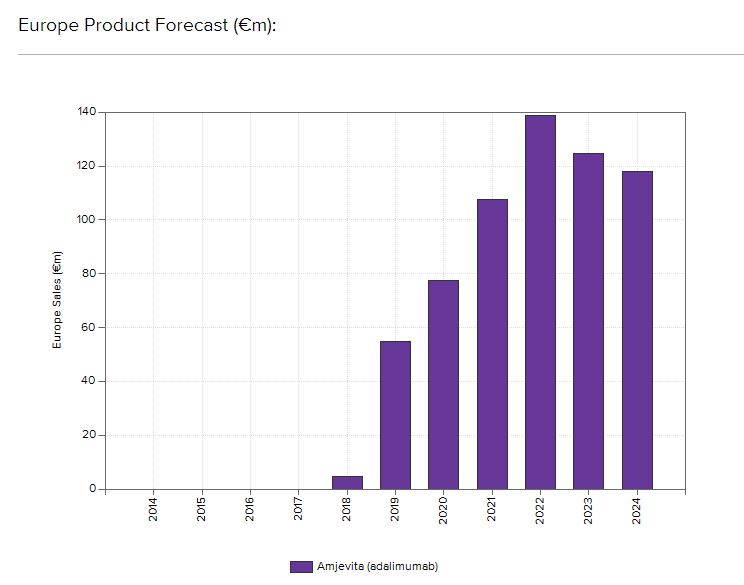 End of an era for Humira – in Europe at least

Abbvie manoeuvres to defend Humira to the last