Nexstim’s dream of getting its neuromodulation device approved in stroke is over after another trial failure, and it might be the end of the road for the company, too. The Finnish group tried to put a brave face on things, saying it would focus on depression and chronic neuropathic pain. But, to keep going beyond the second quarter of 2019, Nexstim needs to raise funds – something that now looks nearly impossible. The few investors that had kept the faith after the previous stroke failure in 2016, in the Niche study, saw the writing on the wall this morning and sent Nexstim’s stock down 65%. Like Niche, the latest trial of the group’s Navigated Brain Therapy (NBT) system, called E-Fit, was also scuppered by a high response in the sham control arm, despite Nexstim’s efforts to counter this with a new sham procedure. The company does have one FDA approval under its belt for the NBT device, in major depressive disorder, but first-half sales totalled just €1.1m ($1.3m), suggesting that doctors are wary of transcranial magnetic stimulation in this indication. Another failure in stroke will surely only increase any scepticism. 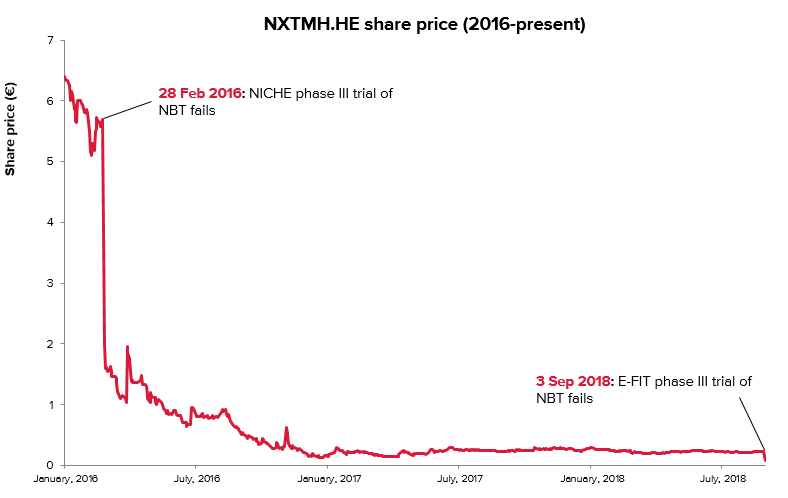 Nexstim’s value wiped out at a stroke

No calm after Brainstorm ALS failure

Abbvie’s next migraine contender looks good, but watch the side effects