Firmer evidence to support Assembly’s approach to vanquishing the hepatitis B virus will not emerge until next year, and rivals are not standing still in the meantime.

Assembly Biosciences’s recent share price jump on data presented at the AASLD meeting looks to have been short lived. An update on an ongoing mid-stage trial of ABI-H0731 confirmed the hepatitis B project’s impact on various markers of viral infection, but it is becoming increasingly clear how far the company still has to travel.

The real measure of ABI-H0731’s efficacy will occur when dosing is withdrawn from virally supressed patients – Assembly confirmed this week that phase of the study will not start until next year. On a conference call executives also talked up the apparent superiority of a follow-on project, ABI-H2158, which is further behind in phase Ib. Should this asset start to look like the horse to back here the road ahead for Assembly will look even longer.

Assembly’s focus is on core modulation: ‘0731 and ‘2158 both target the virus’s replication machinery. The company is not alone here, with Roche’s RO7049389 and Johnson & Johnson’s JNJ-6379 considered the biggest competitors. It is thought that agents that work in this way could become vital components of any future combination hep B therapies.

J&J is already testing this theory: the first data from a triple combo trial emerged at AASLD, showing encouraging viral suppression using a cocktail of JNJ-6379, a closely watched RNAi candidate licensed from Arrowhead, JNJ-3989, and a nucleoside inhibitor.

Roche’s plans for RO7049389, also known as RG7907, are not immediately clear; the group has presented phase I data at previous liver conferences, but further studies have not been started, and the company would not answer specific questions about this asset. Roche is certainly invested in hepatitis B – it recently paid $200m for a phase I Dicerna RNA-based therapy – and much will be read into any decision to scrap or push ahead with its core inhibitor.

Hepatitis B infection is driven by very complex and poorly understood biology, and it is still unclear which biomarkers are most useful in assessing a patient’s long-term response.

What is widely accepted is that any effective hep B agent must show dramatic suppression of viral DNA, RNA and surface antigen, known as HBsAG. The hep B virus uses these fragments to trigger rebounds, though ultimately its life source is believed to be cccDNA, a minichromosome that it deposits in liver cells. Researchers believe that if levels of viral DNA, RNA and HBsAG are suppressed for long enough cccDNA will start to decay and a “functional cure” will be achieved.

This is termed functional because integrated viral DNA is likely to remain in the host; this is not thought capable of reviving an infection, however.

Viral DNA can be effectively suppressed by existing nucleotide inhibitors, so declines in viral RNA and HBsAG in particular are considered crucial measures of any new therapy. It is on HBsAG measures that Assembly has disappointed: at an update at EASL in April, in a study of treatment-naive subjects given ABI-H0731, no patients had registered declines in HBsAG of greater than 0.5 logs. By the time of an update at this year’s AASLD, only one patient (4%) had passed that threshold.

In a larger trial of patients already suppressed on a nucleotide inhibitor, the results are slightly more encouraging, with seven (10%) showing a greater than 0.5 log decrease in HBsAG. The company’s explanation has largely rested on the mechanism by which core inhibitors work, meaning that this measure will take time to drop. 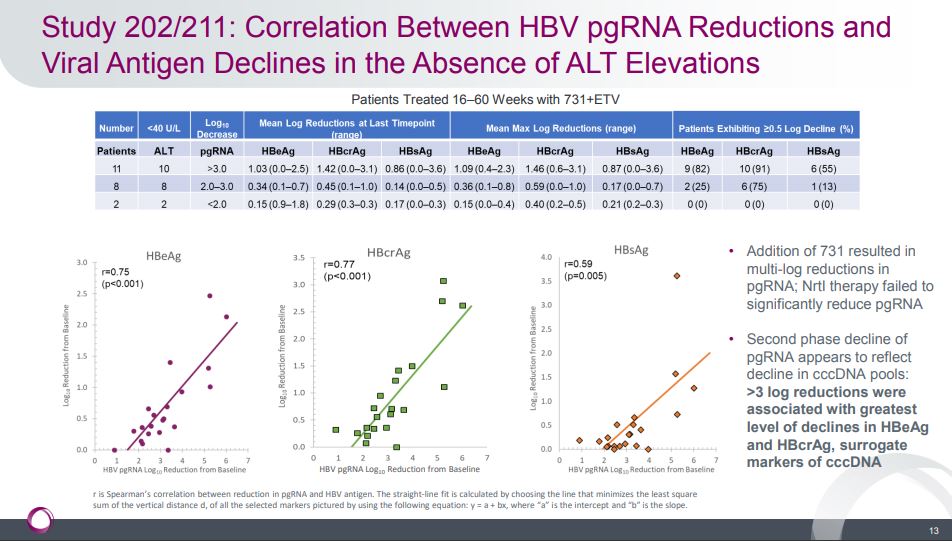 At AASLD Assembly backed this up with presentations of impressive reductions in viral DNA and HBV pregenomic RNA (pgRNA), which it claims are surrogate markers of cccDNA decline. Executives have also been pushing the theory that, because integrated viral DNA is actually a large source of HBsAG, this marker might not be as important as presumed. Supressing markers of viral RNA could be more important, in terms of achieving a functional cure, they believe.

Downplaying the relevance of HBsAG will be a hard argument to make while investors are focused on this measure. And, because cccDNA levels can only be measured by liver biopsy, the theory is hard to prove in the absence of longer-term results.

This is why data due next year from Assembly, on patients that have had ‘0731 withdrawn, are so important. Until the company can prove that other markers of infection matter as much as HBsAG, many will chose to remain sceptical.

EASL 2020 – Assembly finds a partner as hepatitis B inches forward

Vir bids to enter the hepatitis B race

Looking for new mechanisms to cure hepatitis B