Amarin must hope that setbacks for Astrazeneca and Acasti show that in Vascepa it has the secret sauce.

Amarin could not have hoped for a much better start to the week. Two potential rivals, Astrazeneca's Epanova and Acasti's CaPre, look to have fallen by the wayside, removing key threats to the fish oil-based product Vascepa; competition is frequently cited as a reason for why takeover bids for this company have failed to emerge.

One way to read these setbacks, the failure of Astrazeneca’s Strength trial in particular, is that a class effect for fish oils has been ruled out. While at face value this looks positive for Amarin it might not necessarily be good in the long term, particularly as the mechanisms responsible for Vascepa’s benefit remain unclear.

This can be said about many drugs, of course, including statins. This class proved that potently lowering LDL can also reduce cardiovascular risks, though the precise mechanisms of benefit are not fully known. But statins became a huge success commercially because several slightly different compounds showed the same thing, giving physicians the confidence to prescribe them widely.

This is not to refute Vascepa’s benefit, which was convincing enough to win the product a risk-reduction claim on its US label last month. But Amarin could be alone in extolling this type of product's benefit, which it must also argue is sufficiently different from others to explain the contrasting results.

Vascepa is the only advanced fish oil product composed of pure eicosapentaenoic acid (EPA) – Epanova and CaPre, which also failed a phase III today, also contain docosahexanoic acid (DHA). So, while today’s developments seems to rule out two competitors to Vascepa, for Amarin to really benefit they also need to yield evidence that they were never even in the same bucket.

Advocates of the “pure EPA” theory have long argued that this is the case, largely because DHA can raise LDL-cholesterol levels, muting the beneficial effects of EPA. Until Astrazeneca details the data from Strength firm conclusions are hard to draw – all the company said today was that the study was to be closed after an interim review saw little chance of success.

Strength recruited similar types of patient as Vascepa’s successful outcome study, Reduce-It, though at 13,000 subjects the trial was around 60% larger. An immediate question is whether patients were exposed to sufficient levels of EPA with Epanova, which contains almost half as much as Vascepa.

The implications of the failure of Acasti’s first phase III study are harder to call; shares slumped 66% in early trade, with the Astrazeneca failure no doubt adding to reasons for investors to flee this morning. The Canadian company is only at the stage of proving CaPre’s ability to lower triglyceride levels, which the Trilogy-1 study unfortunately demonstrated in both the active and control arms.

A handful of rogue sites were blamed for the unexpectedly high placebo response, and Acasti presented a collated chart of fish oil studies that does indeed suggest bad luck. A second, near-identical study, Trilogy-2, will read out by the end of February, but the best-case scenario seems to be a substantial delay in getting CaPre to market. 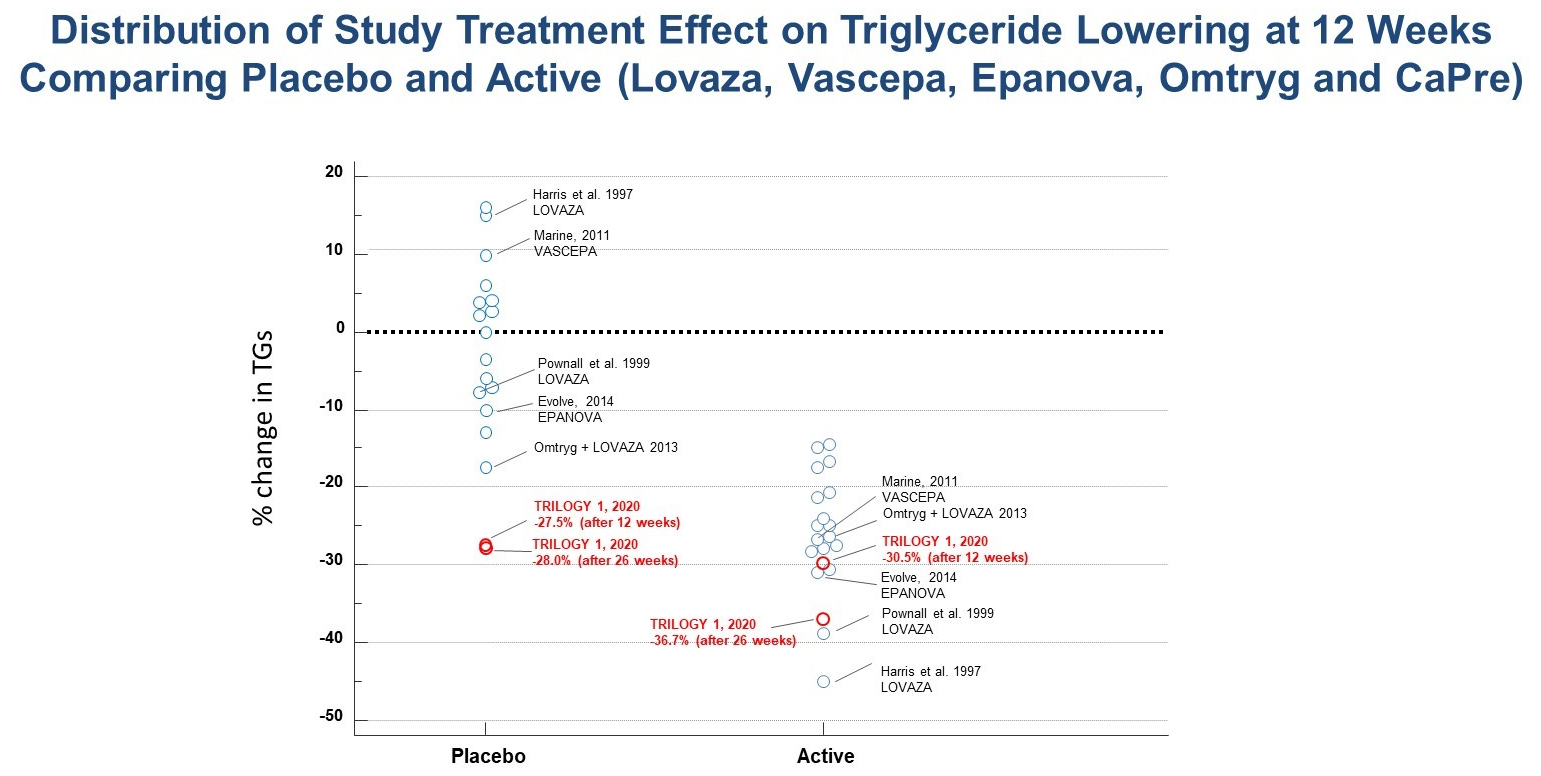 Amarin’s shares climbed 7.6% this morning, and it seems likely that investors will be unwilling to push the company’s valuation much higher until Vascepa’s patent life is confirmed. A summary judgement last October was seen as improving Amarin’s chances of winning a case against two generic challengers that starts today, and that is expected to conclude by April.

The sellside is largely confident of either a settlement or victory for Amarin; a previous settlement with Teva allows the Israeli generics firm to launch in August 2029, and this date presumably represents the backstop to the Vascepa opportunity.

With the competition felled and the court case won, acquirers will then come calling, the buyout bulls cry. But there is a final point to remember: Novartis was the sole bidder for The Medicines Company, and big pharma in general is now remains of the cardiovascular space.

Amarin lands the catch of a lifetime