Early stage schizophrenia data have seen the group double in value, but there are a couple of sticking points.

The first clinical data Cerevel Therapeutics has released since reversing into a Spac and gaining a market listing last summer have seen the company nearly double in value. Champagne corks must be popping all over – but there are reasons for at least some caution.

First is the puzzling relationship between dose and response, with the 30mg once-daily dose of the company’s schizophrenia candidate CVL-231 outperforming 20mg twice daily. Second is the project’s safety, which is pretty good but not wholly clean. Still, Cerevel having added $1.5bn to its market cap, perhaps those are worries for another day.

Following six weeks of treatment with its muscarinic M4 positive allosteric modulator CVL-231, patients in the phase 1b trial had statistically significant improvement in PANSS total score as well as the positive and negative scores. 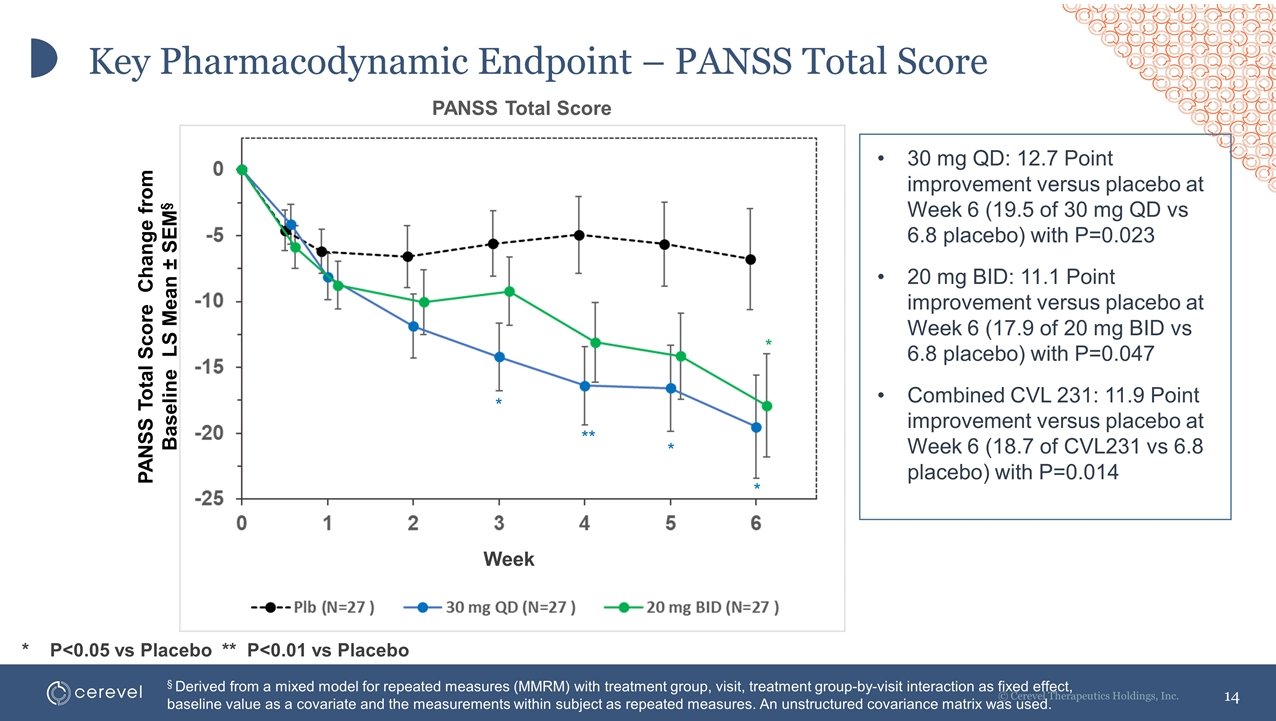 Putting this into competitive context, Karuna’s M1/M4-preferring agonist KarXT achieved a statistically significant PANSS reduction of 17.4 points – 11.6 points over placebo – in its phase 2 study. Stifel analysts, writing ahead of Cerevel’s readout, were seeking a PANSS reduction for CVL-231 of 14-20 points, and a placebo-adjusted reduction of 5-6 points.

Cerevel easily beat this expectation, with a placebo-adjusted reduction across both doses of 11.9 points. On a conference call Cerevel management sidestepped the question of the higher efficacy in the lower dose group, saying simply that it would look at the pharmacokinetic data, which it is expecting “in the coming days”, to better understand it.

This means that Cerevel’s asset looks similarly potent to Karuna’s broader muscarinic agonist, which is currently in phase 3 trials. The hope for Cerevel is that CVL-231, being more specific, can have a cleaner safety profile.

That remains to be proven, with ’231’s safety possibly slightly worse than KarXT’s. Two patients on high-dose CVL-231and one on the lower dose had a serious treatment-emergent adverse event, versus none on placebo. One of these events was an exacerbation of schizophrenia, but it is not clear in which dose arm this occurred.

In KarXT’s trial there was one serious adverse event with the therapy and none with placebo.

Cerevel said that rates of headache, heart rate and blood pressure increases, as well as gastrointestinal side effects, extrapyramidal symptoms and weight gain, were similar with its project and placebo. Rates of discontinuation were almost identical, at 22% for both active and placebo arms; in KarXT’s phase 2 trial the rates were 20% for therapy and 21% for placebo.

Still, Cerevel has an ace up its sleeve: unlike KarXT, CVL-231 was not titrated, so undifferentiated safety might still translate into an incremental advantage.

On the call the company said it would wait for receptor occupancy data before deciding which dose or doses to take into the planned phase 2 trial. It also has plans to investigate ’231’s use in additional related indications including dementia-related psychosis.

Cerevel’s many new investors will be watching closely to see how the project’s new trials play out. But for now it is sitting pretty – and has replaced the disappointment that was Immunovant as the exemplar of a successful Spac deal.