Sarepta’s first ever controlled study, of a Duchenne muscular dystrophy gene therapy, brings the markets down to earth.

A remarkable fact about Sarepta, until yesterday a $13bn company, is that it had never demonstrated the efficacy of any of its projects in a placebo-controlled trial. This was to have changed with the phase II Study 102, but instead that trial’s outcome has dealt sentiment a blow.

Study 102, testing the micro-dystrophin gene therapy SRP-9001 in 41 Duchenne muscular dystrophy patients, has failed, Sarepta revealed after market close yesterday. This is bad news for investors, today nursing 50% overnight losses, and Roche, which had paid $750m for SRP-9001 rights in late 2019; the immediate beneficiary is Pfizer’s rival DMD gene therapy, PF-06939926, which is in phase III.

So far SRP-9001 had been seen as more promising than PF-06939926 – albeit on the basis of cross-study comparisons of individual case reports. In four phase I subjects SRP-9001 had shown increases from baseline in micro-dystrophin protein expression and North Star Ambulatory Assessment (NSAA) score.

Study 102, however, had set out to prove this against placebo, setting NSAA score at 48 weeks as its key functional endpoint.

Though SRP-9001 did appear to improve NSAA from baseline, by 1.7 points, placebo recipients saw a 0.9-point increase, and the difference was highly statistically insignificant (p=0.37). 12-week micro-dystrophin expression, the biological co-primary endpoint, was positive versus baseline, but without a functional benefit this lacks relevance.

This would not be biotech without a spirited defence of poor data. Sarepta’s is based on the claim that Study 102’s two cohorts had imbalanced baseline characteristics – despite earlier playing up how well balanced the trial was at investor conferences.

Still, with a trial in just 41 subjects there is only so much that can be done to balance its cohorts. Sarepta seems to have focused on balancing by patients’ age (4-5 and 6-7 years old), but the problem, it now claims, is that among 6-7 year-olds baseline NSAA scores were uneven, and placebo recipients were relatively fitter.

This fact, it claims, drove the co-primary endpoint failure. In 4-5 year-olds, whose characteristics were well matched, NSAA rose by 4.3 versus 1.9 points, yielding a nominal p value of 0.0172. Some analysts bought the excuse: Mizuho, for instance, called the setback a “speed bump”, and simply delayed SRP-9001’s expected launch by two years to 2024.

Evercore ISI, however, was more sceptical, saying the implication that placebo numerically outperformed SRP-9001 in the older children confounded the claim of efficacy in younger ones. And, since baseline NSAA was similar between both age groups’ active cohorts, the relative underperformance of older versus younger children makes it even harder to understand any signal. 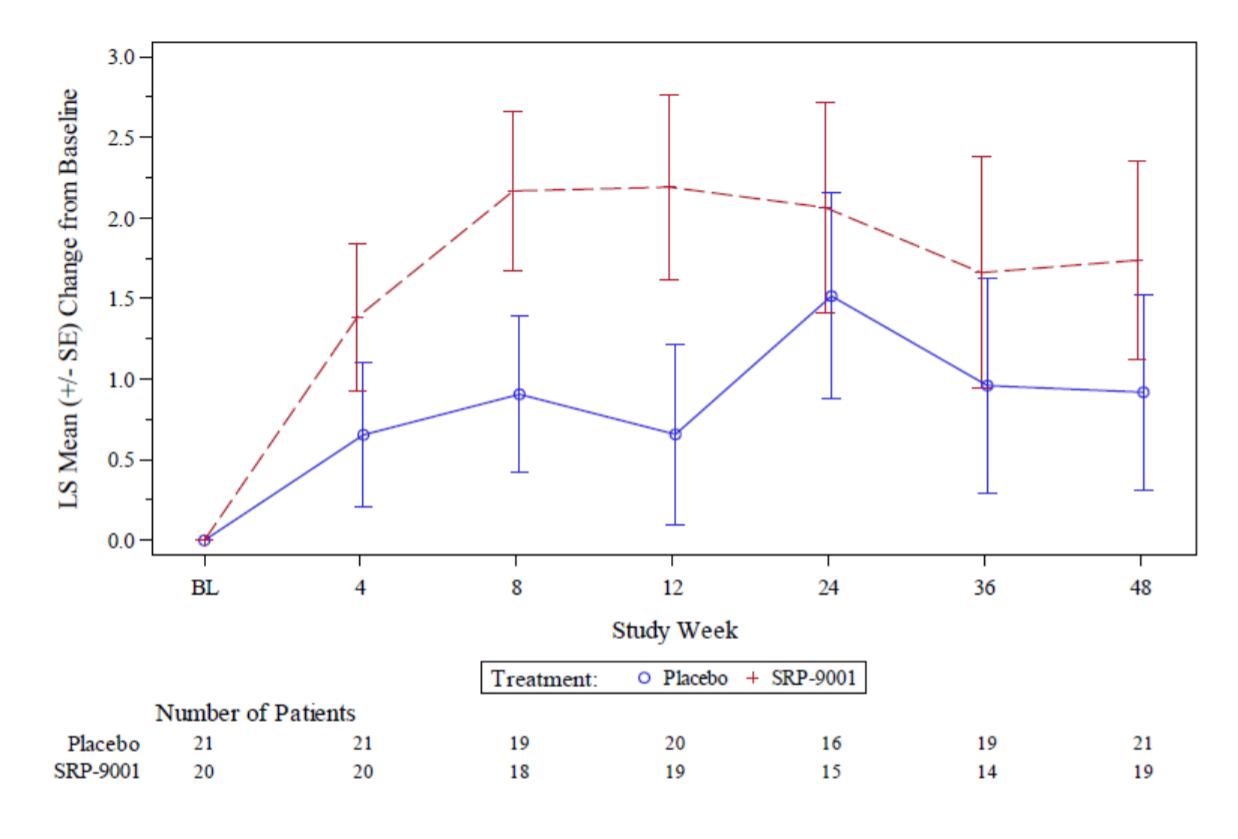 The setback could give Pfizer the upper hand. With the safety of gene therapies coming under increased scrutiny SRP-9001, with one rhabdomyolysis report and liver enzyme elevations, looked cleaner than PF-06939926, which has been associated with three serious events, two due to complement activation.

In December 2019 Roche had struck the largest-ever licensing deal for a cell or gene therapy when it licensed ex-US rights to SRP-9001. 18 months earlier the first reports of micro-dystrophin expression in three subjects given the gene therapy had reportedly caused the Wall Street analysts present to start whooping and punching the air in triumph.

It is safe to say that today the mood is rather more restrained.

Another dystrophy catastrophe for Solid Biosciences