Lilly takes it to Biogen, and the Alzheimer’s events stack up

Lilly's remarkable decision to run a head-to-head trial of donanemab versus Aduhelm spells another big readout for the amyloid targeting space.

The failure of Cortexyme’s atuzaginstat, and Lilly’s ominous proclamations for the tau-targeting space, provide a salient reminder that for now the biggest Alzheimer’s disease action can be found in targeting amyloid beta.

Lilly added another big event to watch in this field yesterday: the start of a head-to-head study pitting its own MAb, donanemab, against Aduhelm. The trial, an aggressively competitive move, will seek to show that donanemab can clear amyloid plaques from the brain faster than the Biogen antibody.

Undertaking studies like this is always a high-stakes game, but there are other reasons why this trial is remarkable. For one, the study's key measure will not be a hard endpoint but will look at a controversial biomarker. Amyloid’s role in Alzheimer’s remains under debate, and the marker is an unproven indicator of disease progression, the FDA's willingness to embrace it notwithstanding.

Trailblazer-Alz 4 will have two co-primaries: amyloid plaque clearance by PET imaging, in the total population and in the intermediate tau subpopulation. As Leerink analysts point out, the study will not be powered for clinical efficacy, but if the belief is that amyloid beta is a valid surrogate endpoint then the degree and speed of plaque removal will matter when comparing agents.

Donanemab does seem to reduce amyloid faster than other a-beta antibodies, including Aduhelm, analysts at Evercore ISI wrote. Cross-trial comparisons point to a win for the Lilly project, and of course Lilly would not have started such a trial if it were not supremely confident of a win.

The ultimate aim of the study is to “bury” Aduhelm, in the words of Bernstein analysts, before that MAb's launch even has a chance of taking off. Biogen is unlikely to have confirmatory phase 3 data on Aduhelm much before the end of this decade. 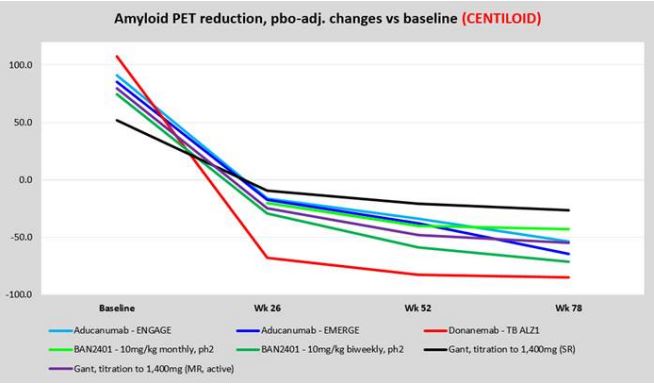 The ongoing pivotal trials of competing amyloid beta MAbs could help validate the amyloid hypothesis. They might also fail, of course, or at least generate further uncertainty. Trailblazer-Alz 4 will read out before these tests, however, and it is important to remember that it is designed for the eyes of payers and physicians, not researchers and regulators.

Lilly will at least be boosting Aduhelm’s profitability by running Trailblazer-Alz 4, as it will have to buy the drug from Biogen, although this will come as small comfort to the beleaguered biotech.

Perhaps Biogen can glean hope from another update yesterday from Lilly, where the company said it would be collecting additional safety data from the ongoing pivotal Trailblazer-Alz 2 study to support donanemab’s accelerated approval application. The move will prompt concerns about an emerging toxicity signal.

Barring such a setback, however, it is remarkable to think that there could be three Alzheimer’s antibodies on the US market by the end of 2022 – four if Roche also decides to go for an accelerated filing with gantenerumab.

All will purport to be disease-modifying. Little wonder that CMS, on announcing a review of Aduhelm’s coverage by Medicare, made it clear that its decision would apply to all amyloid-targeting therapies.

EU steers clear of Aduhelm as a bigger headache threatens