The first oral rescue therapy for acute attacks is on the horizon.

Interim phase II data on Kalvista’s on-demand therapy for hereditary angioedema attacks suggest that KVD900 is an effective means of managing this condition. As an oral kallikrein inhibitor, KVD900 has a major advantage over current therapies in this setting, all of which are subcutaneously injected or intravenous.

And with today’s hit potentially reading through to KVD824, a twice-daily oral plasma kallikrein inhibitor for the prevention of attacks, Kalvista is enjoying a very pleasant view of the future. No wonder its stock is up 170% in early trade.

HAE affects one in 30,000-50,000 people. Patients are prone to rapid and painful swelling attacks, which can become life-threatening when they interfere with the patient’s breathing.

As phase II results go these are pretty good. The the study recruited 53 patients who had had three attacks in the 90 days before enrolment. The first, open-label part saw all patients receive a single 600mg dose of KVD900 to evaluate pharmacokinetics and pharmacodynamics.

Patients then entered the double-blind crossover part, during which they took either 600mg of KVD900 or placebo within an hour of the start of an attack. Later, when experiencing a second attack, each patient was dosed with the alternative treatment.

Only 15% of patients who took Kalvista’s molecule within an hour of an HAE attack needed to take a second, conventional treatment within the subsequent 12 hours. Meanwhile, 30% of placebo patients had to reach for rescue medication in the same time period, a statistically significant difference. 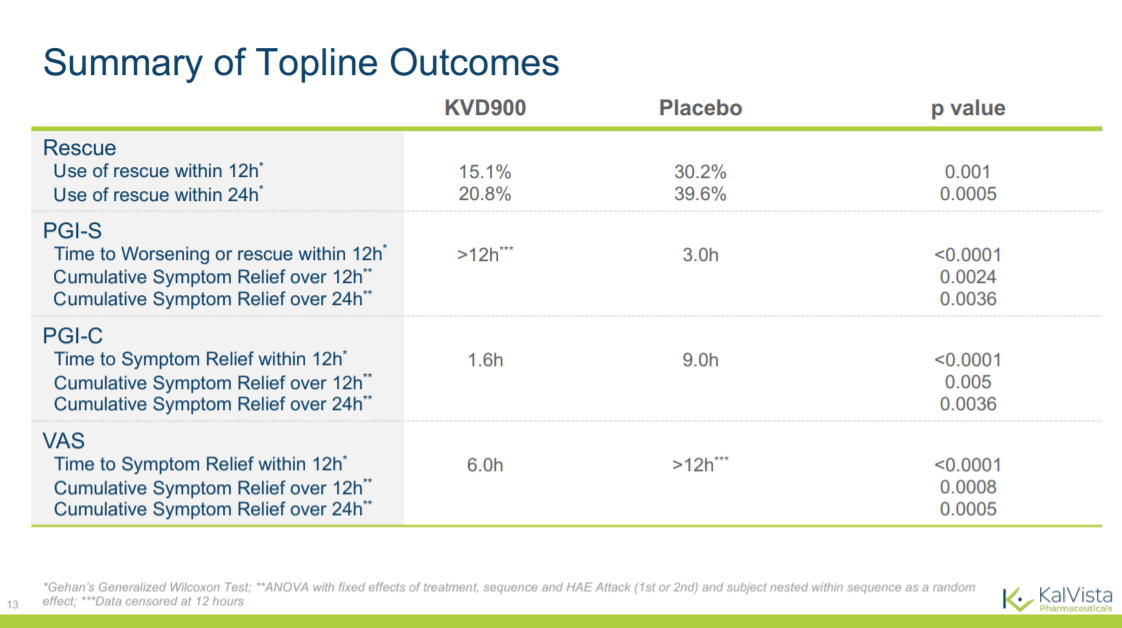 Kalvista called KVD900’s efficacy “comparable to current injectable therapies”, and across three trials of Takeda’s Firazyr, which is the most widely used rescue therapy for HAE attacks and has recently gone generic, rescue medication use was 7-22%.

A comparison with Ruconest, Pharming’s intravenous therapy, can be made on a different endpoint. Time to symptom relief as measured by PGI-C was 1.6 hours for KVD900 and 1.5 hours for Ruconest in its pivotal trial. These figures are little more than illustrative, however, since different time points and definitions were used, and placebo responses varied too.

A phase III trial of KVD900 could start this year. On a call today Kalvista executives said this would probably be roughly the same size as the phase II study, though it would have a more international base. The dose too will likely stay at 600mg given its efficacy and safety – there were no serious adverse events in the phase II trial, and no increased rate of gastrointestinal disorders, a concern in trials of other HAE agents.

Since HAE is so rare, Kalvista does not think it will need a partner for Western markets, being able to cover the ground itself with “just a few sales reps”. A decision on whether to seek Asia licensees will be taken further down the line.

Sellside consensus forecasts for KVD900 sit at $518m in 2026, according to EvaluatePharma. These will surely be raised in the weeks to come.

Analysts from Stifel believe that today’s data also offer validation for KVD824, Kalvista’s pill for preventing HAE attacks, and noted that the project, like KVD900, has shown promising pharmacokinetics and potency.

A phase II trial of KVD824 will start this year. The market leader in the preventive setting is Takeda’s Takhzyro, forecast to do $2bn of sales in 2026, according to EvaluatePharma, and the world will be watching closely to see what Kalvista can accomplish.

Early Morphic data hint at a threat to Entyvio