Mainstay Medical still hopes for US approval of its Reactiv8 device for chronic back pain despite trial failure.

Mainstay Medical is not the first medical device company to be hit by an unexpectedly positive response in a sham control group. It put a brave face on the failure of a trial designed to support US approval of its Reactiv8 neurostimulator for chronic low back pain, but getting the FDA go-ahead now looks like a long shot.

Investors appeared to agree, sending the group’s stock down 37% this morning. The company is pinning its hopes on an apparently improving response to Reactiv8 therapy over time, as well as an unmet need in back pain, but the jury is out on whether this will be enough to convince the agency.

For one, several other spinal cord stimulators (SCSs) are already approved in the US for back pain, including offerings from big hitters like Medtronic, Abbott and Boston Scientific, as well as the Senza system from Nevro.

Reactiv8 works differently from these existing devices, however. It is designed to stimulate the nerves that activate the muscles that stabilise the lower back, while conventional SCSs are designed to mask pain by blocking pain signals before they reach the brain.

In addition, Reactiv8 is intended for patients who have not had back surgery, while traditional SCSs can be used in those with failed back surgery.

This did not stop Mainstay’s chief executive, Jason Hannon, from comparing the Reactiv8 response rates to those seen with the older devices. The data appear to show similar efficacy, with both Reactiv8 and traditional SCSs coming off worse than Nevro’s Senza system – also known as HF10 because it uses high-frequency, 10kHz stimulation. 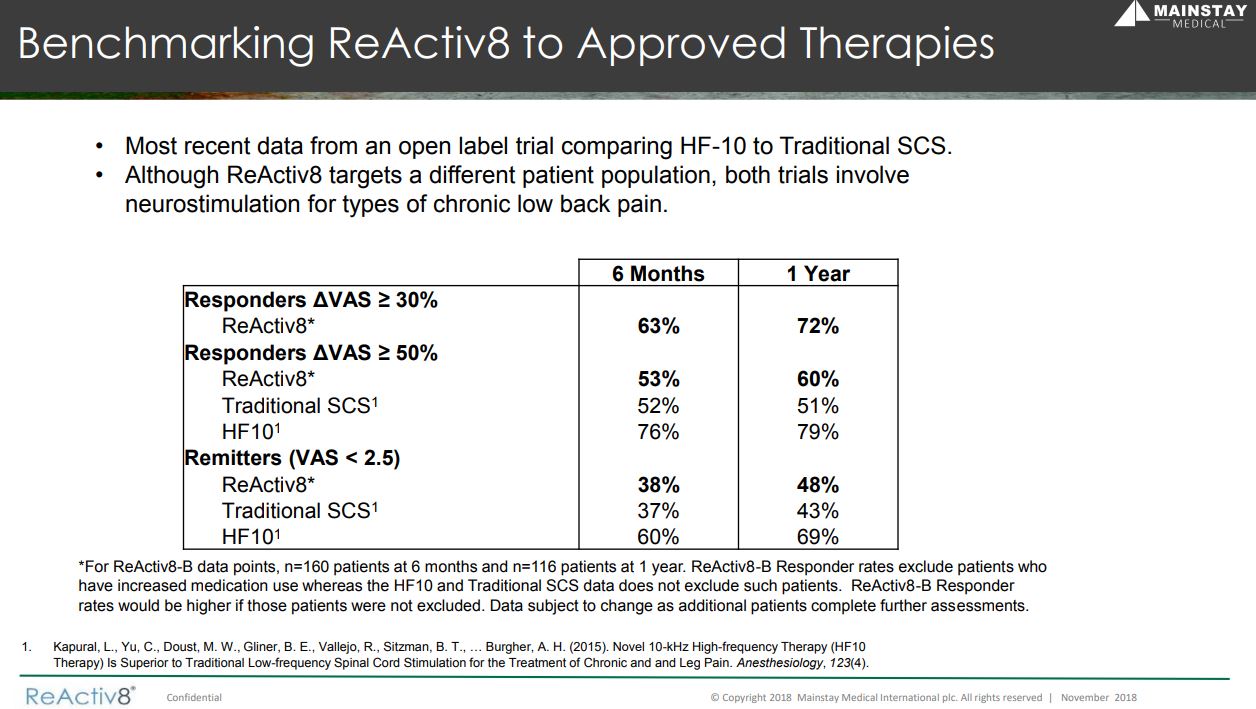 Mr Hannon noted that the analysis above excluded Reactiv8-treated patients who increased their use of other pain medications. If these had been included responder rates with Reactiv8 would have been higher. These patients were not excluded from the analyses of the other products, he added.

Perhaps Mainstay’s mistake was to include a sham arm in the 204-patient Reactiv8-B study; no other implantable devices for low back pain have undergone such a rigorous trial, according to Mr Hannon.

In Reactiv8-B, patients in the control arm underwent an implantation procedure and believed that they were self-administering therapy twice a day. The primary endpoint of the study was a response to therapy at 120 days; responders were classified as patients with a 30% or greater improvement in pain, using a visual analogue scale, without any increase in pain medication.

The company pointed to responder rates at six months and one year, which showed Reactiv8 performing better. However, as patients in the control arm crossed over to active therapy at 120 days, this portion of the study was not placebo-controlled, so it is difficult to ascertain the real benefit with Reactiv8. 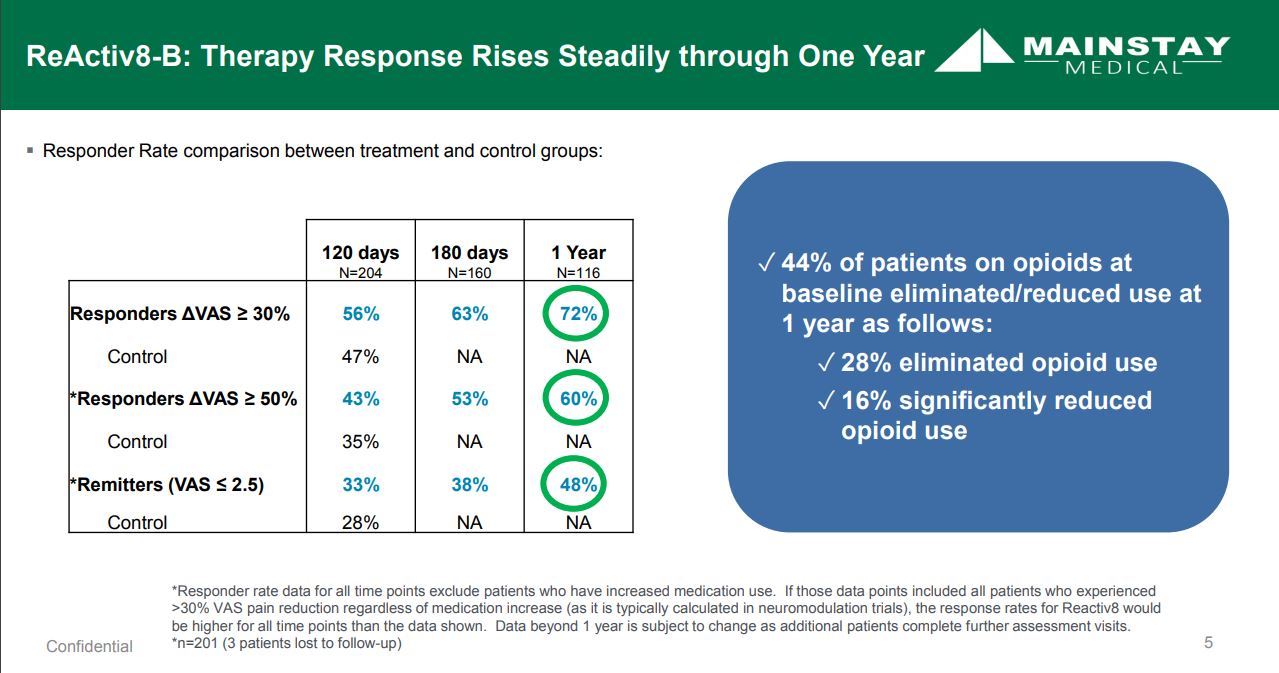 The device is already CE marked in Europe but is not a huge seller: Mainstay reported total revenues of $0.4m in the first half of 2018.

US approval is the real prize, so it is perhaps no wonder that the company refuses to give up: its next step is a pre-PMA meeting with the FDA. Mr Hannon said the regulatory timeline would be longer than previously estimated, but that he was still confident that the “totality of the data” would be enough for approval.

Carmat’s heart sinks with another delay