Despite missing pretty much all the endpoints of a registrational study, the Danish company insists that it has a chance of approval for a treatment for an incurable neurodegenerative disease.

Only very faint glimmers of hope need to be offered to patients with intractable and deadly diseases to warrant approval of experimental treatments, and it is on this basis that Orphazyme intends to head to regulators later this year with arimoclomol.

Full results of a 50-patient phase III trial in patients with Niemann-Pick disease type C (NPC) unveiled today confirm a miss on the primary endpoints, but the company insists that the "totality of the data" support the product’s utility. Signs of disease stabilisation seem to be evident, and Orphazyme claims that biomarker data are supportive, but convincing the regulators will not be easy.

NPC is a rare inherited condition, normally diagnosed in childhood, that causes progressive neurodegeneration and death, typically within 20 years. It is a lysosomal storage disorder caused by misfolded NPC protein; arimoclomol is thought to work by stimulating heat-shock proteins that can help re-fold aberrant proteins and get them to the correct location.

“Our fundamental hypothesis is that we will be able to treat the pathology in the cell just by getting enough proteins to the right place,” Anders Hinsby, Orphazyme’s chief executive, told Vantage. “This involves transporting the NPC protein to the lysosome, and we would expect to see cholesterol flux under better control [if this happens].”

Mr Hinsby says this is exactly what they did see: biomarker data presented today showed that treated patients had reduced accumulation of cholesterol in skin and blood.

Data supporting the mechanism of action will presumably help Orphazyme’s case. However, it is on efficacy that red flags are raised. The trial had two co-primary endpoints that tracked disease progression in different ways: the 5-Domain NPC-CSS is a disease specific outcome measure, assessing aspects including speech and fine motor skills, while the CGI-I is a patient rating tool used widely in the psychiatric field. The latter was included at the request of the FDA, and has never been used in an NPC trial before.

On the first measure, patients in the arimoclol group displayed a 74% reduction in disease progression over placebo, though this missed statistical significant with a p value of 0.0506. Two prespecified subgroups did show stronger results: removing patients under the age of four improved the p value to 0.0219, while patients also receiving Zavesca, the only drug to be approved in this indication, generated a p value of 0.0071. This subgroup analysis was requested by the EMA.

Orphazyme argues that the linear charts below show more clearly how disease progression is stabilising in arimoclomol patients, and hopes that this will help convince regulators. 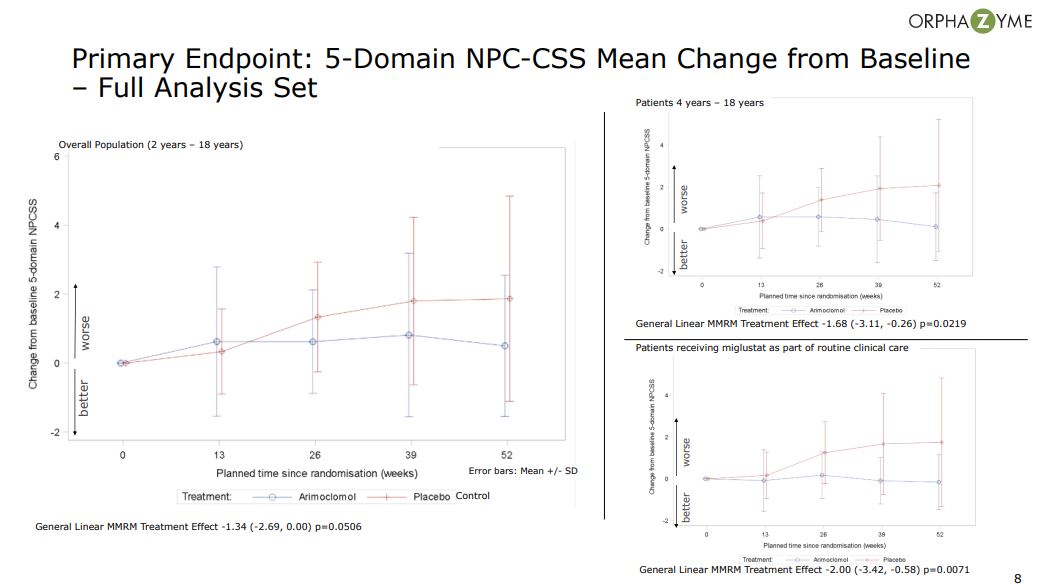 Unfortunately for Orphazyme, the CGI-I endpoint also missed, owing to an unexpectedly strong placebo response. Again, the company attempted to find supportive evidence, and argued that, of the patients who progressed most severely in the trial, most were found in the placebo group.

The regulators may or may not follow this logic, but the fact that four secondary endpoints also failed to hit significance means that Orphazyme will have to make a very convincing case.

Going in the company’s favour is a tolerability profile that looks acceptable for such a devastating disease, and a lack of other options. Perhaps most important, however, is a permissive regulatory climate, in the US at least, that continues to embolden drug developers to try their luck with far from convincing evidence.

“Considering how [regulators] have historically evaluated products for rare diseases the size of Niemann-Pick disease, and the fact that they appreciate the totality of the data pointing in the right direction ... we believe that our package is very robust,” Mr Hinsby said.

He acknowledged that conversations still need to be had with regulators, saying that they hope to file by mid-year. These reassurances were enough for some: shares in the company jumped almost 40% today, though the stock remains some way below last September, when Orphazyme first confirmed the miss on the primary endpoint.

A bet on a green light here requires confidence in the FDA maintaining its open-minded approach to rare diseases, a measure on which the regulator has precedent.

Time for Nektar to Pivot