Pegasus flies for Apellis, up to a point

The study marks victory against Soliris, but Apellis could still find the market hard to crack.

Running head-to-head studies exposes the risk of answering a question you really do not want answered, but sometimes it pays off, as Apellis found out yesterday. In the Pegasus trial in paroxysmal nocturnal haemoglobinuria, Apellis’s APL-2 beat Alexion’s Soliris, prompting an initial 60% share price surge.

The subsequent pullback – the stock closed up 29% even before the all-too-predictable equity offering was announced – reveals doubts about APL-2’s place in the market, however. This space is highly competitive, and with Alexion and others bulking up through acquisitions Soliris might ultimately not be the drug APL-2 has to beat.

The most obvious threat is Alexion’s own Soliris follow-on, Ultomiris; both are approved for PNH. Then there are the subcutaneously delivered zilucoplan, acquired through UCB’s $2bn takeout of Ra, and Achillion’s ACH-4471 and ACH-5228 (the latter is oral), which as of last October are in Alexion’s hands.

None of this should detract from Apellis’s immediate success, which looks all the more impressive given Pegasus’s somewhat complicated design; the 80 anaemic PNH subjects first got three months’ Soliris maintenance, then a Soliris plus APL-2 combo as a one-month run-in, before being split into the two head-to-head monotherapy cohorts.

Despite this, the primary endpoint, improvement in haemoglobin levels, was comfortably met: starting from a baseline of 8.7g/dl, subjects on APL-2 saw an average increase of 2.4g/dl after 16 weeks, while those on Soliris had a 1.5g/dl decline, the resulting difference being statistically significant (p<0.0001). 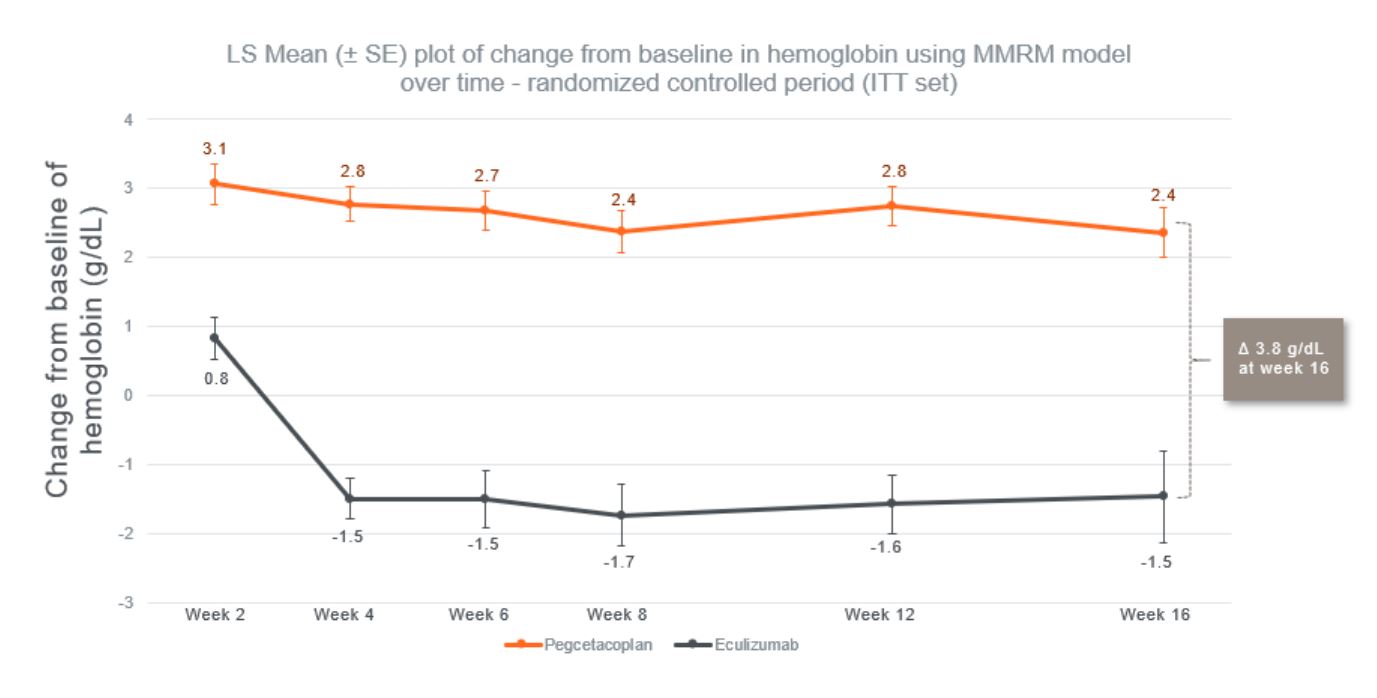 APL-2, now carrying the generic name pegcetacoplan, inhibits complement C3, which lies upstream of C5, the target for Soliris and Ultomiris. The rationale behind its development lies in the fact that up to 70% of PNH patients continue to experience low haemoglobin levels despite treatment with C5 inhibitors.

However, despite the resounding primary endpoint win, Apellis appeared cautious on an analyst call yesterday, saying it needed to talk to regulators before determining the next steps.

There are two obvious reasons for such caution. Firstly, APL-2’s side effects could be troubling; 37% of APL-2 subjects had injection site reactions and 22% had diarrhoea, versus 2.6% and 0% respectively for Soliris. Though APL-2 did result in less haemolysis than Soliris, discontinuation with the Apellis project was higher.

And, secondly, APL-2’s performance on secondary measures was somewhat patchy. For instance, APL-2 failed to hit non-inferiority versus Soliris in normalising lactate dehydrogenase levels, a marker for reduced haemolysis in PNH, though this might be down to patient censoring in the Soliris cohort.

Importantly, however, Ultomiris does boast non-inferiority to Soliris on this measure, and comes with a dosing advantage – every eight weeks in the maintenance phase versus Soliris’s every two weeks. In Pegasus APL-2 was dosed every three days.

If the data are good enough for a US filing APL-2’s potential will hinge on Apellis’s ability to break into this highly competitive market, as well as on label expansions. For now sellside forecasts are low-key: EvaluatePharma sees 2024 consensus for revenues of $136m, versus $3.3bn and $2.4bn for Soliris and Ultomiris respectively.

Apellis investors will point to the fact that this is an area ripe for deal making, as Alexion’s tie-ups with Achillion, Syntimmune and Affibody, and UCB’s takeout of Ra, demonstrate. If the Pegasus data put Apellis in the acquisition frame then the company might not have to worry about selling APL-2, and a cash injection will only strengthen its hand in negotiations.

Ash 2022 preview – Novartis has Apellis in its sights

After 33 years Geron could have an approved drug