Grifols has announced intriguing results in a subgroup of patients in a large Alzheimer's disease study, Ambar, but the finding could also benefit other suppliers of blood products.

A hit in a subgroup would not normally be something to get too excited about. But in this case the clinical trial in question is in Alzheimer’s disease, and Grifols’ shares jumped almost 10% today on success in patients treated with plasmapheresis and human albumin.

This almost mechanical approach stands out in a field dominated by experimental antibodies, but it seems to have generated some intriguing results. The extent to which Grifols might ultimately benefit is questionable, however, as there are plenty of others able to capitalise on the finding.

Plasmapheresis, a process that filters the blood to remove harmful antibodies, is approved, reimbursed and widely used. For the study, Grifols used Albutein, its in-house formulation of albumin, a protein abundant in human blood, though various other forms are available. Thus there is little preventing doctors from obtaining the protein from other sources and using it to treat patients, should this technique prove its use.

Grifols has only released piecemeal information so far, so the real relevance of this finding will be hard to gauge until the full results are published.

A pooled analysis of all patients and all treatment arms hit one of the primary endpoints, showing a significantly slower rate of decline from baseline, compared with placebo, on the ADCS-ADL scale. The co-primary endpoint, the ADAS-Cog scale, was not hit. 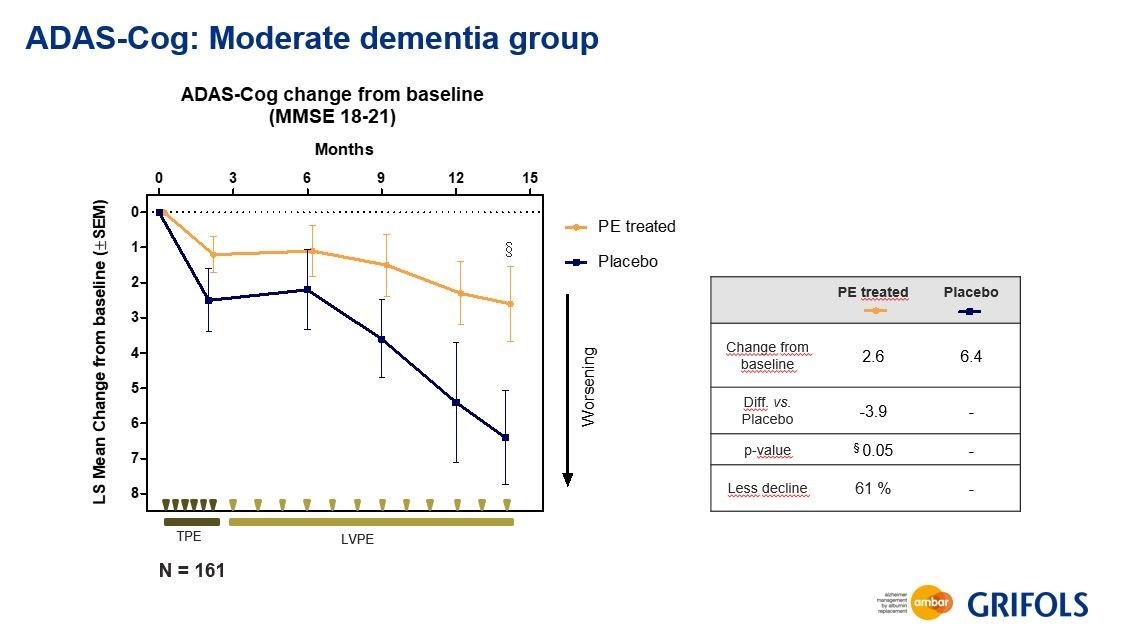 Data from the moderate patients in the Ambar trial

Splitting this by disease severity, however, showed more encouraging results. Among patients with moderate Alzheimer’s, Grifols’ therapy allowed a significantly slower rate of decline compared with placebo on both scales. According to Berenberg analysts, significance versus placebo was achieved in each individual dose group, though the figures themselves were not given.

The treatment showed no benefit over placebo among mild patients, but since the endpoint cut-off was only 14 months, this may have been because they did not decline quickly enough for a benefit to become apparent.

The idea behind the therapy is that albumin binds to beta-amyloid protein circulating in the blood; it is then flushed out with plasmapheresis, leaving less to accumulate in patients’ brains and form plaques. Grifols is hedging its bets, however, knowing the pressure the amyloid hypothesis has come under in recent years, and suggests that albumin might also bind to other Alzheimer’s-related proteins, or have antioxidant, immune modulatory and anti-inflammatory properties.

Whatever the mechanism the results seem to speak for themselves, although a fuller look at the efficacy data, as well as information on safety and patient drop outs, remain crucial to really assess the potential here.

Albutein is already approved as a blood substitute for treating patients with nephrosis and various types of anaemia, among other uses, and should Grifols achieve a label claim for Alzheimer’s, sales would be given a boost.

But there is no reason why sales of other forms of albumin will not take off too, meaning that companies such as CSL and Shire – soon to be Takeda – stand to benefit as much as Grifols.

So it might not just be Grifols that conducts further Alzheimer’s trials. The Spanish group has not announced any concrete plans, but any further research will likely focus on moderately ill patients, and investigate the most effective dose levels and plasma exchange frequency.

Berenberg analysts do not believe further trials or regulatory approval for Alzheimer’s will be necessary to drive use in the disease, and write that the Ambar data alone might be enough to drive substantially higher demand for albumin in the longer term. A closer look at these data will be needed first.

Shire scores another rare disease win but will CSL get there first?