As Meiragtx wows investors with its gene therapy for a cause of blindness, continuing lack of clarity around Gensight’s GS010 prompts more questions than answers.

For Meira the share price rise was driven by a clinical win in its 15-patient, phase I/II dose-finding trial of AAV-RPE65, in children and young adults with debilitating variants in the RPE65 gene. RPE65-deficiency causes impaired vision from birth due to the degeneration of the retina. Most RPE65-deficient patients experience poor vision in low-light conditions from a young age, followed by central vision loss, which progresses to complete blindness by early adulthood.

As part of the six month study patients were treated with AAV-RPE65 in the eye that had the most damage, the other eye served as an untreated control. Adult subjects were treated with one of three different dosing regimens, though Meiragtx has yet to breakout the actual results from the study, which also included a paediatric expansion cohort. The company has only said that there were statistically significant improvements in functional vision at six months versus baseline along a range of measures including: time to navigate a maze in varying light levels, retinal sensitivity, visual acuity and contrast sensitivity.

Two eyes better than one?

Conversely, after 96 weeks of testing GS010 all Gensight can definitively say about its gene therapy is that it is safe. The project has been designed to treat a different cause of blindness, Leber’s hereditary optic neuropathy (LHON).

In April 2018, at the 48 week readout of the Reverse trial, patients treated with GS010 showed improvements in best-corrected visual acuity (BCVA) in both their treated and untreated eyes. Almost a year on at the final read out of the study, Gensight is still struggling to explain this, especially as the improvements have continued. The magnitude of improvement in untreated eyes was lower than treated eyes, but the difference between the two was not clinically significant, meaning the trial was a bust. 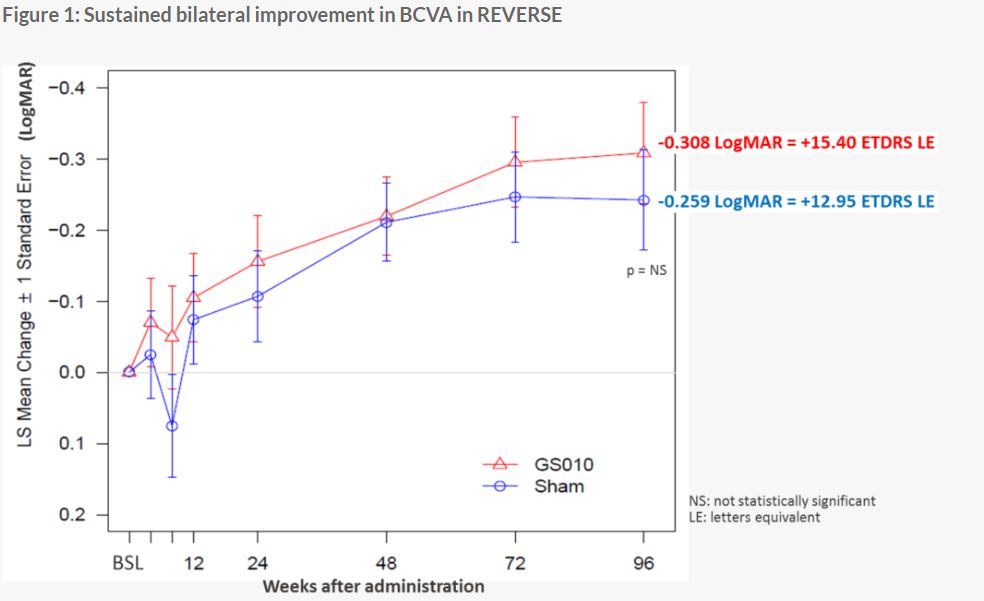 A similar pattern was repeated on measures of contrast sensitivity. Ocular use of gene therapy has historically been seen as one of the safest applications of the technology because the eye is a closed system, meaning there should be no off-target effects.

KOL’s have also been puzzled with the results from the Reverse trial with one saying: “a definitive explanation for the bilateral effect is still lacking”.

Gensight today raised the possibility that this conceived wisdom might be wrong, asking investors to be “open to the idea that gene therapy delivered into one eye may be able to access the contralateral eye”.

Some investors appeared to buy this unconventional explanation as Gensight shares rose 3%. But in a KO

Gensight chief executive Bernard Gilly ruled out the possibility of additional European trials and said the group would be pressing on with a December European filing date. But the company will presumably be asked to explain the the continued improvement seen in both eyes.

Additionally, by only treating one eye both groups have gone against FDA recommendations of dosing both eyes when using gene therapy. Admittedly, the recommendation was issued after Gensight had started its Reverse

Meiragtx is much further away from setting out any US filing plans, but at least with J&J on board the group is in a better position to navigate the a US regulatory path.

This is an updated version of the original

Chemocentryx takes a leap of faith with avacopan

Encouraging progress, but Applied Genetics still has questions to answer