TG adds a multiple sclerosis string to its bow

Hot on the heels of a successful Ash meeting, TG Therapeutics shows that it might have a multiple sclerosis challenger to Ocrevus.

One company set to have a very happy Christmas is TG Therapeutics. After enjoying a 13% rise on the back of haematology data at last weekend’s Ash meeting, its stock put on another 41% yesterday when two pivotal studies backed the use of its CD20 antibody ublituximab in multiple sclerosis.

True, the data put ublituximab on a collision course with Roche’s juggernaut Ocrevus, which derives much of its fame from activity in primary progressive MS, in which ublituximab has yet to be tested. But TG’s data should not be underestimated for the achievement they mark in the more competitive relapsing form of the disease.

Clearly, this is enough for ublituximab to be filed in MS, which TG said it would do in mid-2021. The project is separately awaiting approval for lymphoma, and a rolling filing as a combination with TG’s PI3K inhibitor umbralisib in chronic lymphoblastic leukaemia is due to be completed next year.

Sellside consensus, as compiled by EvaluatePharma, sees the combo generating risk-adjusted 2026 sales of $1.3bn. Ublituximab monotherapy, meanwhile, carries a figure of $682m, of which just $239m is derived from MS.

If this is down to relatively few analysts putting the MS opportunity in their models the situation will surely change after the Ultimate 1 and 2 data. In the two pivotal trials ublituximab’s relative relapse rate reduction versus Aubagio was 50-60%.

True, Aubagio is hardly the most efficacious MS therapy, and the real-world competition includes Biogen’s Tecfidera (an oral drug, so in a separate competitive space) and Novartis’s Kesimpta (the MS version of the anti-CD20 drug sold for oncology use as Arzerra), in addition to Ocrevus.

But, as Evercore points out, on a cross-trial basis ublituximab looks competitive. Ocrevus’s and Kesimpta’s annual relapse rates in phase III came in at 0.16 and around 0.11 respectively, and the analysts guess that, when the full Ultimate results are published next year, they will show a figure close to 0.09 for the TG asset.

They also point out that ublituximab is dosed less frequently than Kesimpta, and with a shorter infusion time than Ocrevus. Last year Ocrevus sold $4.8bn.

TG’s journey in neurology has thus gone rather more smoothly than in oncology. The group’s strategy was initially dismissed as comprising a me-too CD20 MAb and an anti-PI3K, a drug class fraught with toxicity problems.

But it struck a blow in May, when the Unity-CLL trial of the combo read out positively versus Gazyva plus chlorambucil for progression-free survival, after initially failing to be stopped for a remission rate benefit (TG pulls victory from the jaws of defeat, May 6, 2020). TG completed its rout at Ash, where the full Unity-CLL data revealed an advantage not only for PFS but for ORR too.

Still to be ironed out are details like what the combo’s potential is in front-line CLL, comprising around half the Unity-CLL population, and how it will fare in the real world against drugs like Abbvie/Roche’s Venclexta.

Presumably the FDA will not grant the combo approval until one of its constituents already has a green light. But the timeline makes sense: ublituximab monotherapy has a US Pdufa date of February 15 for marginal zone lymphoma and June 15 for follicular lymphoma – notably before submission of the CLL filing is finalised.

For now TG can be satisfied in showing ublituximab’s combo potential while mitigating toxicity; multiple sclerosis is the icing on the cake. 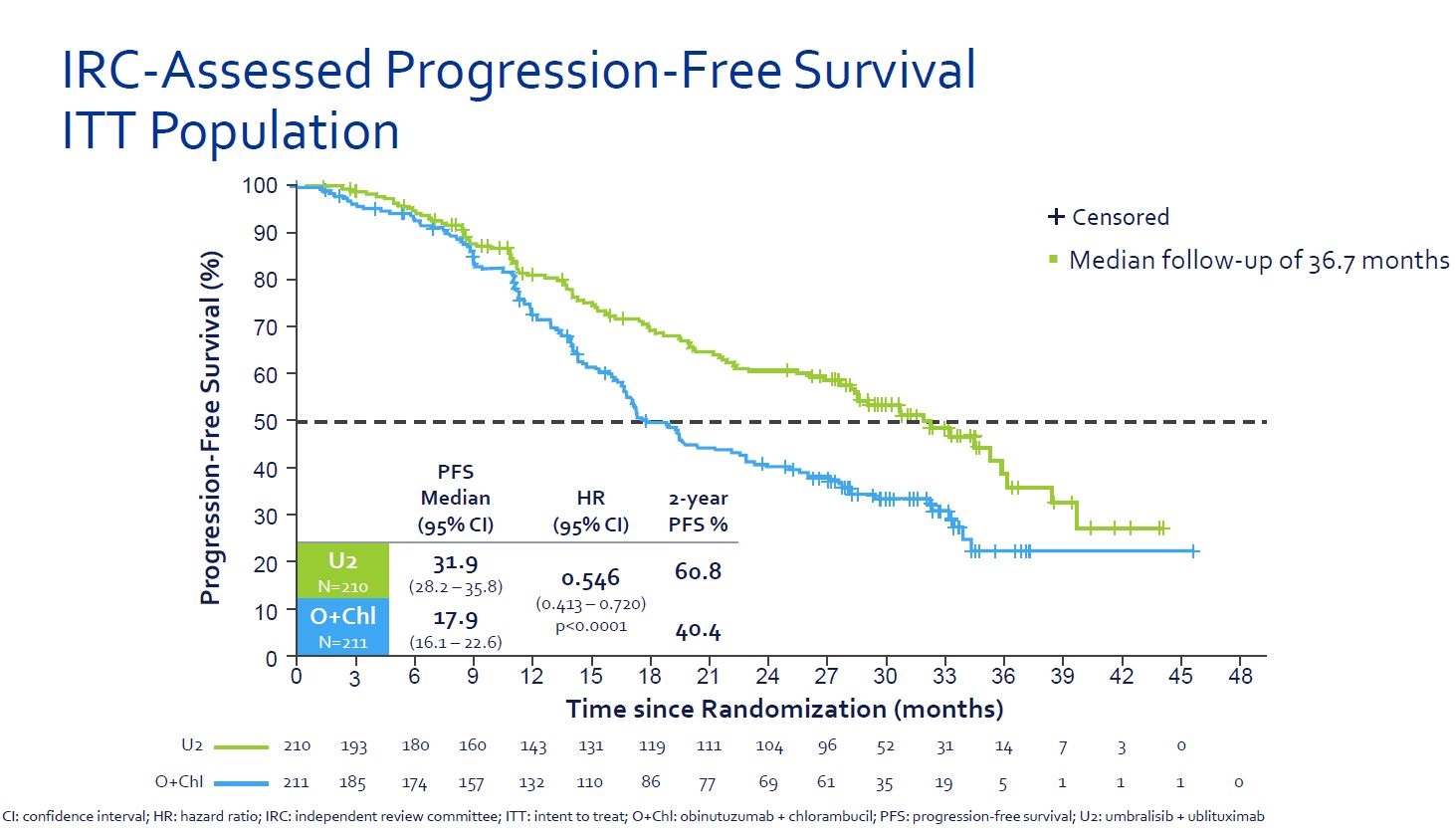