Uniqure turns the screw on Spark and Pfizer

In the race to develop a haemophilia B gene therapy Uniqure now has the upper hand.

After a disastrous day for gene therapy yesterday, Uniqure is flying the flag for the sector with its haemophilia B gene therapy candidate AMT-061. The group’s stock got a 7% boost today on further positive data from a three-subject phase IIb trial of the project.

Perhaps more importantly, AMT-061 has now leapfrogged its closest rival, Pfizer and Spark Therapeutics’ fidanacogene elaparvovec. Uniqure treated the first patient in its pivotal Hope-B trial earlier this week, while Pfizer has only started the lead-in portion of its phase III study.

Uniqure’s chief executive, Matt Kapusta, said on a conference call today that as well as potentially reaching the market first, AMT-061 could also be best in class. The data released so far – with the caveat that only a handful of patients have been treated with AMT-061 – appear to support this.

Previously, the phase IIb trial found that, at six weeks, patients receiving the gene therapy had mean factor IX activity of 31% of normal (Haemophilia B race heats up with Uniqure data, 15 November 2018).

Longer-term data presented today at the EAHAD meeting in Prague improved on this, with mean FIX activity increasing to 38% of normal at 12 weeks. Patients’ FIX activity at the most recent time point ranged from 25% to 51%. This is a clinically relevant improvement; indeed, no patients experienced bleeds or needed FIX therapy. And levels for two of the three patients were within or close to the normal range. 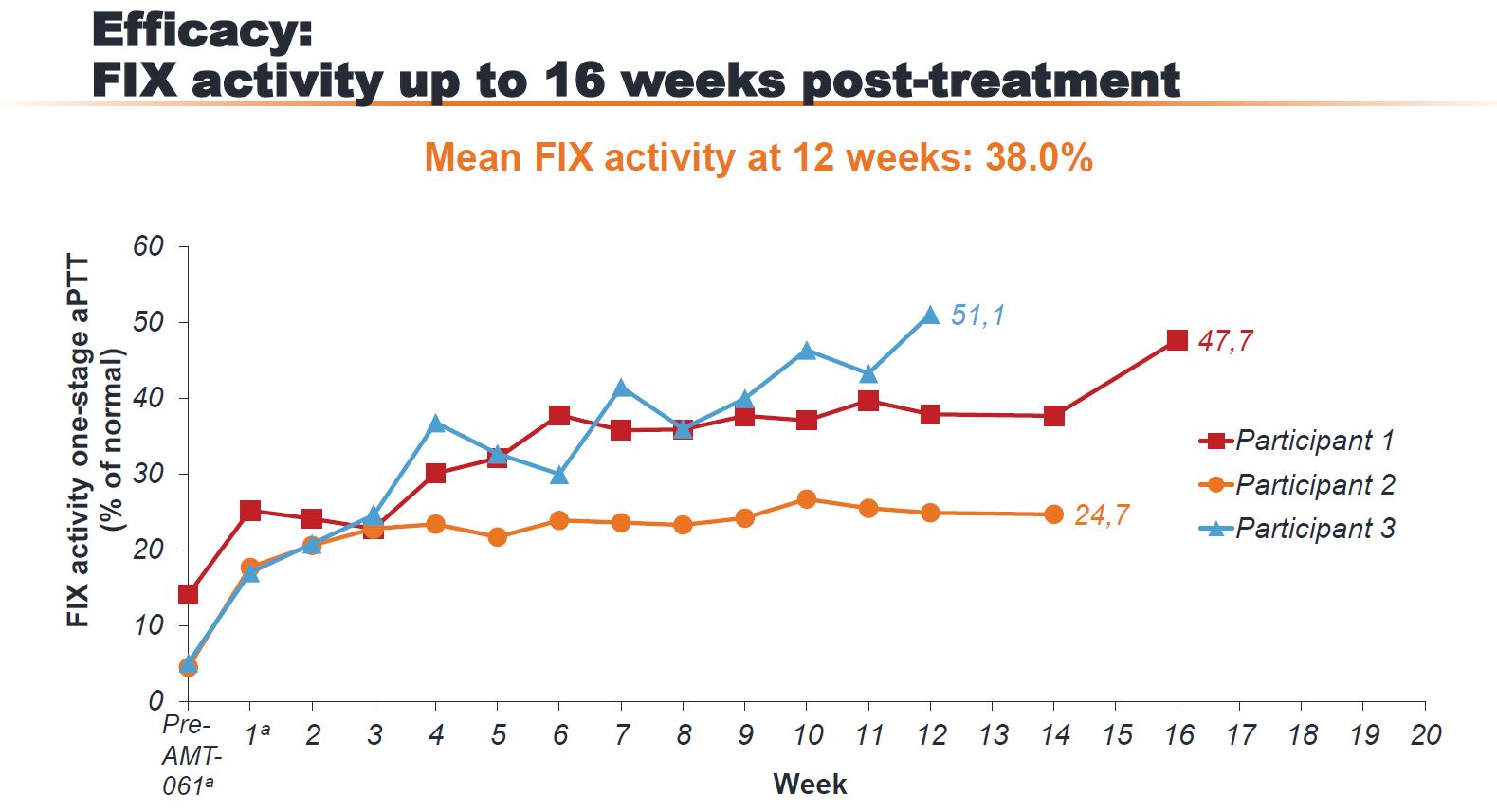 This appears to put AMT-061 on a similar footing to fidanacogene elaparvovec in terms of efficacy: three patients receiving an “enhanced” version of the Spark/Pfizer project have shown FIX activity of 38-55% at 12 weeks (WFH 2018 – Spark keeps its haemophilia B gene therapy edge, for now, May 22, 2018).

AMT-061 could have other advantages. Fidanacogene elaparvovec has been linked with elevated liver enzymes that have required treatment with steroids – something not seen in the phase IIb trial of AMT-061.

And AMT-061 might have utility in patients with pre-existing neutralising antibodies, a group that has been excluded from trials of fidanacogene elaparvovec. Indeed, two of the three patients in Uniqure’s phase IIb trial had not been allowed to participate in other haemophilia B gene therapy studies, according to Dr Annette von Drygalski of the University of California San Diego, who presented the AMT-061 data today.

The data could reassure gene therapy investors, many of whom got burned yesterday on setbacks for Solid Biosciences in Duchenne muscular dystrophy and Sangamo in mucopolysaccharidosis type II.

For Uniqure there is still the question of intellectual property: both AMT-061 and fidanacogene elaparvovec use the Padua FIX variant. Spark had originally been working with this variant, but Uniqure switched when it became apparent that its older project, AMT-060, based on a wild-type FIX variant, was not efficacious enough.

Uniqure claimed in 2017 that it had acquired patents covering the Padua variant, despite the fact that Spark had been working on its project before this. Meanwhile, Spark previously told Vantage that the IP situation was “somewhat confused”.

Perhaps these issues will be ironed out if and when these projects get to market. For now, Uniqure looks like it has a good shot at being first.