Evaluate Vantage over the late May bank holiday

Evaluate Vantage will not publish on Monday May 31 owing to a public holiday in the UK. We will return on June 1, 2021.

Secretive Lyell pulls back the curtain

The highly secretive biotech Lyell Immunopharma had already raised $493m in the second-biggest private financing of 2020, and yesterday brought news of its plan to float. Lyell hopes to raise at least $150m in the IPO, whose post-money valuation has yet to be set. The group’s pipeline is wholly preclinical, and no IND will even be filed until next year – a fact that might ordinarily restrain enthusiasm. But Lyell is backed by the former chief executive of Juno, Hans Bishop, whose other preclinical biotech, Sana, floated at a valuation of about $4bn. So secretive is Lyell that it was only recently revealed who else was behind the company, and its SEC filing spells out that it appears to be the brainchild of Drs Stan Riddell, formerly of Juno, and Crystal Mackall, ex-NCI – both highly prominent Car-T pioneers. Another Juno/NCI veteran, Rick Klausner, was until recently chief executive, for which he was paid $38.9m in 2020, but last August Liz Homans, formerly of Roche, took over that role. The filing also reveals Lyell’s pipeline to be a mix of Car-T, engineered TCR and TIL approaches, which scientifically tend not to make happy bedfellows.

With Vectura’s sale to the private equity company Carlyle Group for £958m ($1.4bn), UK investors have another reason to be down on biotech. Vectura, like Cenes and Vernalis before it, is the result of numerous UK biotech mergers that failed to amount to much. During its 24-year existence Vectura subsumed Innovata, Activaero and Skyepharma for a combined £680m, but shortly after building this respiratory disease focus it gave up on drug development to become a service company. Its sale price amounts to a 142% premium to its 2004 IPO. Cenes and Vernalis were sold for a pittance to Paion and Ligand respectively, and UK biotech’s shining star is probably GW Pharmaceuticals, which had to seek fame and fortune in the US. The UK still produces cutting-edge science, but the likes of Autolus, Achilles and Nightstar all chose Nasdaq to float. The UK sector is left with a rump of micro caps, and even the once mighty Oxford Biomedica is now largely a services business. Though Vectura has started generating contract revenue its top line is driven by Flutiform, Enerzair Breezhaler and an Advair generic, and a private equity group would typically now cut costs and take on debt.

Europe’s regulator looks tougher than its US counterpart, again

Restricting Keytruda’s front-line oesophageal cancer label to ≥10% PD-L1 expressers, as the EU is proposing to do, makes perfect sense given the available data. This would put the regulator, whose CHMP recommendation was revealed yesterday, at odds with the US FDA, which in March approved Merck & Co’s drug in this cancer in all-comers. At issue is the supporting study, Keynote-590, in first-line oesophageal/gastroesophageal junction carcinoma (Esmo 2020 – double win complicates the gastric cancer picture, September 21, 2020). This showed a survival benefit in ≥10% PD-L1 expressers and in all-comers. But subgroup data presented at Esmo suggested that an exceptionally strong result in PD-L1 expressers drove the all-comers result: in subjects expressing PD-L1 at below 10% the confidence interval’s upper bound for overall survival was above 1.00, meaning that some patients might have been better off on chemo alone. While it is possible that many 1-10% PD-L1 expressers did derive a benefit, the CHMP is – not for the first time – proposing a tougher line than the FDA. And for doctors the gastroesophageal cancer space is further complicated by the recent US approval of Keytruda plus Herceptin in Her2-positive patients, and by that of adjuvant Opdivo. 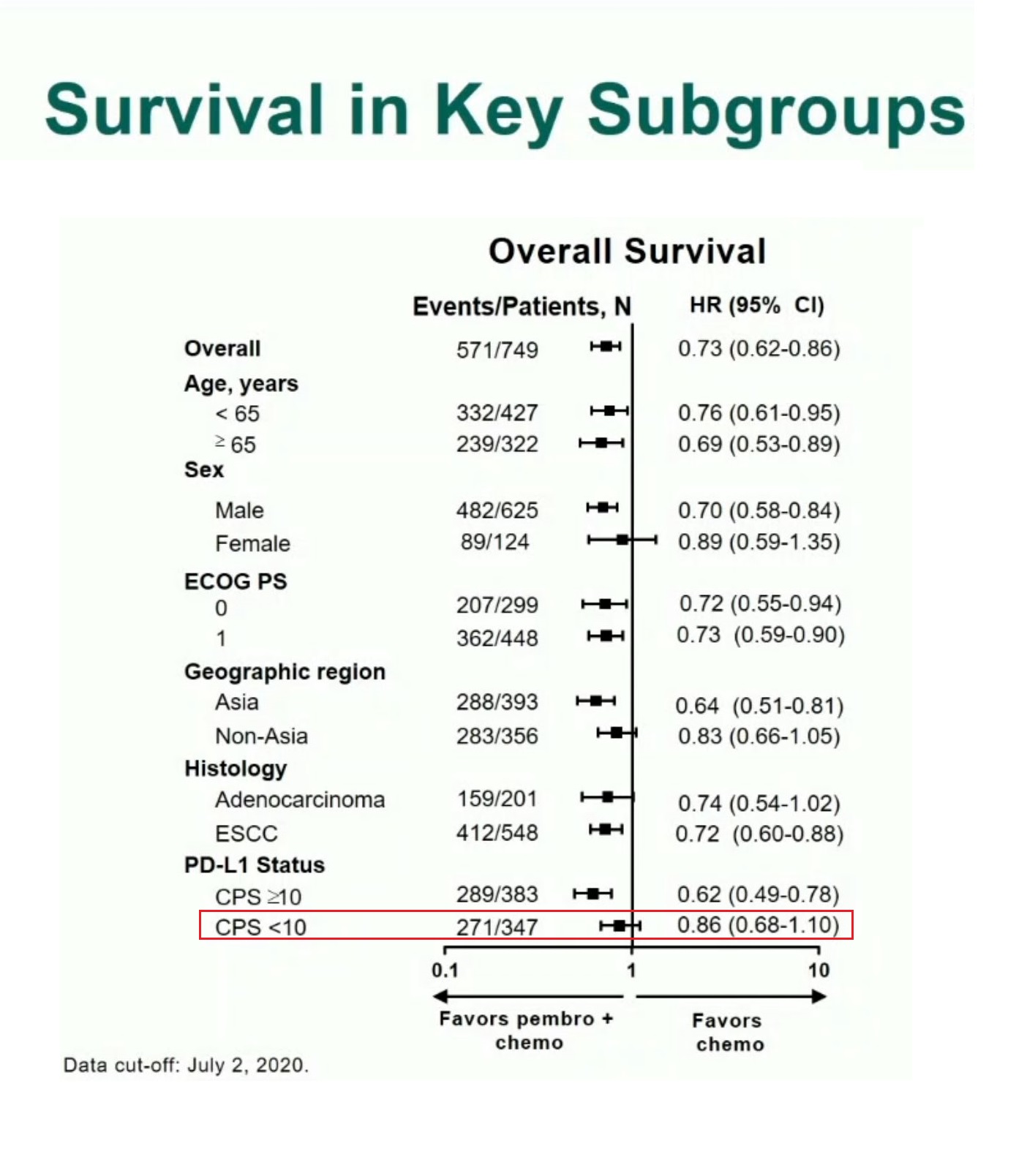 The latest cut of a prostate cancer cohort from Exelixis’s Cosmic-021 trial of Cabometyx plus Tecentriq show a deteriorating dataset, but this is just one of the group’s problems. The second is the upcoming results of Novartis’s Vision study of 177Lu-PSMA-617 in a similar setting; Vision data are under wraps until next month’s Asco meeting, but their selection as a late-breaker hints at a good result. A strong Vision readout would undermine Exelixis’s case for accelerated Cabometyx approval based on Cosmic-021 – even before considering the latter dataset’s deterioration. Exelixis plans a filing in high-risk mCRPC patients progressed on Zytiga or Extandi, but yesterday said an independent review of Cosmic-021 showed overall remission rate of just 18%, which Stifel reckons is not far off what PD-(L)1 blockade alone can do. At Asco-GU in February 2020 Exelixis had boasted a 33% response rate – in a smaller dataset and according to more lenient, investigator review. True, Novartis’s Vision trial gives 177Lu-PSMA-617 on top of Zytiga/Xtandi, but this technical difference will unlikely amount to much if Vision establishes ’617 as a new late-line standard. Evaluate Pharma sellside consensus sees Cabometyx generating $106m of 2026 revenues in prostate cancer, versus $552m for ’617.

Swift approval for amivantamab, now trademarked Rybrevant, gives J&J first crack at non-small cell lung cancer driven by exon 20 insertions, a hard-to-treat subset. The accelerated approval comes two months before the FDA’s goal, and was based on data presented at World Lung earlier this year that included a 40% response rate. Developers have previously struggled to hit this mutation effectively with small molecules; Rybrevant is notable for being a bispecific against EGFR and Met. Rybrevant’s infused administration could become a hindrance, a theory that might be tested should Takeda’s small molecule mobocertinib win approval by its October 26 Pdufa date. Mobocertinib data at World Lung were arguably less impressive than Rybrevant’s, although the evidence for both is likely to evolve. Spectrum seems to have restricted its work with poziotinib to Her2 exon 20 mutations, which would not make it a direct competitor. Otherwise the pipeline includes a couple of projects in development in China, and BDTX-189 from Black Diamond, which underwhelmed last week with data due to be presented at Asco next month. Cullinan is also presenting an update, on CLN-081, at the conference.

Despite NGM Bio’s trial of aldafermin in Nash hitting some secondary endpoints the company has decided not to push on with the programme, saying it will not be ploughing cash into another study. The phase 2b Alpine 2/3 study, in patients with stage 2/3 fibrosis, failed to meet the primary endpoint, fibrosis improvement by at least one stage with no worsening of Nash, with aldafermin versus placebo. The company's shares plummeted 40% in early trading. Alpine 4, in patients with very advanced fibrosis and compensated cirrhosis, will continue, and NGM has an option to jump on board with MK-3655, an insulin sensitiser out-licensed to Merck & Co; effectively, however, one of the investment community's most closely-followed Nash plays looks to have thrown in the towel in this disease. Several other companies are looking at fibroblast growth factors, but the news is another reminder that Nash is an incredibly tough target, despite a huge amount of hope, and hype, in the past few years. NGM's attention will now turn to its remaining pipeline, which includes NGM621 in phase 2 in geographic atrophy. The project is an anti-complement C3 antibody, much like Apellis’s intravitreal pegcetacoplan, which is due to report phase 3 data in the third quarter.

Lilly will submit its dual GIP/GLP-1 agonist tirzepatide to regulators by the end of 2021 after the project scored today in its fifth pivotal trial, Surpass-4. The study, in type 2 diabetes patients with increased cardiovascular risk, found tirzepatide was superior to insulin glargine on HbA1c and weight loss. More importantly, it helped demonstrate tirzepatide’s cardiovascular safety, a requirement for type 2 diabetes drugs. A meta-analysis of the Surpass programme found a 19% relative risk reduction in major cardiovascular events with tirzepatide versus pooled comparator data; Surpass-4 accounted for the majority of these events. The go-to dose of tirzepatide will be 5mg, Lilly’s chief scientific officer, Daniel Skovronsky, said during the group’s first-quarter call, with the option to dose higher. If approved, tirzepatide will become the latest weapon in Lilly’s battle with Novo Nordisk in diabetes; the Danish group ditched a glucagon/GLP-1 co-agonist and a glucagon, GLP-1 and GIP tri-agonist last year, citing toxicity concerns. Lilly has its own tri-agonist, “triple G”, which it has said could be even better than tirzepatide. Phase 1 data with this project, as well as results from Surpass-1, 2, 3 and 5, will feature at next month’s ADA meeting.

Merus has managed to do what many others have not: show activity in pancreatic cancer. It did this by looking specifically at a genetic mutation: its lead bispecific, zenocutuzumab, produced a 40% overall response rate among 10 pancreatic patients with NRG1 fusions, an Asco abstract revealed. However, performance in other cancer types was less impressive. The analysis, of the phase 1/2 Enrgy trial plus an early-access programme, also included 18 patients with NSCLC and five with other solid tumours; across all 33 the ORR was 27% at a January 12 data cut-off. Merus, whose stock fell 5% this morning, will hope that the pancreatic result holds up – and perhaps for an improvement in other tumour types – when updated results are presented at Asco on June 4. The NRG1 fusion niche is small, with only around 1% of solid tumours thought to carry this mutation, but not many others are currently looking at this space. Merus’s main rival is Elevation Oncology, which is developing seribantumab, an asset Merrimack abandoned after its failure in NSCLC. Boehringer’s approved NSCLC drug Gilotrif has also shown evidence of a benefit in NRG1 fusion-positive patients, and is being investigated in the Asco-sponsored Tapur umbrella trial.

Last October Iovance pushed back the filing of its lead project, lifileucel, in metastatic melanoma from 2020 to 2021. Now the company has been delayed again, and does not expect to be able to submit the project to the FDA until the first half of next year. Standardising the autologous tumour-infiltrating lymphocyte therapy still appears to be the problem, with the FDA apparently unsatisfied with the company’s latest potency assay data. Work on these assays will continue, and lifileucel’s launch is now unlikely until 2023, Stifel analysts noted. Iovance is also trialling the project in cervical cancer, where the pivotal C-145-04 study is enrolling. Iovance’s latest delay might allow some of its rivals to catch up: since Evaluate Vantage last carried out this analysis several more TIL players have emerged, including Instil Bio, which recently pulled off a $368m IPO. Instil is developing both unmodified and genetically engineered TILs; Intima Bioscience and KSQ Therapeutics are working on Crispr-edited TILs. Iovance stock slipped 11% in early trade, with the company providing a cautionary tale to the rest of the space, by highlighting that, for cell therapies, generating clinical data is just part of the equation.

The table in this story has been updated to remove Genocea's GEN-011.