What is biopharma doing to develop vaccines against Covid-19, and what are the properties of each approach? Vantage takes a look.

While efforts to develop treatments for Covid-19 continue, it will probably not be possible to declare the pandemic truly over until an effective vaccine exists. Here numerous companies are also active, and a Vantage analysis reveals nearly 25 projects that should be of special interest.

Among these an mRNA vaccine has seized the early lead, courtesy of Moderna, though Johnson & Johnson’s promise to develop an adenovirus vector-based approach on a non-profit basis might have the most promise. However, despite understandable enthusiasm, the road to having a vaccine approved is long and treacherous.

The need to build sufficient manufacturing infrastructure is just one aspect that will slow the process, and that is before a vaccine with a sufficient efficacy is developed. It could also take a while to find a product with the right mix of safety and ability to generate antibodies that offer sufficient protection.

A recent article by the Coalition for Epidemic Preparedness Innovation (CEPI) in the NEJM pointed to the industry’s ability to respond quickly to the need for pandemic flu vaccines, but said those against Sars had not followed a similar path. Additionally, Covid-19 is an RNA virus, and the industry’s vaccine efforts against this type of pathogen, notably RSV, have underwhelmed.

It might surprise that in the coronavirus pandemic Moderna’s mRNA-1273, rather than more traditional vaccine approaches, has seized early attention. One key advantage of RNA (and DNA) vaccines is that they use synthetic processes and do not require culture or fermentation, offering much faster manufacturing.

Moderna itself claims that mRNA vaccines are better at mimicking natural infection, and highlights the “agility” of its manufacturing system. Production for a phase II trial could begin in a few months, and ultimately could allow millions of doses to be made.

Pfizer, which through a deal with Biontech hopes to enter the clinic with another mRNA vaccine this month, told Vantage: “We are working at record pace. While the development process can generally take years, we are working with partners and government agencies to find opportunities to save time wherever we can.”

Mechanistically, a prophylactic vaccine works by exposing the immune system to antigens unique to the virus in question, seeking to prime the immune system for the quick generation of large amounts of antibodies in the event of an actual infection.

An mRNA vaccine, for instance, comprises mRNA that codes for expression of such a protein antigen. Different vaccines have different properties in terms of whether they generate humoral (B cell and antibody) versus cellular (effector T cell) immunity, and at which sites this is elicited.

Beyond the modality that each vaccine approach uses, and whether adjuvanting is needed to potentiate the immune response, a key consideration is clearly the choice of antigen.

By far the most popular approach has been to target epitopes on Covid-19’s spike protein, a structure found on the surface of the virus. Ideally, antibodies raised against this could bind the virus immediately and stop the infection of host cells. Some vaccines target other so far undisclosed epitopes or proteins.

The CEPI has outlined how carrying out multiple activities simultaneously rather than linearly could curtail development times in a pandemic, and J&J says an accelerated timeline could see its lead vaccine being ready for emergency use in 2021.

That would represent an extraordinarily fast turnaround, but even so a vaccine of some sort might be needed even sooner. Thus even a suboptimal vaccine with moderate efficacy that could merely reduce the severity of Covid-19 infection might be a viable way of protecting people as next winter approaches, some think.

“It is hard to imagine fully returning to a pre-Covid-19 life until we have an effective vaccine, most of the population has been infected, or we have therapies that can turn nearly 100% of severe cases into nothing more than the annual ‘flu’,” says Dan Chen, chief medical officer of IGM Biosciences and a coronavirus expert by virtue of his PhD thesis.

This will require global governments to follow through on funding promises. The NEJM paper’s authors caution that the Sars and Zika epidemics ended before vaccine development was complete, at which point federal funding dried up and developers were left nursing losses.

Biopharma obviously wants to play its role in the pandemic, but it will be acutely aware that all too often vaccine development represents an economic black hole.

This story corrects some earlier mistakes in the table. 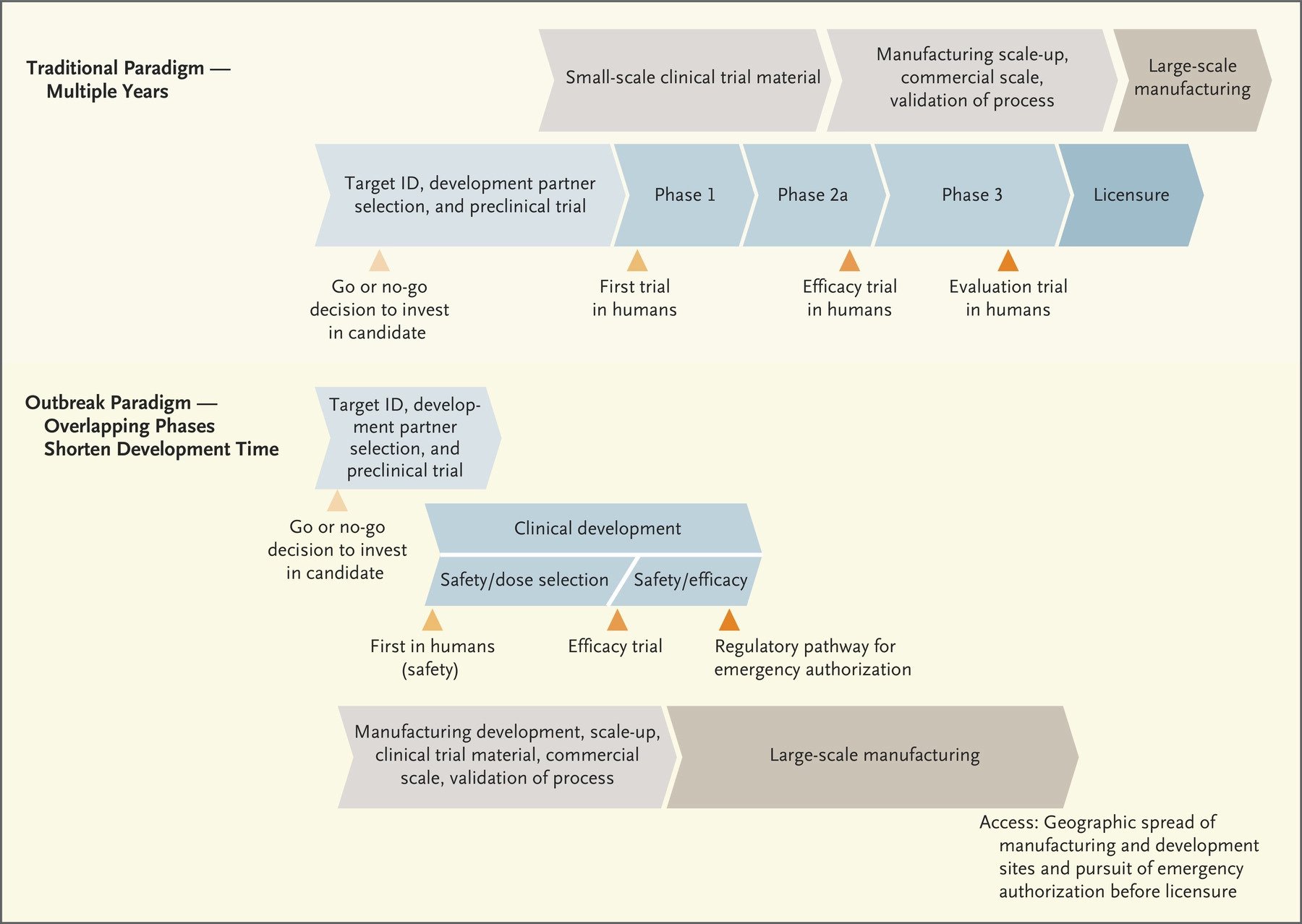 The next triggers in Covid-19 vaccine development

Europe needs to be clearer about Covid-19 vaccines

The sellside has picked a winning Covid-19 vaccine – for now