Bristol-Myers Squibb’s $74bn bid for Celgene led to a huge quarter, but a drop in the deal count could give pause to those hoping for a bumper year.

Deal bankers and investors hoping that 2019 will be the year that biopharma M&A picks up again can take heart: a whopping $92bn was spent on deals in the first three months of this year, the biggest quarterly total since 2014.

But without Bristol-Myers Squibb’s $74bn bid for Celgene the first quarter looks average. And there is bad news for those hoping for more deals: the volume of acquisitions has fallen well off the peak seen during the biotech boom. 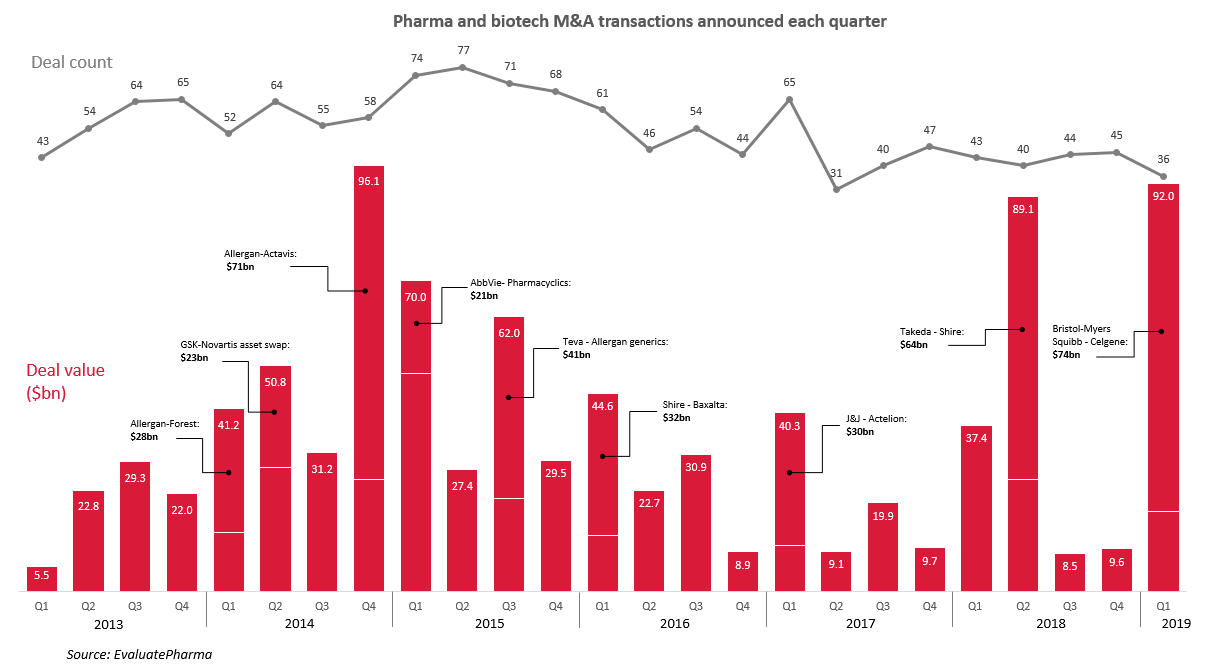 The analysis above encompasses only companies involved in developing human therapeutics, and excludes medtech or broader healthcare firms.

It reveals that, notwithstanding a couple of blips, the number of deals has been tailing off in the past few years. Big players have been kept on the sidelines by what they see as overblown expectations from their would-be targets, while smaller companies, benefiting from buoyant venture capital and IPO scenes, have been able to hold out for bigger sums.

While the first-quarter numbers show this trend continuing there are signs that the stalemate might be about to end. The Bristol/Celgene deal, although massive, probably only came about because, after a string of management missteps, Celgene was worth a lot less than in the past.

The subsequent rise in Celgene’s stock – the group was the biggest large-cap climber in the first quarter – suggests that the company’s shareholders have accepted this as the best deal they could realistically hope for (US big biotechs lag in the opening quarter of the year, April 3, 2019).

Bristol’s investors have not been so happy, although attempts to disrupt the takeover look to have petered out. The final word will come at a Bristol shareholder vote next week. The transaction flatters the first-quarter numbers, but beyond it there are some reasons for cheer, with some smaller but still chunky deals from Lilly, Roche and Ipsen.

Roche’s move on Spark, along with Biogen’s takeout of Nightstar, has also raised hopes that gene therapy could prove a fertile hunting ground for acquirers, sending up the stock of others in the space. But apparently not everybody is happy about the former deal: Roche has had to extend its offer after a lukewarm reaction from Spark’s investors suggested that many had been hoping for even better terms.

Gene therapy is certainly flavour of the month, but there are still questions over how these products will fare commercially, particularly with lingering issues around how they are funded. If sales of early contenders disappoint, big pharma’s interest in the field could wane. In the meantime, fear of missing out might drive more gene therapy deals.

Back to the bigger picture, any hope that the M&A tide is turning should be tempered by the fact that recent years have also started with a bang but ended with a whimper, and 2019 might be no different.

Still, the need for growth, the main driver of M&A, is not abating. Several big names are desperate for a boost: Biogen, Abbvie and Allergan immediately spring to mind, although there are others. And mid-sized players like Ipsen and Lundbeck have made no secret of their desire for fresh blood.

This pent-up demand could lead to more deals over the rest of 2019. But a lot will depend on whether the valuations of targets continue to come down, and whether smaller players are willing to accept the new reality.