The overall rate of device approvals in 2019 is holding steady on last year – but the types of approvals are different.

The FDA’s attempts to liberalise the medical device approval processes seem to have been stymied somewhat by the US governmental shutdown in early 2019. Consequently the number of approvals and clearances granted for innovative technologies is tracking exactly level with last year.

But a closer look at the figures shows a slightly unexpected finding. The number of de novo clearances – the route by which low-risk novel devices reach market – which has exploded in popularity in recent years, has fallen sharply. True, this trend could reverse in the second half of 2019, but it does prompt questions about whether the FDA can achieve its aims of speeding up approvals of low-risk devices. 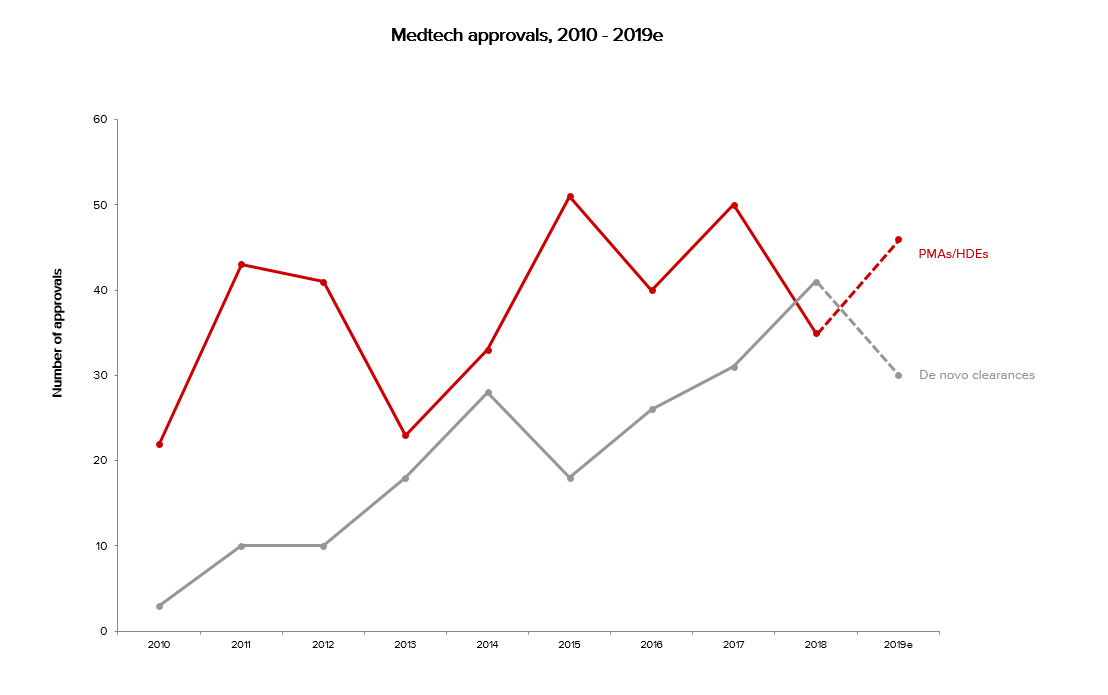 The graph above shows projected figures for the entirety of 2019, assuming that the current rate of approvals continues until the end of the year.

The FDA intends to bring in changes that it expects will boost the popularity of the de novo 510(k) clearance pathway – requiring companies to use more recently approved devices as predicates, for example. But these changes have not been implemented yet, and in any case there are questions over exactly how effective they might be (The FDA’s proposed changes to device regulation are thin on detail, December 11, 2018).

As befitting their status as one of the fastest-growing segments in medtech, most of the low-risk devices to reach the US market were for neurological applications. Neurosigma’s Monarch device, which stimulates the trigeminal nerve to treat attention deficit hyperactivity disorder, is one such example – it is external rather than implanted, enabling it to be classified as low-risk.

Another interesting thing is that the same number of in vitro diagnostics came to market via the pathway for high-risk innovative devices, premarket approval, as by the de novo process. Last year, more than twice as many assays received de novos than PMAs (Approvals of high-risk devices drop as de novos take off, January 24, 2019). 2017 also saw more IVD de novo clearances than PMAs.

In part this change reflects the race to develop companion diagnostics for cancer drugs and other oncology tests, which have life-or-death implications for patients and therefore qualify as high-risk products. One of these, Qiagen’s Therascreen PIK3CA Kit, received two separate PMAs on the same day. The test is a companion to Novartis’s Piqray, approved in May to treat hormone receptor-positive, Her2-negative breast cancer with a PIK3CA mutation.

One of the PMAs for Qiagen’s PIK3CA test covers its use with tissues samples, and the other with plasma. Because of this, though these analyses show three IVD de novos and four IVD PMAs, there were actually only three tests to reach market via each regulatory pathway.

The most populous therapy category among the high-risk devices, with 10 approvals, is cardiology – since implanted devices are automatically classified as high-risk this is to be expected. Boston Scientific’s Lotus transcatheter aortic valve, Impulse Dynamics’ Optimizer Smart heart failure device and Biotronik’s Orsiro drug-eluting stent all fall into this category.

Overall, with 15 de novo clearances, 23 PMAs (for 22 devices) and one humanitarian device exemption – this last went to Novocure’s NovoTTF-100L system for the treatment of mesothelioma – 38 innovative devices and diagnostics were ushered out to US patients in the first half of this year.

Should this pace be maintained in the second half, 76 new products will be made available – precisely the same number as last year.

Axonics is the latest company to get a US neurostimulator approval

Diagnostics beat implants in the race to market

The FDA takes its foot off the pedal