Medtech VC and the billion-dollar era

The first one-shot billion-dollar venture investment round in the medical technology sector has gone to Verily as computing bleeds into medicine.

What is it about the final months of the year that prompts venture investors to think about spending? The first quarter of the last three years has seen private funding deals worth more than $2bn in total, meaning when the rest of us were saving for Christmas presents VC syndicates were gearing up to spend on companies developing promising medical technology.

And almost half the first quarter’s total came from a single deal. Verily Life Sciences, the somewhat opaque jack-of-all-trades health technology group that is sister company to Google, scooped the industry’s first $1bn venture round on January 3. Nearly ten times the size of the next biggest round so far this year, the deal underlines the growing faith financiers have in the value of data-driven healthcare. 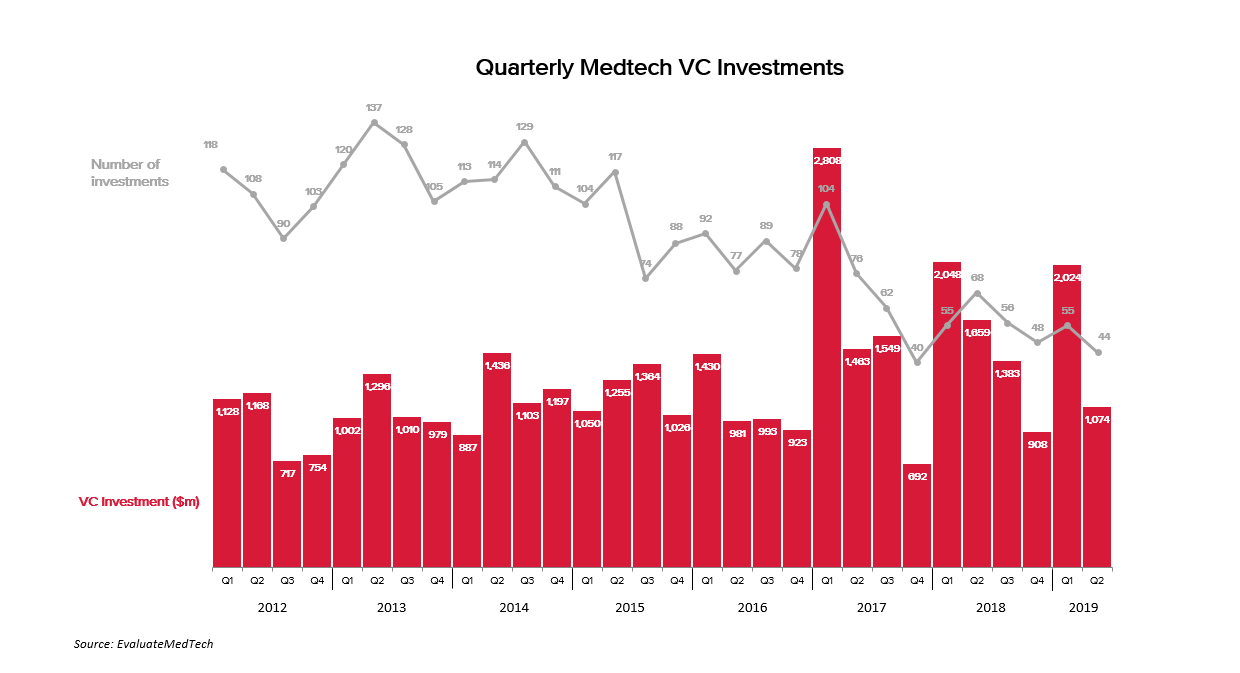 If the richness of recent first quarters is one of the obvious trends in the above graph, the other is that the hoped-for recovery in the number of venture rounds done in each period is fizzling out. True, the 44 financings in Q2 of 2019 beats the 40 seen in Q4 2017, but the overall downturn over the past decade cannot be ignored.

It is perhaps surprising how early some of 2019’s largest rounds were in the companies’ development. Verily’s blockbuster financing was only its second reported round, and Thrive, Archer and Pear Therapeutics made the top 10 table with A, B and C rounds, respectively. Overall, early investment in medtechs is falling alarmingly, as this analysis shows, but clearly some groups are able to tap into VC’s largesse.

Thrive is a case in point. The groups is active in the hottest technological space in medtech, developing a liquid biopsy, CancerSeek, which is designed to not only diagnose cancer early but also to detect the organ of origin (Thrive emerges with cash, a cancer blood test, and a plan, May 30, 2019).

Archer is also developing a liquid biopsy, but this is only one of the ways in which the group is applying its next-generation sequencing. It also has assays that run on tumour tissue samples, as well as companion diagnostics and tests that screen for inherited disorders in newborns.

Pear Therapeutics is applying novel computing-based technology to treating diseases in a different way. It is one of the emerging groups developing digital medicines – software, such as apps and computer games, that are regulated and prescribed as medical devices. Pear’s Reset app, designed to help patients with addiction problems remain abstinent from drug abuse, gained FDA de novo clearance in September.

Advanced computing-based tech such as genetic sequencing, digital medicines and the kind of large-scale data crunching promised by Verily have one enormous advantage over other medical devices: they are cheap. Computing power is constantly dropping in price, and the development of software does not require dedicated laboratory facilities or hospital-based clinical trials.

This helps explain why medtech’s heavy-hitters are outplaying biopharma’s in terms of attracting venture financing. A comparison of the top three largest-ever rounds in the two sectors shows Verily and liquid biopsy group Grail are way ahead of the only biotech group to crest $450m, mRNA company Moderna.

This isn’t the whole picture, of course – biopharma attracts far more VC action overall than medtech. It’s just that in medtech the distribution of the cash is extremely unequal.