Venture funding drops again, but there’s no need to panic yet.

It might be too soon for biopharma start-ups to worry about venture capital funds drying up. But the slowdown in VC financing seen towards the end of last year has continued into 2019, suggesting that venture cash is getting harder to come by.

True, 2018’s record-breaking haul would always have been difficult to replicate, and 2019 could still be on track for a respectable total, historically speaking. But if the decline in funding continues – or gets even more pronounced – it could become a cause for concern among young companies seeking cash.

This analysis of EvaluatePharma data includes only companies developing human therapeutics, the highest-risk end of biotech venture investing, and excludes subsectors like medtech or genomics.

If the activity seen in the first quarter is maintained for the rest of 2019, VC funding this year would come to $14bn, an amount bettered only by 2018’s spectacular total (Biopharma's record venture year ends with a slowdown, January 16, 2019).

While the 2018 performance was probably always going to be unsustainable, one worrying sign in the first-quarter figures was a relatively low number of funding rounds. Even at the current pace, the total count would dip to 388 in 2019, well below that seen in previous years.

This suggests that the concentration of wealth into few hands – for example companies in hot areas like oncology or cell and gene therapy – is getting ever more pronounced. This might not be a good thing for the biopharma ecosystem if it means that less popular sectors are being neglected. Still, the number of really big rounds also seems to be on the decline. 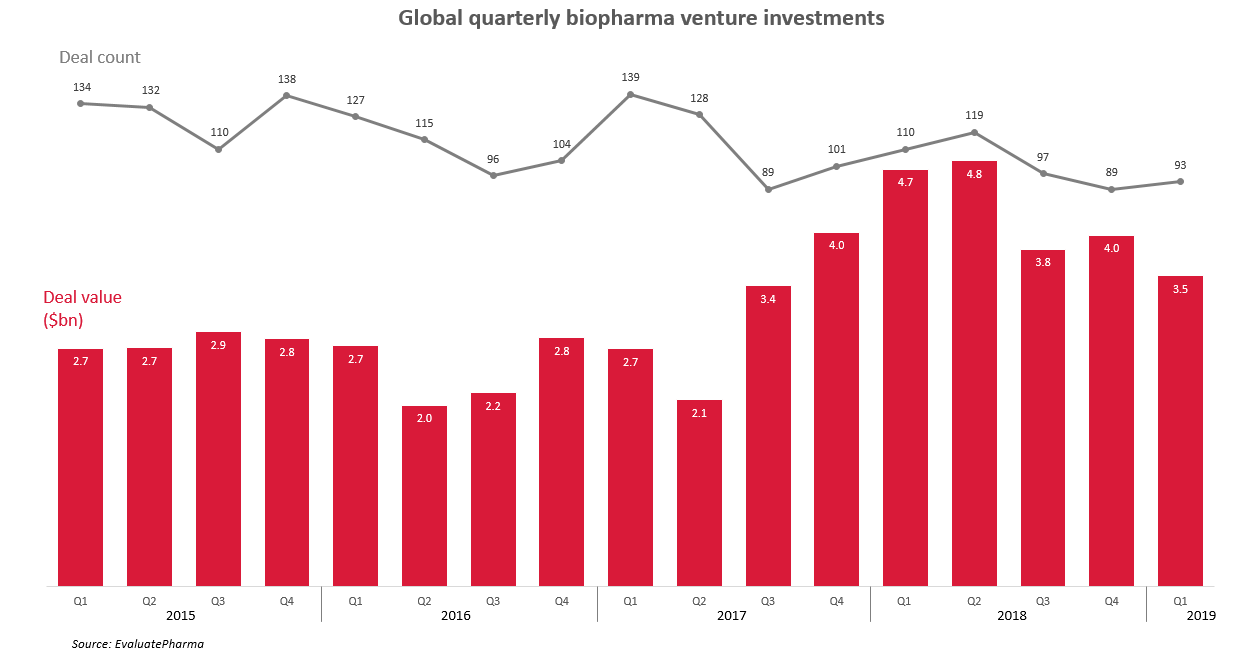 Oncology companies dominated the list of the biggest VC raisers of the first quarter. Interestingly, four of these were based at least partly in China, which is seeing an explosion of interest in cancer therapies.

One of these groups, Gracell Biotechnologies, is attempting to develop low-cost CAR-T therapies. Chinese companies have already shown that they are keen to undercut their rivals in the PD-(L)1 space, raising fears among some – and hopes among others – of a price war spreading to the US (China’s blueprint for a checkpoint blocker price war, March 21, 2019).

The only European company to make it into the top 10 was the mRNA and cell therapy specialist Biontech, which has now raised around $390m in total, a big haul for a group whose most advanced assets are in phase II. There are rumours that the German company plans to follow its mRNA rival Moderna onto the US public markets in an IPO worth up to $800m, giving it a $4bn valuation.

Biontech looks positively elderly compared with Beam Therapeutics. The preclinical-stage Crispr specialist’s $135m round – coming less than a year after it was launched with an $87m financing – shows that there is still plenty of venture cash about for companies in the most hyped areas, even if they have not yet produced any clinical data.

A resurgence in biopharma IPOs since the end of the US government shutdown, as well as a good performance of listed companies in 2019 so far, show that the sector is still in rude health, which should help convince venture investors to keep parting with their money.

The VC numbers seen in 2018 look unlikely to be repeated any time soon, if ever. The signs so far suggest that 2019 will see a return to more sustainable but still strong levels of investment.

Biopharma venture financing retreats, but not by much