Speedy US approval for Amgen’s Lumakras was an embarrassment for Mirati, which has gone quiet as its share price has drifted downwards.

2021 has not been kind to Mirati. The group started it ahead of Amgen in a clinical battle of the Kras inhibitors, but it was Amgen’s Lumakras that got early approval in May, while Mirati’s adagrasib will not even be filed until later this year – an embarrassing black mark for the heavily backed biotech.

During this time Mirati’s shares have come off 35% amid a dearth of meaningful investor updates, and its quarterly calls have not even featured a presentation or Q&A for analysts. But the group is still worth $7bn and boasts $1.2bn in cash, and the sellside has started priming the markets for upcoming clinical data that some hope might enable adagrasib to make up lost ground.

At its update last October adagrasib’s ORR in the Krystal-1 trial was running at 45%. However, this was in just 37 patients, while Amgen’s dataset comprised 124.

Thus Mirati’s next Krystal-1 update, due in the second half, is important, representing the data Mirati will take to the FDA, and comprising 115 NSCLC patients, according to Evercore ISI’s Umer Raffat. As a potential bonus there will be colorectal cancer patients in this dataset too; Amgen has effectively given up on this cancer, so if Mirati’s data are strong enough they could support a broader label for adagrasib. 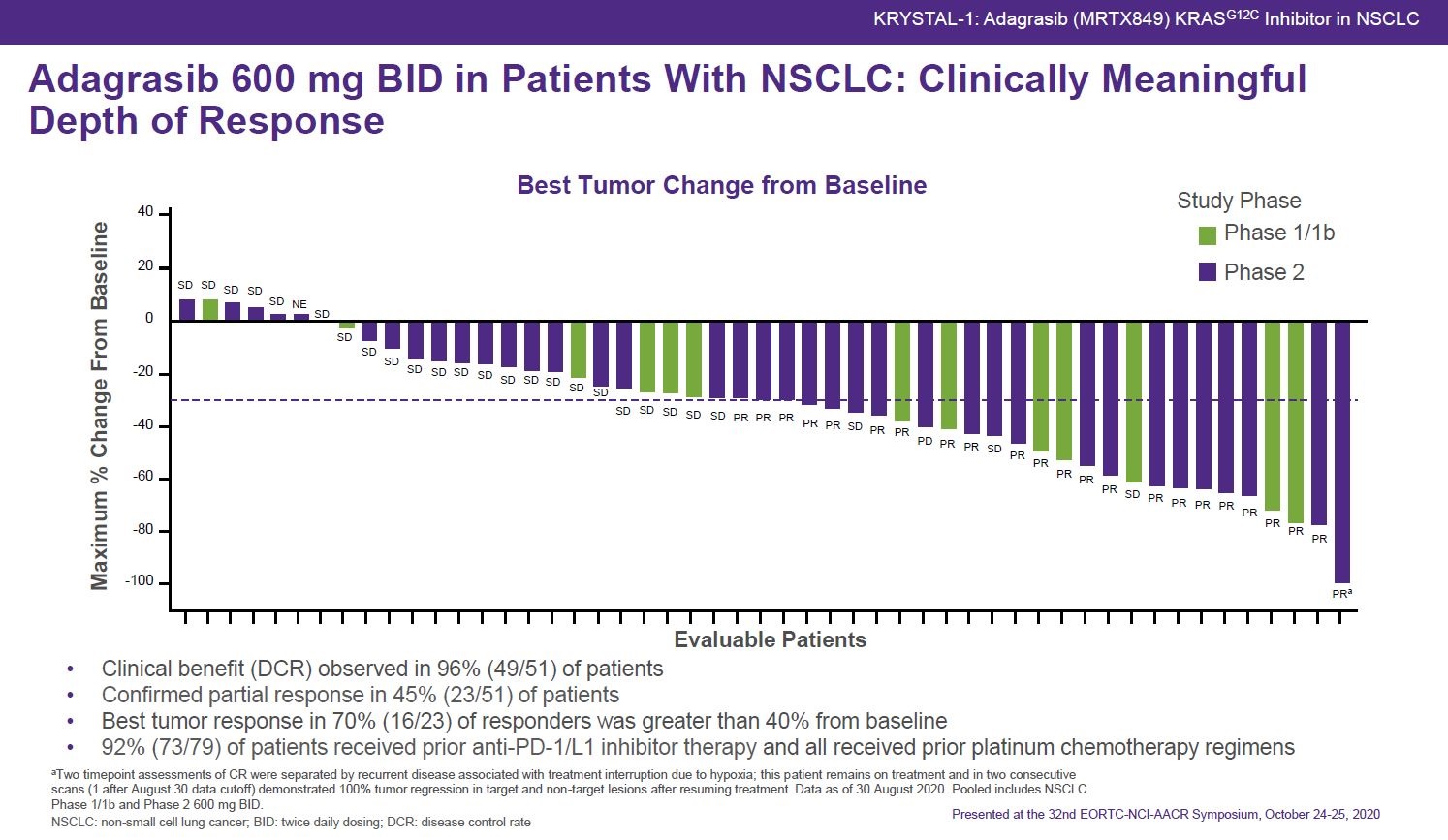 There are other ways Mirati could steal a march on Amgen, Evercore and Leerink analysts reckon. One is a separate adagrasib/Erbitux combo in colorectal cancer that should also yield initial data soon; another is a front-line NSCLC study, in combination with Keytruda, that will yield proof-of-concept data in the second half.

Mirati has also made much of adagrasib’s potential in Kras-positive NSCLC patients with the STK11 co-mutation, a biomarker associated with especially poor outcomes. However, a front-line NSCLC monotherapy trial in Kras G12C/STK11 co-mutants has only just been initiated, and Amgen has said that Lumakras has activity here too.

Still, while the sellside seems happy to play up the ways in which Mirati could, in Leerink’s words, “leapfrog” Amgen, it is hard to ignore the risks that still remain for the smaller biotech.

Even after its 35% year-to-date fall Mirati is still worth $7bn, and you can hardly blame some investors for wondering precisely what this valuation bakes in. At the same time, many will be frustrated at the group’s reticence: while Amgen has made hay, securing US approval for Lumakras two and a half months ahead of its Pdufa date, Mirati has apparently sat back while its stock has drifted.

For instance, there has been no update to the Krystal-1 dataset since last October, and Mirati’s only adagrasib statements of any note this year have related to US breakthrough designation and a China deal with Zai Lab.

One area that investors should pay attention to is adagrasib’s toxicity profile, especially its 3% rate of grade 3 or 4 QT prolongation, against none for Lumakras. Both molecules are associated with liver toxicity, and Lumakras has a label warning of interstitial lung disease; no doubt both will be scrutinised in Mirati’s upcoming expanded dataset.

There is still much to play for, but Mirati needs to give investors some proper answers, fast.

After this story was published Mirati clarified that no data from Krystal-7 would be forthcoming in 2021.

Amgen strikes while its rival is down