Data in the desmoid tumour niche look strong, but Ayala might provide a cheaper way for investors to play in gamma secretase inhibition.

Springworks Therapeutics looks on course to get its lead project, the gamma secretase inhibitor nirogacestat, approved for desmoid tumours, after presenting strong data over the weekend at Esmo.

However, this is a small niche, and the big hope for the group must be multiple myeloma, where nirogacestat is being trialled in combination with several BCMA-targeting agents – an approach underscored by the strengthened partnership between Springworks and GSK last week.

Still, there are doubts about this approach, with Allogene recently canning its ALLO-715/nirogacestat combo. And any investors seeking exposure to gamma secretase inhibitors might do well to look at Ayala Pharmaceuticals, which just reported early data with its contender, AL102, but which trades at a fraction of Springworks’ valuation.

Ayala’s $28m market cap is dwarfed by Springworks’ $1.4bn, even with the latter’s share price slide in spring, when reality hit for the group.

At least Springworks is closing in on desmoid tumours, which it says affect around 30,000 people in the US, with 5,000-7,000 of these under active treatment.

The phase 3 Defi study, which was presented at Esmo on Saturday, showed an impressive 71% reduction in the risk of disease progression with nirogacestat versus placebo; the overall response rate was 41% with drug versus 8% with placebo. 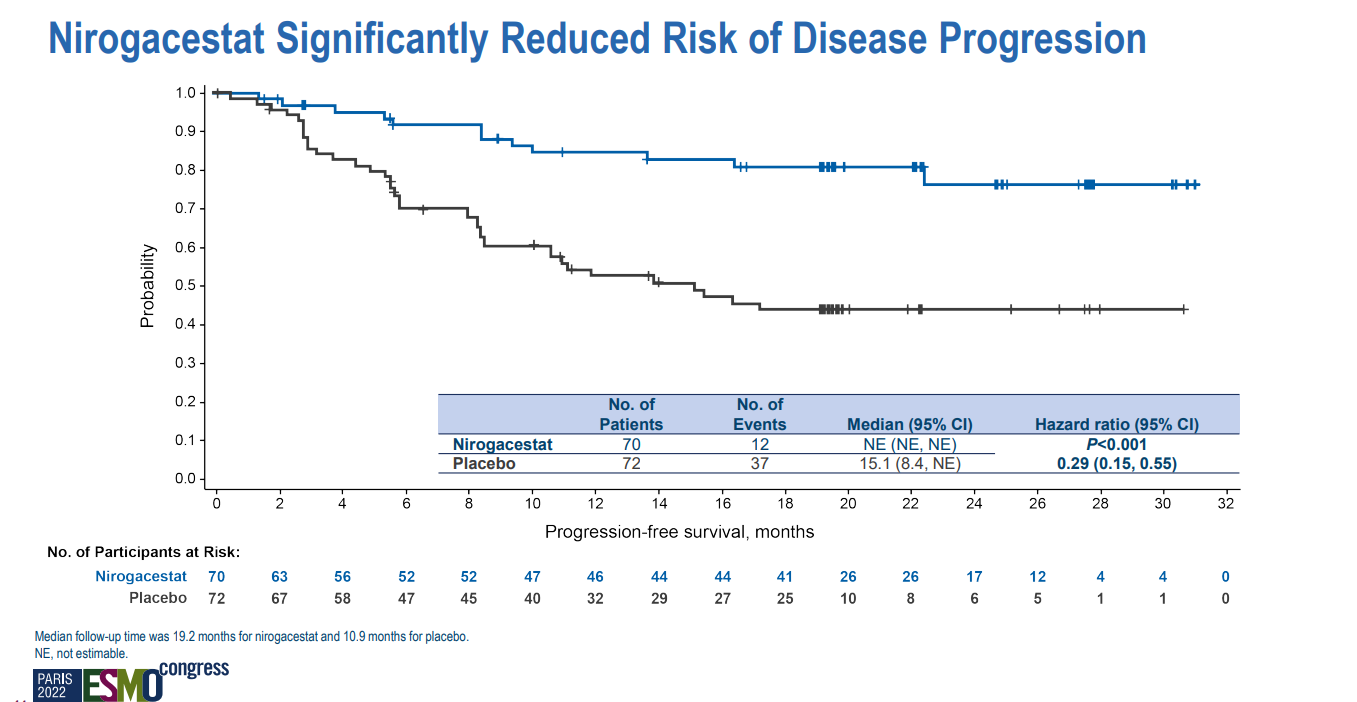 Springworks plans to file nirogacestat for desmoid tumours in the second half, but investors seem understandably nervous about the prospect of a solo launch for a use that looks unlikely ever to become profitable.

Meanwhile, Ayala today reported results from part A of its phase 2/3 Ringside trial, which tested three different doses of AL102. Of 29 patients evaluable at 16 weeks, one had a partial response that was later confirmed; there were also three more unconfirmed partial responses at later timepoints.

Ayala is now taking the 1.2mg once-daily dose into part B of Ringside. The primary endpoint is progression-free survival, giving an opportunity for a cross-trial comparison against nirogacestat.

As for combo use, Springworks has various approaches in play, with GSK’s buy-in the biggest endorsement here. The big pharma’s motivation appears to be producing similar efficacy to Blenrep alone, but allowing a lower dose to reduce the ocular toxicity seen with the ADC.

However, as well as Allogene’s decision to back away – which was not reflected in Springworks’ Esmo presentation – Precision Biosciences does not seem to be getting much joy either with a combination of its allogeneic Car-T PBCAR269A and nirogacestat.

AL102, meanwhile, is being trialled with Novartis’s WVT078 in multiple myeloma. Ayala recently said it would start a study of its project in T-cell acute lymphoblastic leukaemia around year-end.

Springworks sees the way to a small market niche