Alector, Cassava and Annovis play up mixed data in dementia, but the markets aren’t buying it.

Investor reaction to early data presented yesterday at the Alzheimer's Association International Conference has shown that the rising tide of Biogen’s Aduhelm is not able to lift the boats of all speculative early-stage biotechs competing in this space.

Alector, Cassava and Annovis were punished heavily after presenting early data in dementia at the meeting yesterday. Two of the three studies had no control cohort, so comparisons were either against baseline or versus the highly subjective measure of historical controls, and the one that did, Annovis’s, actually demanded the greatest suspension of investor disbelief.

Investors were not buying it, sending Annovis down 60%. The company’s lead project, ANVS401/Posiphen, is an oral inhibitor of amyloid precursor and other “neurotoxic” proteins, and in May was claimed to improve cognitive symptoms, prompting Annovis to trade up 127%.

Yesterday’s presentation of a fuller dataset from 14 Alzheimer’s patients in a phase 1 safety study showed ANVS401 yielding a 4.4-point improvement in Adac-Cog11, versus a 3.3-point improvement for placebo, resulting in a highly non-significant p value of 0.13.

Various other measures claiming numerical but not statistical improvements were also cited, but the worst came from the MMSE test at 25 days. Here there was a 0.8-point improvement for ANVS401, but remarkably placebo recipients did better, improving 1.2 by points. While Annovis insisted that the data showed ANVS401 to be effective in Alzheimer’s and Parkinson’s its two-month party has come to an end. 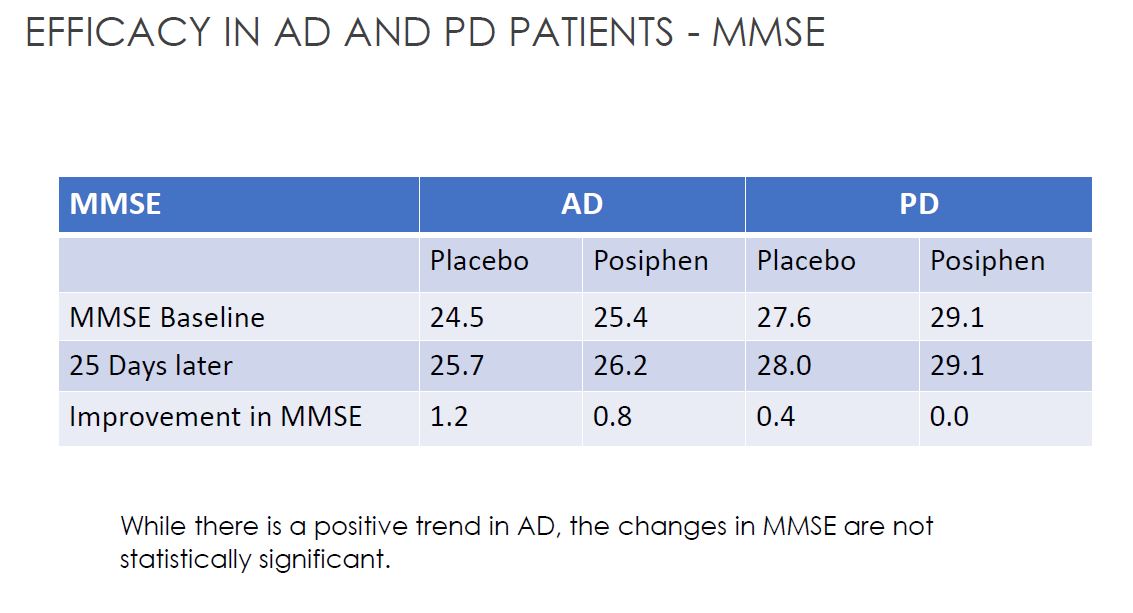 Cassava’s simufilam, meanwhile, is also oral, and restores the normal shape of filamin A, an action said to block amyloid-beta’s toxic signalling. Its phase 2 study does have a placebo control, but the AAIC data concerned nine months’ open-label treatment in 50 subjects.

Here the group said it had seen a mean three-point improvement in Adas-Cog11, as well as pointing to improvements in biomarkers such as amyloid-beta in the cerebrospinal fluid (CSF) and Tau. It claimed that this was meaningful, pointing to a meta-analysis suggesting that mild-to-moderate Alzheimer’s patients typically decline 5.5 points over this time period, adding that two Aduhelm studies had shown a 5.2-point decline.

This cut no ice with the markets, which sent Cassava down 24%. Simufilam’s next test will be a 12-month readout of the uncontrolled data, before the phase 2 study embarks on its 12-month placebo-controlled stage, which investors clearly do not think has been derisked by yesterday’s historical comparison.

For its part Alector presented only biomarker data, showing a 12-month cut of the Infront-2 phase 2 trial of its lead asset, AL001, in frontotemporal dementia patients with a progranulin mutation. AL001 is an antibody said to prevent progranulin degradation by blocking sortilin, a membrane protein.

Alector's stock closed down 21% even though the data showed AL001 to be doing what it was supposed to: progranulin was restored to normal levels in plasma and the CSF throughout treatment, Alector said. However, the extremely wide range of matched control data it provided appeared to negate the positive signal.

Also important were data concerning neurofilament light (NfL) chain, a key marker of neuronal damage. Accounting for error bars NfL remained stable throughout the 12 months of the trial, though perhaps investors focused on the mean concentrations, which numerically showed a decline in both plasma and the CSF.

Infront-3, a global phase 3 study of AL001, is enrolling. Alector’s selloff notwithstanding, it is probably fair to say that the AAIC data do at least support Alector’s approach to treating this rapidly progressing form of dementia. 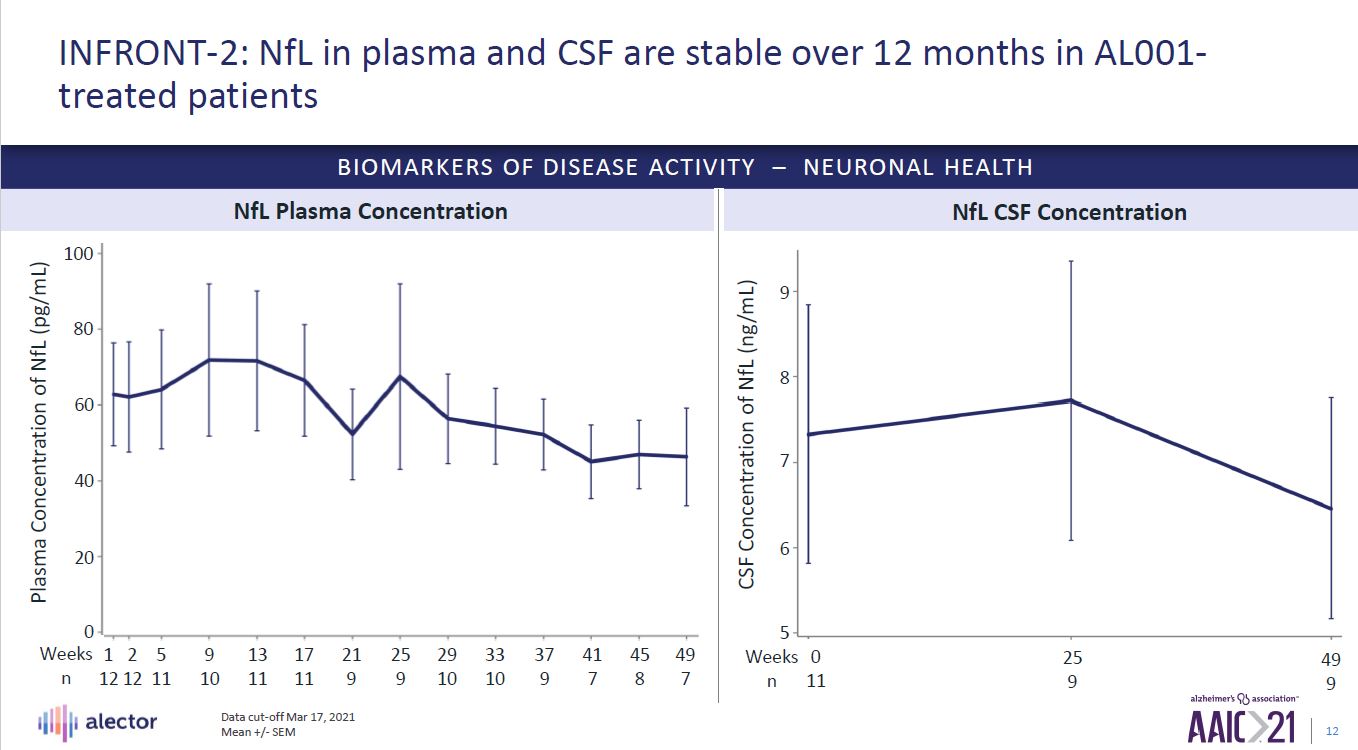