Amgen has gone further than anyone before to crack KRAS, but caution is required, as efficacy might ultimately not be as positive as initial data suggest.

KRAS was undoubtedly the big news of this year’s Asco meeting. But excitement over hopes that companies including Amgen and Mirati could soon hit this supposedly undruggable target should be tempered with a dose of reality.

For one, this concerns an early cut of phase I data with Amgen's AMG 510, the most promising of which came in just 10 patients and might flatter the overall result. And Mirati, whose market cap now sits at $3.2bn, looks overvalued for a group yet to report clinical data with its KRAS inhibitor MRTX849.

Investors nevertheless sent Mirati’s stock up 32% yesterday on hopes that Amgen had validated its project; both AMG 510 and MRTX849 are designed to hit the KRAS G12C mutated protein.

Amgen itself added nearly $3.5bn to its market cap on yesterday’s data. Still, with Leerink analysts forecasting AMG 510 sales of $2.3bn by 2028 – and then only in the best-case scenario that it succeeds in various cancer types – this rise looks optimistic.

The headline findings from the phase I trial, which enrolled patients with various solid tumours harbouring the KRAS G12C mutation, were undoubtedly impressive: in 10 evaluable NSCLC patients, five had a partial response to AMG 510.

Four more patients had stable disease, while one showed disease progression; the results were particularly remarkable given that patients had received at least two prior lines of therapy. And there were hints of a dose response, with three of the partial responders receiving the highest dose of AMG 510 tested, 960mg. 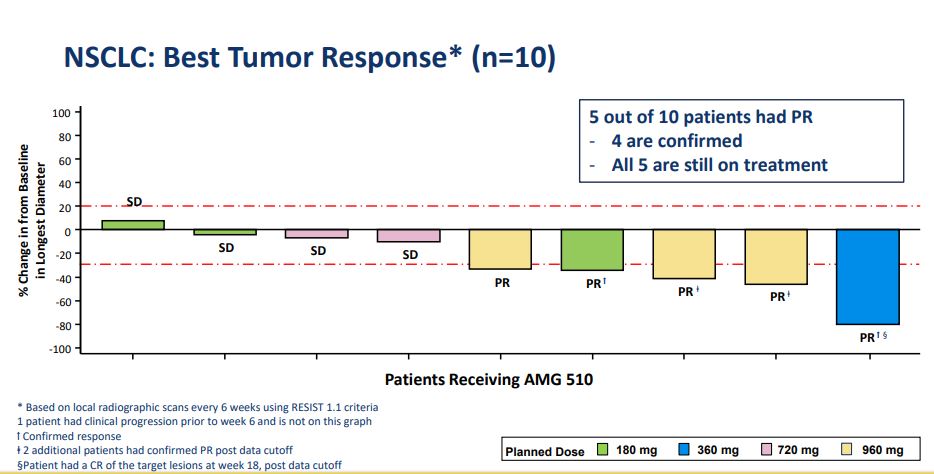 But the number of patients involved was clearly very small. Four further NSCLC subjects have been enrolled but have yet to receive a CT scan so are not evaluable, Sanket Agrawal, general manager of Amgen’s KRAS programme, told Vantage.

The pressure is on Amgen to maintain this level of remission as more data are generated, and any sign of waning efficacy will not be taken kindly by bullish investors. On the other hand, the group said it had seen a sixth confirmed partial response after the Asco data cut-off, while one partial responder went into complete remission.

Of the 35 patients enrolled so far – which also included 19 with colorectal cancer and two with appendix adenocarcinoma – nine discontinued AMG 510 owing to progression. In total, 29 patients were evaluable at the data cut-off of April 4.

The data in colorectal cancer were less promising. There were no partial responses here, and the best that Amgen could say was that 13 of 18 evaluable subjects achieved stable disease.

Some analysts believe that colorectal cancer is a tougher indication to treat, even when selecting for the G12C mutation. Evercore ISI’s Umer Raffat noted that another targeted therapy, Braf/Mek inhibition, produced lower efficacy in colorectal cancer versus melanoma.

Mr Agrawal said that differences in biology might explain the varying results with AMG 510, but added that it was too early to come to conclusions and noted that only one colorectal cancer patient had so far received the 960mg dose.

In any case, NSCLC should account for the lion’s share of AMG 510 sales, if the project makes it to market: 13% of NSCLC patients have G12C mutations, versus 3% of those with colorectal and appendix cancers.

More colorectal cancer patients have been included in the AMG 510 study merely because this group is routinely screened for KRAS mutations, Mr Agrawal said. He added that Amgen was agnostic about which tumour types it would include in its trial; the mutation is also present in 2-3% of pancreatic cancer patients, for example.

The company plans to enrol “a few” more patients in the dose-exploration phase – Mr Agrawal would not say exactly how many – but the main focus now will be on the dose-expansion portion of the trial, which will include 40-60 patients and use 960mg.

Amgen is considering moving AMG 510 into earlier lines of therapy, and is “exploring opportunities” with other KRAS mutations, Mr Agrawal said, as well as testing AMG 510 in combination with PD-(L)1 inhibitors.

The KRAS field is getting crowded, despite the recent failure of Astrazeneca and Ionis’s antisense project, AZD4785. Amgen is focused on advancing AMG 510 as quickly as possible but, with the pipeline still so early, there are likely to be more twists in the KRAS story.

Astra’s first attempt fails, but there’s no giving up on KRAS