A mid-stage study of enfortumab illustrates the relevance of nectin-4 in urothelial bladder cancer, and is hailed by experts as registrational.

Seattle Genetics in March struck gold with topline results of the EV-201 trial of its anti-nectin-4 conjugate enfortumab vedotin in urothelial bladder cancer. Today the group’s late-breaker at Asco confirmed that the dataset was registrational, giving the company a way to diversify beyond Adcetris at last.

Perhaps the study’s most important finding is the role that nectin-4 plays in this cancer: investigators said that almost all of urothelial cancers expressed this cell adhesion molecule. This will be of particular relevance to followers of the recently listed Bicycle Therapeutics, which seems to be the only other player pursuing this approach.

Of course, Bicycle is well behind Seattle in development; BT8009, which Bicycle describes as a bicyclic peptide toxin conjugate against nectin-4, is still in preclinical trials, whereas enfortumab, partnered with Astellas, is in phase III.

At this year’s AACR meeting Bicycle revealed promising preclinical data for BT8009, and said this approach had potential in breast, pancreatic, lung and oesophageal tumours in addition to bladder cancer. IND-enabling toxicology work is ongoing, it stated.

Seattle, meanwhile, is already planning a US filing for accelerated approval based on the remission rate seen in the EV-201 trial, and hopes to use survival data from the pivotal EV-301 study to provide confirmatory evidence later.

When the EV-201 data were toplined in March it seemed remarkable that the study’s 44% objective response rate, in a population not preselected for nectin-4, came in in line with the 41% reported from an earlier trial in nectin-4 expressers. But this can be explained by the fact that nectin-4 is found in 97% of urothelial cancers, today’s Asco press briefing heard.

The EV-201 cohort comprised 125 subjects who had all failed platinum chemo plus a checkpoint-blocking MAb, representing a population with no approved options, said University of Virginia’s Dr Robert Dreicer, an Asco expert, during the press call. 15 of the 55 responses were complete.

Median progression-free and overall survival in this single-arm trial were 5.8 and 11.7 months respectively. Dr Dreicer said median OS approaching a year was important, even though this was a small trial, given that “the best we have” with front-line chemo at present was 13 months. 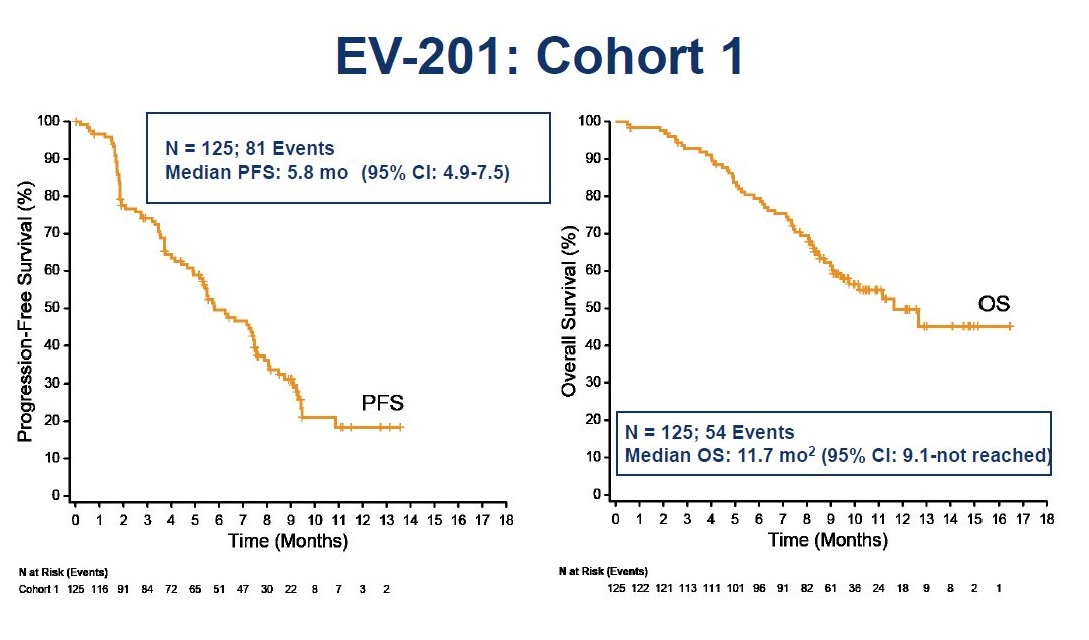 It was also noteworthy that efficacy was impressive in subjects who had progressed on an anti-PD-(L)1 drug without responding to it, where the ORR was 41%. Another new finding highlighted at Asco were the 19 responses among 50 patients with cancer that had metastasised to the liver, representing a hard-to-treat population.

Among not so positive findings, one EV-201 subject died owing to treatment-related interstitial lung disease. However, this investigator assessment was confounded by a “suspected pulmonary infection”, Asco heard.

Presenting the EV-201 data, Professor Daniel Petrylak, from the Yale School of Medicine, said nectin-4 had only been discovered in the past five years. It might therefore be logical to expect industry interest in this target to pick up beyond the work currently being done by Seattle and Bicycle.

Professor Petrylak also had no doubt that the results supported a US accelerated approval submission for enfortumab, which carries 2024 revenue forecasts of $498m, according to EvaluatePharma sellside consensus.

The sentiment was echoed by Dr Dreicer, who told the press conference: “I would support accelerated approval; I hope the FDA shares that [view].”

Seattle could waltz in where Astra failed