EASL 2019 – Viking to push the limits of its Nash contender

Encouraging results from Viking Therapeutics’ lead Nash project have prompted the company to ask how low it can go.

Encouraging signs of efficacy with Viking Therapeutics’ thyroid receptor antagonist VK2809 are emboldening the company to examine whether the compound’s therapeutic window can be pushed open even wider.

At EASL today the group presented impressive reductions in liver fat in patients dosed with 5mg of VK2809 once daily; this was the lowest dose tested in a recently completed phase II study that also included 10mg given either once a day or once every other day. Responses were similar across the dose groups.

Viking shares have risen 19% since the 5mg data were first disclosed in EASL abstracts two weeks ago, and opened up 6% in today. Thyroid receptor antagonists have been associated with bone and cardiovascular safety issues, so hints that VK2809 could maintain its efficacy even at low doses are encouraging. Some in the sellside have suggested that VK2809 is starting to look like a best-in-class compound.

Although the 5mg daily and 10mg every other day doses would lead to a similar exposure to VK2809, the 5mg daily dose would produce lower peak levels of the drug, so could be safer.

Speaking at a poster presentation at EASL, Brian Lian, Viking’s chief executive, told Vantage that the company wanted to take the dosage even lower in phase IIb; a study is slated to start in the second half of the year.

“There are no obvious reasons to go higher than 5mg,” he said. He would not disclose how low the company might go, but suggested that 2.5mg was not an unreasonable assumption.

He speculated that a lower dose could mean weaker efficacy on plasma markers like LDL cholesterol, but he expects measures like liver fat reduction to hold up. 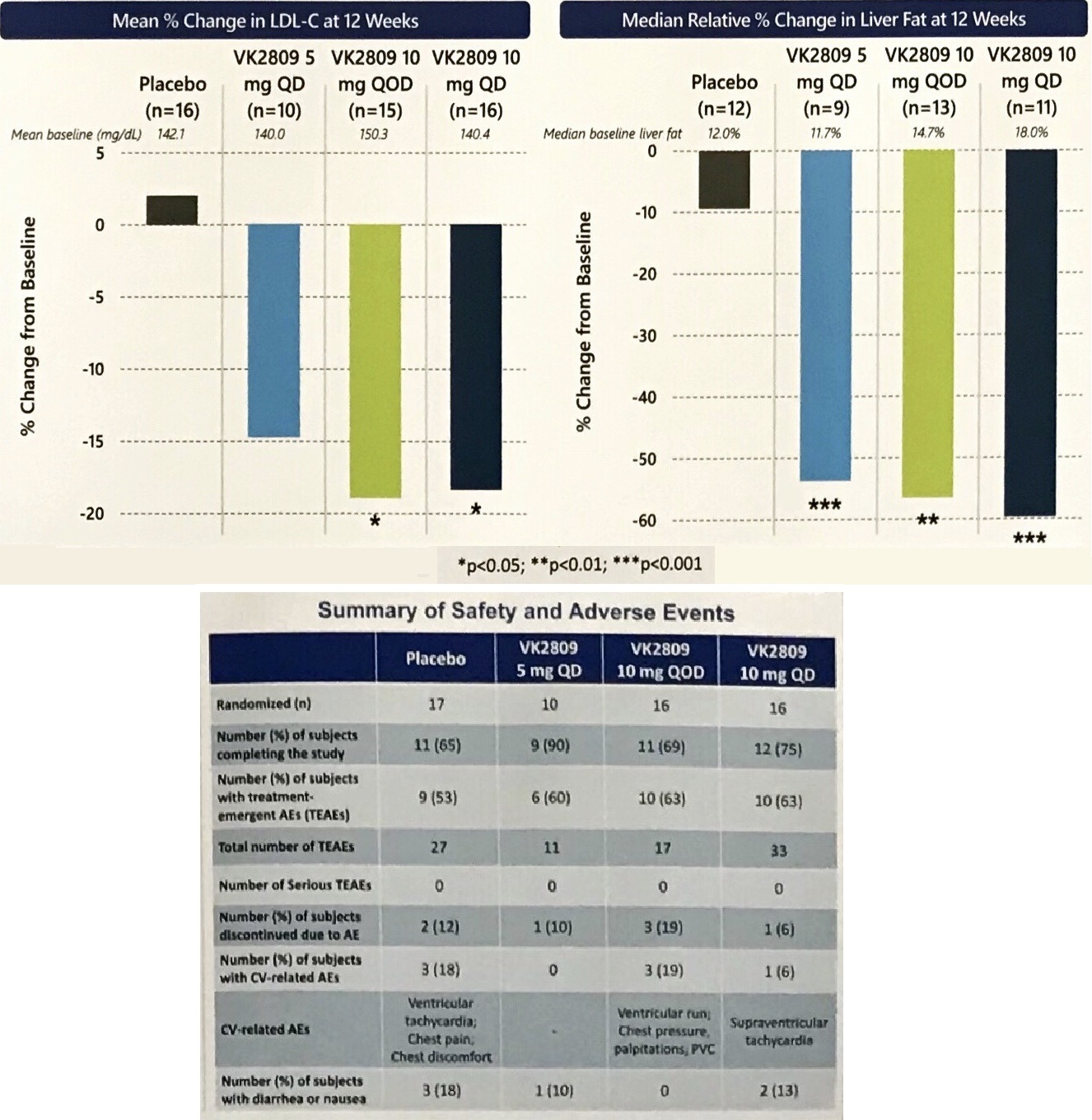 Mr Lian said that Viking was very pleased with the safety readings from the phase II study, which threw up little of concern. 59 patients with non-alcoholic fatty liver disease and high cholesterol were recruited; the trial will have included some Nash patients, he said, though because they were not biopsied firm numbers could not be confirmed.

This will be the focus of the phase IIb study, which will recruit biopsy-confirmed Nash patients; the company has previously said this would enrol 150 patients at a minimum, and would probably last for 12 months. It will select for patients with stage 2 and 3 fibrosis, with a capped number of stage 1 subjects.

Results from this study will be required as a more definitive confirmation of VK2809’s profile, which is being held up against MGL-3196, a similar compound being developed by Madrigal (AASLD 2018 – Viking lands blow in early Nash skirmish, 13 November 2018).

Madrigal is substantially further ahead here, having recently started a large, 2,000-patient phase III trial. But these new data from Viking show that this is far from a one-horse race.

NGM’s Nash data delivers, but not quite enough

Investors toast Galmed Nash results, but what will the FDA say?