An analysis of stock market movers during the period of this year’s Esmo congress gives biotech watchers little cause for happiness.

This year’s instalment of Europe’s largest oncology-focused medical congress was another big pharma affair, with the battle between Glaxosmithkline and Astrazeneca/Merck & Co’s Parp inhibitors dominating the agenda. The job for many biotech investors was to figure out the read-across to their favourite stocks.

A case in point was Mirati, which fell 17% on Amgen’s disappointing AMG 510 data, marking a pause in investors’ love affair with Kras targeting. True, the congress coincided with a tough trading period as a whole, but it is incredible that there was only one biotech winner, Seattle Genetics, whose market cap gained a remarkable $2bn over the weekend.

This analysis compares the share prices of Esmo-relevant biopharma companies at market close last Thursday, a day before the most important abstracts were unveiled, and close of play yesterday, formally the meeting’s last day.

It might seem strange that Seattle surged on remission rate data in a phase I bladder cancer trial for enfortumab vedotin, a project already filed for accelerated approval, and one that has generated survival data in a highly impressive though uncontrolled phase II trial, EV-201.

But the filing is for second-line use, whereas Seattle’s Esmo data came from the front-line cohort of EV-103, a study combining the nectin-4 inhibitor with Keytruda. In the 45 evaluable PD-L1-positive and negative subjects the confirmed overall remission rate was 71%, with six complete remissions. 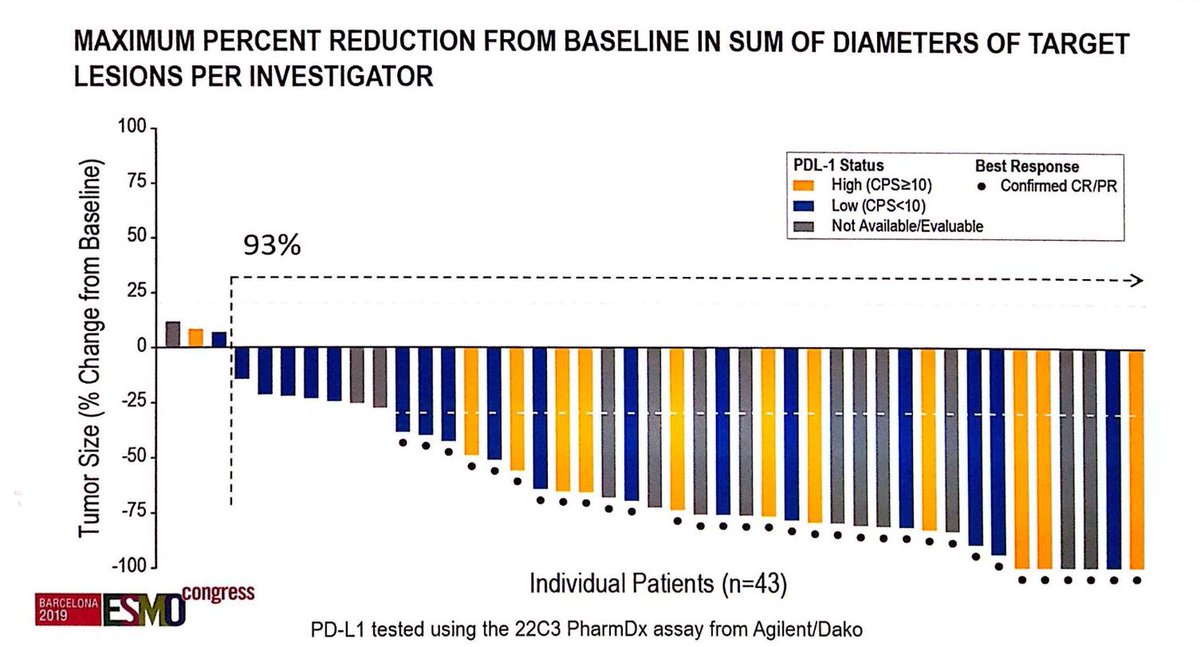 The potential of immunotherapy in platinum-eligible non-PD-L1 expressing bladder cancer has been thrown into doubt by Roche’s Imvigor-130 trial, from which interim overall survival curves were released for the first time at Esmo. The hint from EV-103 is that checkpoint blockade combined with enfortumab could be the answer.

Seattle was also helped by remission data in colorectal cancer in a trial of tucatinib, acquired through the $614m buyout of Cascadian Therapeutics. The only other significant riser was Hutchison China Meditech, presenting PFS data with surufatinib/sulfatinib in neuroendocrine tumours, though the period also coincided with an offering of stock by its holding company.

Away from big pharma’s immunotherapy trials, targeted treatments like surufatinib had a strong Esmo presence, but biotech came away empty-handed. Deciphera revealed a remarkable PFS advantage for ripretinib in the phase III Invictus trial, while Turning Point presented impressive response rates backing reprotrectinib in Ros1-positive cancers, but both stocks barely crept up.

At the opposite end of the scale Mirati crashed 17%, notwithstanding Leerink analysts playing up AMG 510’s disappointing 8% remission rate in colorectal cancer as “opening the door for Mirati to best”. Mirati had tended to trade up on previous reports of Amgen’s data – positive or negative – but the trick did not work this time around.

G1 Therapeutics was the biggest loser, as an Esmo presenter rubbished trilaciclib’s supposed survival benefit in breast cancer. And Immunomedics fell 12%, owing more to a further delay relating to sacituzumab’s complete response letter in breast cancer than to its admittedly positive result in bladder cancer.

As for the big story of Esmo – the three-way battle of Parp inhibitors – this was probably won by Lynparza, thanks to the cannily designed Profound study in prostate cancer, though in the ovarian setting Zejula might have the strongest dataset, vindicating Glaxosmithkline’s $5.1bn purchase of its maker, Tesaro.

Though Clovis was unmoved its Parp, Rubraca, also has an intriguing prostate cancer dataset. The worry is that this is too little, too late for the heavily indebted biotech.

A collection of all the Vantage stories from the Esmo 2019 can be found here. Next year’s congress takes place in Madrid on September 18-22.