Roche’s Imvigor-130 study supports Tecentriq’s continued use in urothelial bladder cancer – up to a point.

There will be some relief today about the use of Tecentriq in urothelial bladder cancer. The message from the Esmo congress seems to be that, as long as patients are willing and able to tolerate chemotherapy, they can be given the Roche drug combined with chemo first line, irrespective of their PD-L1 status.

However, doctors treating low PD-L1 expressers ineligible for any chemo will struggle to come to terms with the results of company's Imvigor-130 trial, unveiled at an Esmo presidential session today. In the second line, meanwhile, Immunomedics revealed for the first time the results of the Trophy-U-01 study of its antibody-drug conjugate sacituzumab govitecan.

It seems unlikely that sacituzumab, which targets the Trop-2 antigen and has separately been delayed by a complete response letter in breast cancer, will threaten Tecentriq. The Roche drug is available as monotherapy under US accelerated approval for both first and second-line bladder cancer.

However, Tecentriq’s second-line use was previously called into question by the failure of the potentially confirmatory Imvigor-211 study. And the US FDA has recommended that front-line Tecentriq monotherapy in patients eligible for non-cisplatin chemo be limited to those expressing PD-L1 at ≥5%, after analysis of the Imvigor-130 trial suggested that low PD-L1 expressers did worse on Tecentriq than on chemo.

This analysis has only now been revealed: Imvigor-130’s Tecentriq monotherapy subjects who expressed PD-L1 at <5% were 7% more likely to die than chemo recipients, with this effect especially pronounced within the first 10 months after treatment. 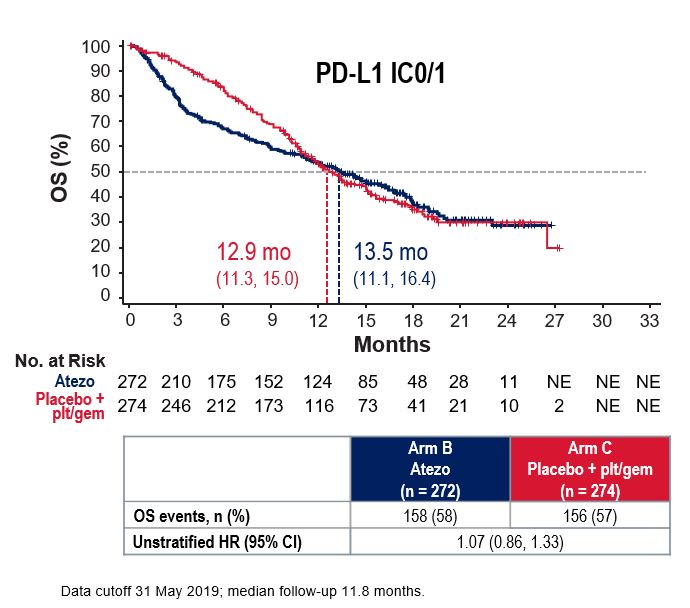 Imvigor-130 had tested Tecentriq with or without chemo, versus chemo alone, in 1,213 front-line bladder cancer subjects. It involved a three-way co-primary analysis where statistical power was first split to look at OS and PFS of the chemo combo versus chemo; then, in sequential fashion, OS of the monotherapy arm was compared against chemo.

In PFS terms Tecentriq plus chemo scored an easy win, showing an 18% reduction in risk of progression (p=0.007). But, while numerically the combo beat chemo on OS, this yielded a one-sided p value of 0.027, missing a specified 0.007 interim threshold. This having failed, the OS analysis of Tecentriq monotherapy was no longer capable of showing significance, and thus became exploratory.

But it bears pointing out all the same: there was a numerical OS benefit favouring Tecentriq monotherapy at median, but the hazard ratio came out at 1.02, meaning that at any point in the trial Tecentriq subjects were 2% more likely to die than those receiving chemo – an effect clearly driven by underperformance of the PD-L1 <5% group.

Sacituzumab, meanwhile, is being watched by increasingly desperate followers of Immunomedics, having hit problems relating to manufacturing, culminating in January’s US CRL (US regulator wipes the smile off Immunomedics’ face, January 18, 2019).

Results of the Trophy-U-01 trial, presented in an Esmo late-breaker on Saturday, could provide some solace. The study, in 35 evaluable post-checkpoint blockade subjects, yielded a 29% overall response rate that included two complete remissions, though two of the remaining partial responses were as yet unconfirmed. Safety was said to be consistent with prior data.

Nevertheless, sacituzumab’s biggest stumbling block will be Seattle Genetics’ enfortumab vedotin, whose EV-201 study yielded a stunning 44% remission rate, and was used for an accelerated US filing earlier this month.

Seattle looks set to have the last laugh, having remarkably tried and failed to license sacituzumab from Immunomedics back in 2017.