Anyone thinking that concerns over Amgen’s Lumakras, raised when the drug’s late-breaking abstract went live last night, were over was in for a second surprise today. The presentation just given at Esmo heaps more worries on the Kras inhibitor, approved for lung cancer on an accelerated basis.

The biggest concerns from the potentially confirmatory Codebreak-200 trial are a disappointing median progression-free survival benefit, overall survival favouring docetaxel, and two cases of drug-induced liver injury on top of the liver enzyme elevations already disclosed. Individually each might be allayed, but taken together they boost Mirati, whose investors will see fresh doubts about Lumakras’s full approvability.

Full lung cancer approval will be down to the FDA, which will now scrutinise Codebreak-200. Mirati’s rival Kras inhibitor adagrasib faces a December 14 Pdufa date, and depending on timelines full Lumakras approval risks jeopardising Mirati’s chances of obtaining an accelerated green light for adagrasib.

For Codebreak-200’s lead investigator, Dr Melisa Johnson from the Sarah Cannon Research Institute at Tennessee Oncology, this was a highly positive study. “It supports [Lumakras] as a new second-line standard for patients with Kras G12C NSCLC,” she told an Esmo press conference this morning.

Others were not so sure. Another lung cancer doctor, City of Hope’s Dr Jack West, tweeted in light of the abstract that hepatotoxicity concerns and lack of an OS benefit were disappointing given the cost difference between Lumakras and docetaxel, $18,000 versus about $2,000 a month respectively. He also questioned whether docetaxel represented a real comparator, and said few doctors gave this chemotherapy with enthusiasm.

It is noteworthy that Esmo, having first gone out of its way to let Amgen to present Codebreak-200 as a late-breaker, then allowed an abstract to be published that omitted vital aspects of the data and painted the result in a better light than became evident at today’s full presentation.

Perhaps the biggest red flag is liver toxicity. The abstract had revealed a slightly higher rate of grade 3 or higher ALT elevation versus the earlier Codebreak-100 trial, but today it was disclosed that six patients quit treatment because of this, and another two discontinued owing to drug-induced liver injury.

How close is Hy’s law, the rule suggesting that patients are at high risk of fatal drug-induced liver injury, to being triggered, Evaluate Vantage asked during the press conference? “Not close,” Dr Johnson replied. “The safety signal was pretty similar between [Codebreak-200 and Codebreak-100]. It was amenable to dose reduction.”

It also cannot be denied that docetaxel is fairly toxic, explaining doctors’ reluctance to use it and desire to find something better. The rates of all severe and serious toxicities in Codebreak-200 were higher for the chemo than for Lumakras, though liver enzyme elevation is not an issue for docetaxel. 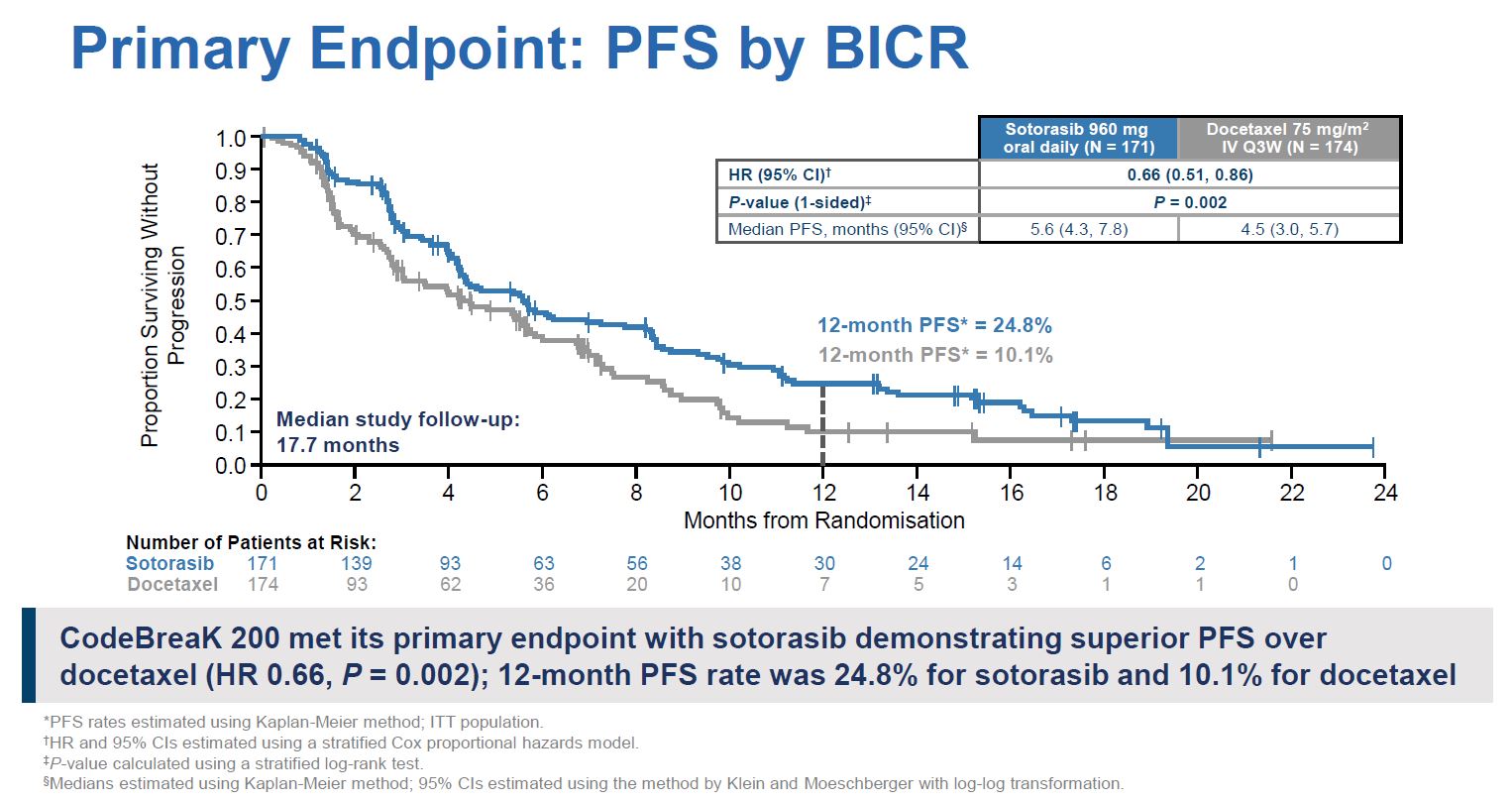 A second key aspect of the Codebreak-200 data that had been left out of the abstract was the median PFS benefit, the trial’s primary endpoint. Instead the abstract touted a 12-month landmark analysis – in hindsight the most flattering part of the survival curves – an unusual move given that the survival analysis was mature.

Today it was revealed that Lumakras extended median PFS by just over a month. Hopes were that the Amgen drug would give mPFS of at least six months, yielding a delta of two months or more, considering a benefit of 6.3 months seen in Codebreak-100. This decline in the data is typical of  the move from a single-arm to a randomised phase 3 study.

On a webinar previewing Codebreak-200 yesterday Evercore ISI analysts had opined that a one-month delta, with docetaxel around 4.5 months, would “start to look like a disappointing result”. In a press release issued last night Amgen spoke about “the totality of evidence” supporting Lumakras as a treatment option.

Dr Johnson argued that PFS was a meaningful primary endpoint, and insisted that the curves were robust, separating early and remaining separated.

No such luck for the gold standard of OS, however, which in the Codebreak-200 abstract was said to be not statistically different between Lumakras and docetaxel.

Today the failure to hit this key secondary endpoint was quantified: not only was there no numerical benefit for Lumakras, but at median the survival analysis favoured docetaxel by nearly a month. Across the whole study the hazard ratio was above 1.0, meaning that patients on Lumakras were at numerically greater risk of death than those taking docetaxel.

Of course there are caveats here, the biggest of which is patient crossover: Dr Johnson said 34% of control cohort patients switched to a Kras G12C inhibitor after progressing on docetaxel. This will clearly have confounded the OS analysis, though some might say that it just undermines the case for Lumakras to be given before docetaxel.

It must also be stressed that Codebreak-200 suffered from underpowering; it had originally been envisaged as a 650-patient trial, but an FDA-requested February 2021 protocol amendment implemented in the wake of Amgen’s Codebreak-100 data halved the targeted recruitment and allowed crossover.

Whether Lumakras consolidates its status as a second-line treatment for Kras-mutated NSCLC now depends on the FDA upholding the accelerated approval and formalising it, and on a real-world balance of other factors including toxicity profiles and cost.

This is an updated version of a story published earlier. 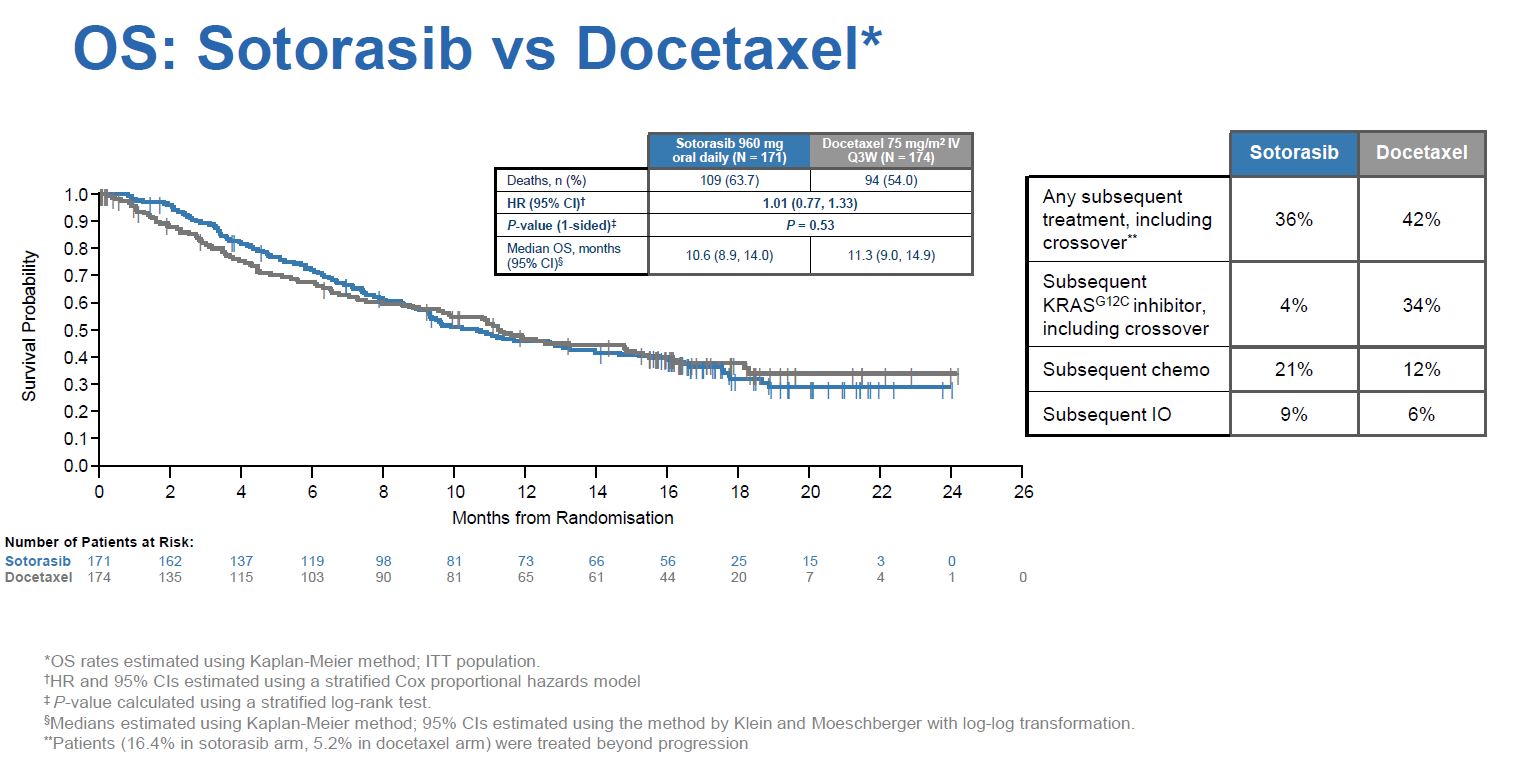