Two conference presentations, two stock market selloffs. The sorry few days ALX Oncology has suffered – driven first by last week’s underwhelming Ash abstract and then yesterday by an SITC dataset in solid tumours – point to something of a deflation of the bubble around CD47 inhibition.

Coincidentally, a second small CD47 player, Shattuck Labs, fell 29% yesterday on the canning by Takeda of a key research collaboration. True, this did not concern Shattuck’s anti-CD47 asset specifically, but all the same it is hard to escape the impression that the big deal making here has already been done, and that the most promising CD47 assets are already in the hands of big biopharma.

Most investors will need no reminder of the state of play: in March 2020 Gilead paid $4.9bn to buy Forty Seven and its anti-CD47 MAb magrolimab, and then three months ago Pfizer took out Trillium, with its anti-SIRPα-Fc fusion proteins TTI-621 and TTI-622, for $2.3bn. A third important anti-SIRPα MAb, CC-95251, was originated by Celgene and is now in the hands of Bristol Myers Squibb.

ALX’s shot at the CD47/SIRPα axis is evorpacept, a high-affinity CD47-blocking fusion protein with an inactive Fc region. But an Ash abstract unveiled last Thursday showed remissions in the myelodysplastic syndrome Aspen-02 study that lagged magrolimab’s on a cross-trial basis, and ALX fell 15%.

Yesterday the stock took a further 22% battering as the SITC abstracts went live, and data from evorpacept’s phase 1 Aspen-01 trial featured. The most disappointing aspect of this dataset was a front-line head and neck cancer cohort, given evorpacept plus Keytruda and chemo, where efficacy looked no better than Keytruda/chemo alone.

The issue is relevant because, apart from Trillium, none of the other CD47 players was seeing significant monotherapy activity, and thus most had resigned themselves to combinations. SITC data from a late-line gastric cancer cohort of Aspen-01 look better, but as this combines evorpacept with Herceptin, Cyramza and paclitaxel ALX’s contribution is hard to parse.

In first-line head and neck cancer the SITC poster revealed a 38% ORR in 13 subjects, virtually identical to the 36% Keytruda plus chemo had scored in Keynote-048. Worse, ALX said on an investor call yesterday that it had amended the phase 2 Aspen-03 and 04 head and neck trials: these will now have ORR and 12-month overall survival primaries, rather than a sole ORR endpoint.

This is probably a wise move given the disappointment of Aspen-01, but it likely delays evorpacept's filing timeframe, and raises questions about what might be an approvable result. 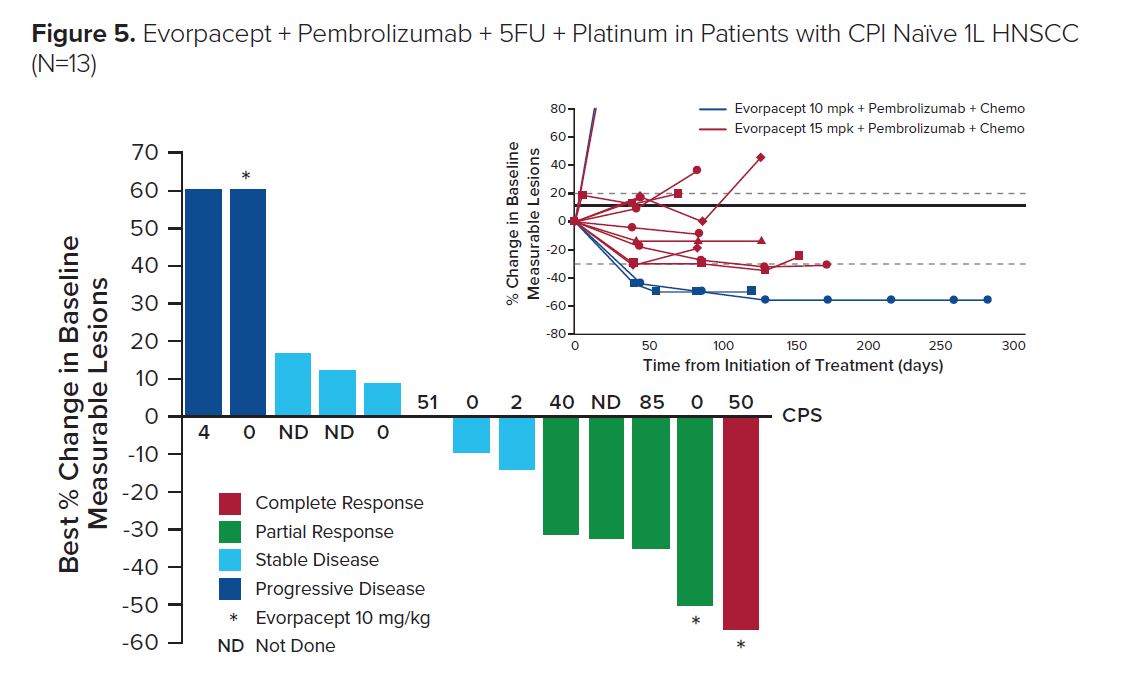 Shattuck’s SIRPα-Fc-CD40L fusion protein SL-172154 is also in phase 1 in head and neck cancer, as well as in a phase 1 ovarian cancer trial, but these only got under way recently. More pressing for this company is yesterday’s move by Takeda to scrap a 2017 deal that had led to SL-279252, a PD1-Fc-OX40L project, entering phase 1.

And investors eying the CD47 space are still awaiting an update from Gilead’s magrolimab/azacytidine combo in myelodysplastic syndromes from a phase 1 study similar to Aspen-02. This will not feature at Ash, which instead has an abstract on a separate trial in AML, in which magrolimab is being combined with azacytidine and Venclexta.

Also at Ash, investors’ attention will no doubt be drawn to clinical presentations on lemzoparlimab, an asset Abbvie licensed from I-Mab for $200m last year, and on what might be the first clinical data for Bristol’s Celgene-derived CC-95251.

In 2018 Celgene had canned a separate anti-CD47 MAb, CC-90002, but it is clear that ALX still faces considerable big company competition.

Trillium gets a buyout while it's down