Astrazeneca is not exactly known for its prowess in genomic medicines. But the company has been quietly working away in this space for some time, and this month it beefed up its efforts with the acquisition of Logicbio for just $68m.

Logicbio has a novel in vivo gene-editing technology called GeneRide that, it says, works without making cuts to the genome – unlike Crispr/Cas9, for example. The group says that this feature, along with precise targeting to the correct location in the genome, should lead to improved safety versus other gene-editing methods.

This will soon be up to Astra to prove. If GeneRide has anything like the potential that Logicbio sees, the big pharma could look like a very canny dealmaker indeed. Logicbio's investors did not seem to share this excitement: before the buyout was announced the group's stock was trading below $1.

This meant that the Astra deal was struck at a hefty 667% takeout premium, a number that belied the small takeout tag.

“I don't know any CEO whose company gets acquired and says: ‘It’s a very fair price.’ You always want more, I guess. But if you take everything into account – the company's ability to raise money, and the market … we feel it’s the best alternative,” the group’s chief executive, Fred Chereau, admits to Evaluate Vantage.

As part of the deal, Astra will get its hands on a clinical-stage asset, albeit one that has already had a relatively turbulent development path. LB-001, which is being studied for methylmalonic acidaemia, was put on FDA clinical hold in February after two cases of thrombotic microangiopathy (TMA) were seen in two of the four children treated in the phase 1/2 Sunrise trial.

The hold was lifted in May, and Mr Chereau reckons that this side effect can be managed with improved monitoring – and notes that it has been seen with other gene therapies, including Novartis’s approved SMA treatment Zolgensma.

Mr Chereau puts the TMA cases down to an immune response to the LK03 AAV capsid used in LB-001. It is notable that Logicbio is also working on next-generation AAV capsids that, he says, could have better properties versus the first generation: “Higher transduction, higher expression, and potentially a lower immune profile.”

Still, the group’s new capsid, known as sL65, looks unlikely to be incorporated into LB-001. Instead, it is being used in two Canbridge-partnered projects that are still preclinical, for Fabry and Pompe diseases.

In any case, GeneRide looks like the main draw. The technology promises advantages over Crispr/Cas9, currently the most commonly used gene-editing method.

Logicbio’s platform comprises the therapeutic gene, two homology arms, which act like a GPS system, and the 2A peptide, which is essentially a biomarker for gene integration.

“The homology arms are built to mirror the specific sequence in the genome,” Mr Chereau explains. Once there, the technology harnesses a natural DNA repair process, homology directed repair, to “open up the genome and integrate the gene of interest”. 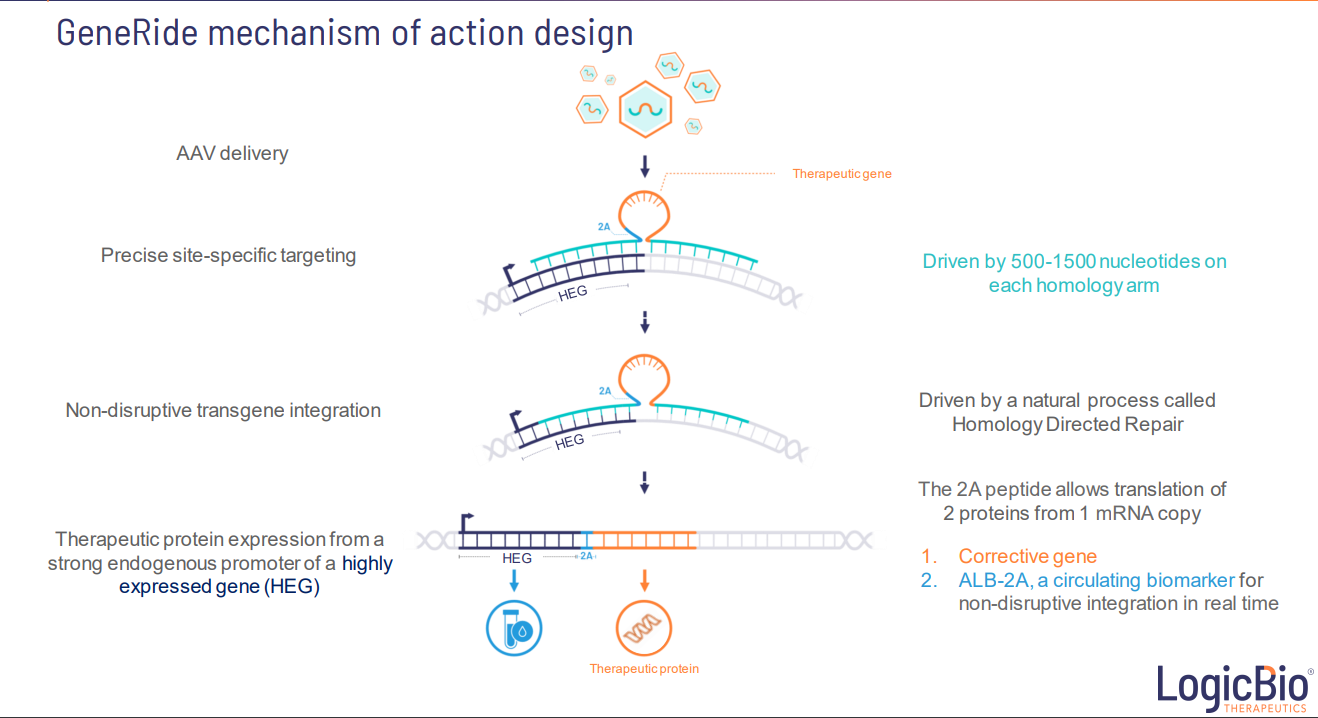 This does not involve cutting the host DNA, he adds. One worry with Crispr/Cas9 is that the double-strand breaks made in patients’ DNA could lead to chromosomal abnormalities and, ultimately, cancer.

Logicbio also hopes to avoid the potential for off-target integration, which is another concern with Crispr/Cas9. This is because the homology arms, at 500-1,500 nucleotides, are much longer than the guides used in Crispr/Cas9, which are about 20 nucleotides long.

“The longer the sequence you have to recognise in the genome, the more precise you will be,” Mr Chereau says.

Astra appears to be hedging its bets here: it already has Crispr/Cas9 work of its own, including a project in Duchenne muscular dystrophy, a spokesperson told Vantage. The group clearly has a way to go in this field, but its progress in genomic medicine is worth watching.

Looking for winners in geographic atrophy