Gamma frequency neuromodulation is the key to treating dementia, according to the MIT spinout.

As Lilly executives were reminded recently, developing drugs to treat Alzheimer’s disease is no easy task. Attempts to use devices here have met with even less success. Cognito Therapeutics believes it has a better chance with a digital therapy – a combination of light and sound that improved some measures of memory and cognition in its recent phase II trial, Overture.

“Although it is a digital therapeutic and device intervention, once we get into the brain it looks like a drug and it acts like a drug,” says Brent Vaughan, the company’s chief executive. Unfortunately Overture was by no means an unequivocal success: none of the three primary endpoints hit significance versus sham. This has not put Cognito off its plans to start a pivotal trial later this year.

Cognito’s system consists of a pair of goggles and some over-the-ear headphones, which use patterns of light and sound pulsed at a gamma frequency – between 25Hz and 140Hz. This prompts brain cells to start to fire along in synchronicity with the signal, Mr Vaughan says, and since gamma waves are a form of brain wave associated with cognition, the patient’s memory, attention and perception ought to improve.

Clinical data have been far from conclusive, however. In the Overture study 60 patients used the device for an hour a day, aided by an in-home care partner such as a family member. The trial failed to hit any of the three primary endpoints – the cognitive scales Adas-Cog14, Madcoms and CDR-SB – and in fact responses numerically favoured the sham arm on the first of these measures.

A nominally significant slower worsening was detected on the functional scale ADCS-ADL, as compared with a sham treatment. The device also caused a significantly slower shrinking of brain volume versus the sham, a finding that must again be considered exploratory. Data were presented at the AD/PD 2021 meeting earlier this month. 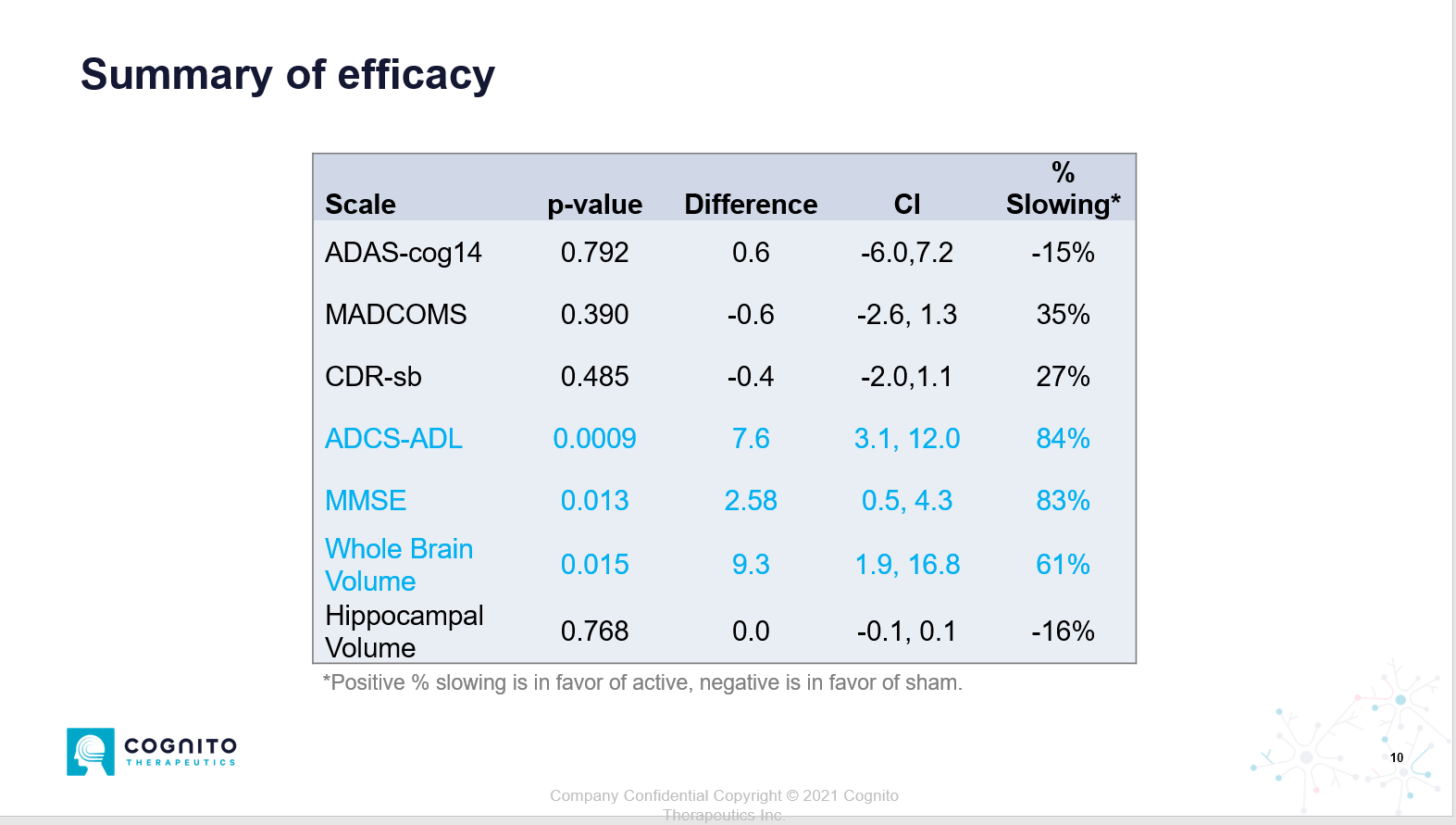 Mr Vaughan is unworried. “As a phase II study the difference between primary and secondary is quite arbitrary, frankly,” he says. He is particularly pleased with what he calls “the largest reduction in whole brain atrophy over a six-month treatment period that anyone’s ever seen”, saying “no neurologist would argue that reducing brain atrophy and volumetric loss for the whole brain isn’t key to slowing disease progression”.

Judging by the FDA’s response to the data Cognito might have some grounds for hope. The agency granted it the first ever breakthrough designation for a digital therapeutic that is intended as a first-line therapy for memory, cognition and function in Alzheimer’s.

Enrolment into the planned pivotal trial will start in the second half of this year, though size and scope of the study is still subject to discussions with the FDA.

“We want to prove to the world that it has efficacy and can be used like a drug,” Mr Vaughan says, “so we will look at a pivotal study that is similar to what you see in registrational studies on the drug side.”

The endpoints will look at memory and cognition, functional outcomes, and also physiological measures like brain atrophy and volumetric loss, he says. Patients are expected to be followed for six months, with the trial possibly yielding data in around two years.

A look at the history of device development in Alzheimer’s does not make for encouraging reading. This month results of a pilot trial showed a photobiomodulation technology developed by the French group Regenlife to be no better than placebo in improving the cognitive performance of patients with mild-to-moderate Alzheimer’s.

Regenlife’s device is called RGn530, and delivers light therapy via a helmet and abdominal panel to stimulate cells in the brain and gut. Much like Cognito, Regenlife also brushed off the failure, stating that there was a “a clear improvement trend” in a set of cognitive functions, and decided to start planning its pivotal trial.

Two years ago the Israeli company Neuronix got as far as a US adcom for its neuroAD system, which focused transcranial magnetic stimulation on the patient’s brain as they performed cognitive training tasks.

The verdict was unanimous, and not in a good way. None of the panel’s members voted that the system’s benefits outweighed its risks – hardly surprising given that the pivotal trial of the device had failed. The neuroAD system had already been approved and launched in Europe, Australia and Israel, but in the two years since the adcom’s rejection Neuronix itself seems to have been wound up.

True, neither of these devices acts in exactly the same way as Cognito’s system. But the challenges here are enormous, and the company has a hard road ahead.

Interview – Dong-A shifts sights from Korea to the US

BIO 2013 – Alkermes hopes to step out of partners’ shadows