Software can be a medical device. Can it also be a drug?

Developing drugs to treat disorders of the central nervous system is famously fraught with difficulty. Several companies, including Pear Therapeutics and Dthera, are taking a wildly different approach: digital therapeutics. These are pieces of software designed to treat disease that are regulated, prescribed and even paid for as if they were drugs.

“These things are cheaper, faster and have a higher probability of success than traditional drug development,” Corey McCann, president and chief executive officer of Pear Therapeutics, tells Vantage. This is likely why Pear and its fellows have easily attracted VC funders and development partners – but making the software pay could be trickier.

Pear is the first out of the gate, with two approvals already under its belt. Its Reset app got de novo FDA clearance in 2016 as a way to provide cognitive behavioural therapy for patients with addictions to alcohol, cannabis, cocaine or stimulants. Reset-O, a similar product for opioid addiction which must be used in combination with buprenorphine, was approved last December.

Last month the group filed a third product with the FDA. Somryst is an app designed to reduce the severity of insomnia and symptoms of depression, and Mr McCann says it is odds-on for approval after success in its pivotal trials.

The company submitted two studies in a total of 1,400 patients with chronic insomnia with comorbid depressive symptoms who were randomised to treatment with Somryst or a digital sham; the latter involved digital assessment without Somryst therapy.

Somryst is the first project known to have been submitted via the FDA’s software precertification pathway, which is aimed at getting software-based medical products to market faster by pre-evaluating the software developer itself. The agency will allow faster review of software made by companies which “have demonstrated a robust culture of quality and organisational excellence”.

Mr McCann is quick to point out that this assessment “in no way takes precedence over the safety and efficacy demonstration in a dedicated clinical trial”. 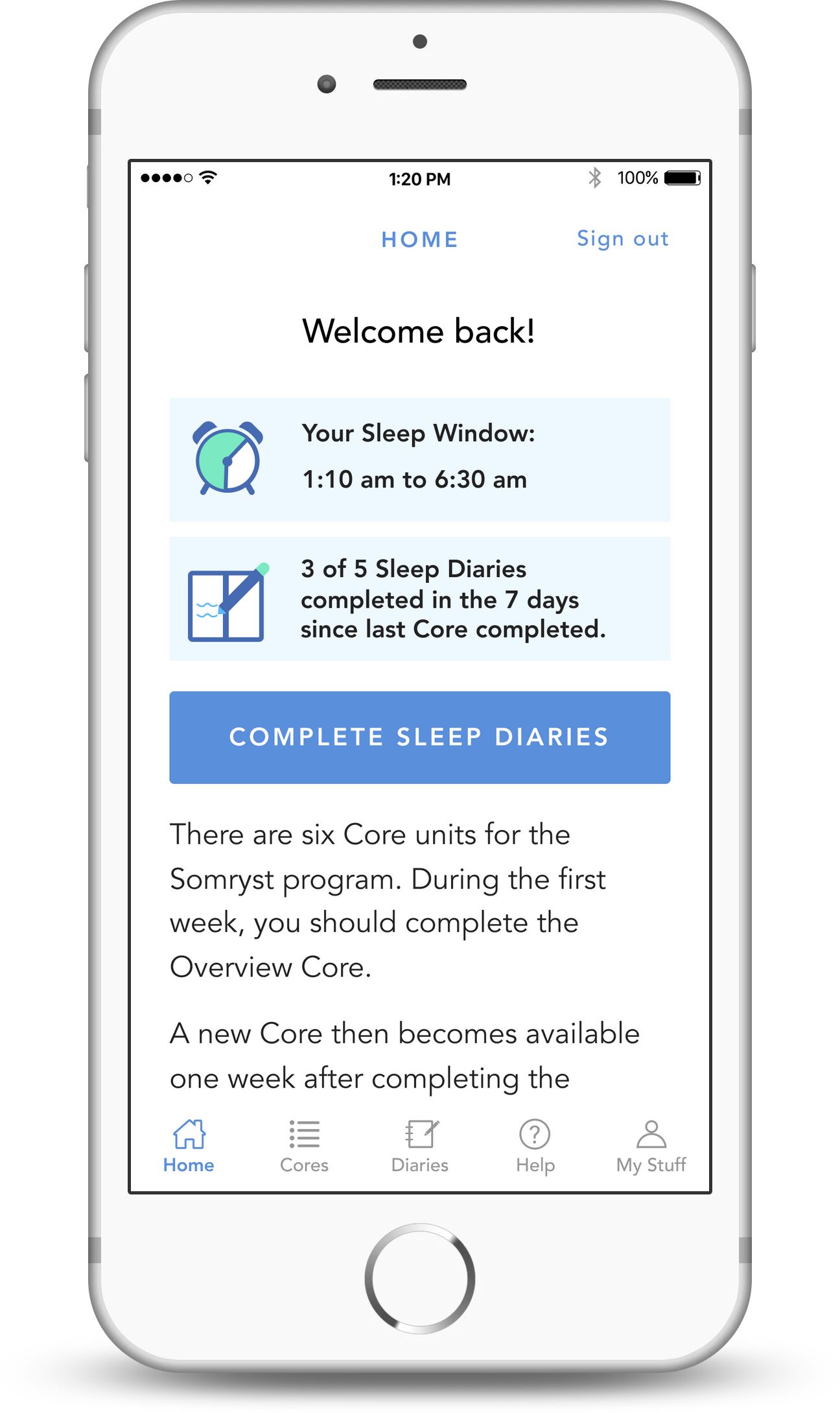 Somryst will, if approved, be another kind of first: Pear intends to market it alone. Reset and Reset-O are sold under a partnership with Novartis’s generics arm, Sandoz. Sandoz is a manufacturer of buprenorphine, an opioid addiction treatment, but Mr McCann says the two products are not sold bundled together.

Pear has also partnered a couple of its pipeline products. Pear-004, in schizophrenia, and Pear-006, in multiple sclerosis, are in development with Novartis. Data from a large, sham-controlled trial of ’004 ought to emerge late this year or in early 2020; Mr McCann describes the study as “probably one of the most rigorous clinical trials that’s ever been run with a prescription digital therapeutic”.

As with most schizophrenia drug trials, the trial’s efficacy endpoint will be change on the positive and negative syndrome scale.

“That’s the point of what we do: to apply drug-like rigour so that clinicians know what works, patients get what works and payers can ultimately trust to pay for what works. Just like the drugs in this space.”

Pear is so far the only company to have brought a digital therapeutic to market – but it is by no means the only company in this space. Akili Interactive has filed for FDA approval of AKL-T01, a computer game designed to treat ADHD, and another product, AKL-T02, is in late-stage development for cognitive dysfunction in children with autism spectrum disorder.

And Akili, like Pear, has received generous financial backing from venture investors. Akili raised $68m in a series C round last year from investors including Merck Ventures and Temasek, Singapore’s National Wealth Fund. Pear’s $64m series C, also involving Temasek with other backers including Novartis, was one of this year’s biggest (Medtech VC and the billion-dollar era, July 10, 2019).

Click Therapeutics, which makes apps for various neurological conditions and has partnered with Otsuka on the development and sale of its depression therapeutic CT-152, counts Sanofi and Hikma Pharmaceuticals among its investors.

Perhaps drug companies see the development of digital products as a way of wringing some kind of financial reward out of CNS disorders given the difficulty of developing drugs in this area.

That said, no digital group has yet generated such a return. A private company, Pear has not opted to report sales figures and Mr McCann says the group is not interested in turning a profit at this stage.

“Our mandate is to develop as many of these prescription digital therapeutics as we possibly can – our goal is really development of the space before it is profitability.”

That said, developing digital therapeutics is not always straightforward. The San Diego-based group Dthera Sciences is chasing perhaps the most elusive target of all: a way of improving outcomes in Alzheimer’s disease.

Edward Cox, chief executive of Dthera, explains that the group’s technology is a way of allowing large numbers of patients to undergo reminiscence therapy – a proven behavioural therapy for Alzheimer’s disease.

The device shows agitated patients pictures or videos of themselves and their families from earlier in their lives as a way to calm them.

The technology runs on a ruggedised tablet, which runs a second programme to scan the patients’ faces and track their emotional reactions. The software then compares those reactions to the content that is shown to maximise its effectiveness.

Dthera is planning to run a pivotal trial of the tech. But the company has not had the same kind of financial success as some of the other groups in this space. Listed on the OTCQB, its shares have lost 97% of their value since the beginning of 2018, and a 20-for-one reverse split last September did not help the company reach its goal of uplisting to the Nasdaq.

In April Dthera said it was seeking a buyer, an investor or a development partner – it does have an exclusive agreement granting Japanese development and commercialisation rights for DTHR-ALZ to an unnamed company headquartered in Japan.

Digital therapeutics is an area still in its infancy, and it will take time before it becomes clear whether other players will see the rapid regulatory success of Pear or follow in the less exalted footsteps of Dthera.

But either way, it appears that it will be some time before digital therapeutics developers are able to post a profit.

One step forward, two steps back for prescription apps

GTX Medical must go from breakthrough to break-even