Akebia confirms its place in the anaemia race

Two successful pivotal trials with vadadustat put Akebia on track to file its novel anaemia pill by year end – hot on the heels of Fibrogen.

“Clean, clear and consistent” was the message Akebia executives repeated today, as they delivered positive top-line data from the first pivotal trials of vadadustat. It is not hard to guess where those sentiments were being directed – towards Fibrogen, which has been criticised for the complexity and opaqueness of the results with its rival anaemia pill, roxadustat.

Comparing the two projects is tricky because of the usual caveats – the trials were very different, including the choice of control arm – but vadadustat’s success does seem to confirm that these oral HIF-PH inhibitors are effective and safe anaemia treatments. Assuming regulators agree, Fibrogen could be on the market next year, with Akebia not far behind.

First to the data, which come from two phase III trials conducted in patients with chronic kidney disease on dialysis. These found the project to be non-inferior to Aranesp – Amgen’s blockbuster EPO product – on both efficacy and, crucially, cardiovascular safety.

Full details are being held back for a medical conference, but the top-line data show that vadadustat comfortably cleared the non-inferiority margins set by regulators. Whether vadadustat is better at roxadustat at treating anaemia is an argument that really needs more data disclosure and, assuming these agents get to market, is a debate to preoccupy marketing teams for years to come.

On a call executives confirmed a couple of other vital points. Most of the Mace events were deaths, more of which occurred in the Aranesp control arm; and no hepatotoxicity concerns were raised, with no cases of Hy’s Law seen – this liver safety signal rocked Akebia a couple of years ago (Akebia plays spot the difference with investors, April 3, 2019).

The company now needs to repeat these encouraging results in the Pro2tect trials – two phase III trials conducted in kidney disease patients not yet on dialysis – a less sick population that is thought to represent a much bigger potential market. These results are due around mid-year. 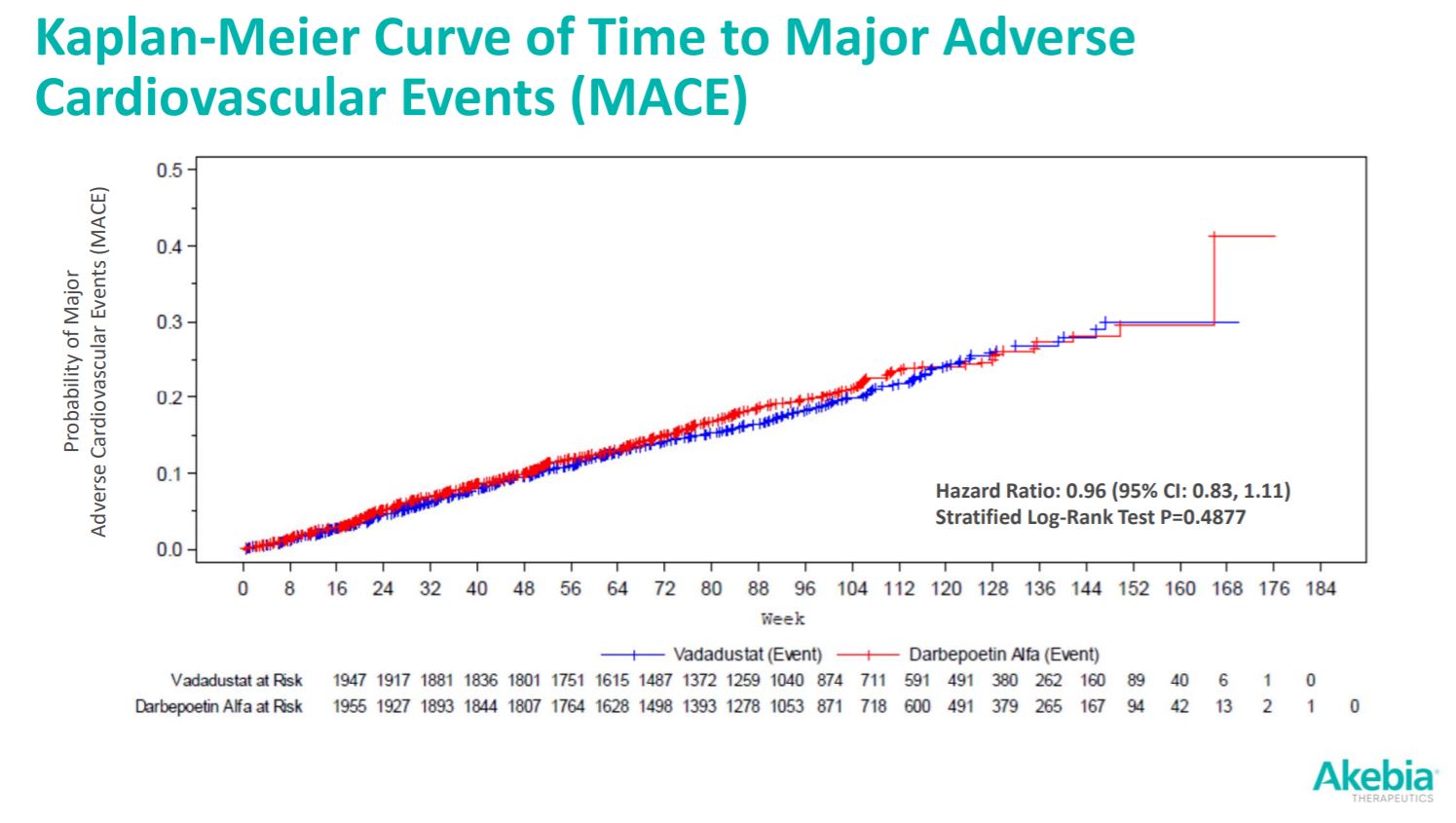 Until the FDA and EMA’s opinions on these agents start to emerge it is impossible to know whether Fibrogen’s more tortuous clinical plan will, ultimately, be its undoing. An advisory committee is likely towards the end of the year for roxadustat.

Fibrogen, which is partnered with Astrazeneca in the US, conducted seven pivotal studies primarily measuring change in haemoglobin, and pooled the data to assess cardiac safety. Akebia designed its trials with these measures as co-primary endpoints.

But the commercial arrangements for these pills are also complex. Roxadustat is already on the market in Japan, where it is sold by Astellas as Evrenzo; the Japanese company has rights in most other markets. Vadadustat is also more advanced in Japan, where Mitsubishi Tanebe has rights and has applied for marketing approval, than in Europe or the US.

However while Akebia has sold marketing rights to Otsuka in many main markets, the company also has a deal with the kidney disease specialist Vifor Pharma to sell vadadustat in dialysis centres. In striking this transaction, Akebia could well have given itself a chance to keep up with the competition, because Vifor is the proud owner of a priority review voucher.

"We will be having a conversation with Vifor but we think they will be as excited as us about this data," John Butler, Akebia chief executive, said on a call today.

Astrazeneca too is known to have a voucher, which can be used to speed up FDA review times. With vadadustat nipping at roxadustat's heels, it would not be surprising to see all parties involved give timelines a boost.