Concert squares up to Pfizer in alopecia Jak bout

Concert Pharmaceuticals reckons that new phase II data backing CTP-543 have given it the best-in-class oral Jak inhibitor for alopecia. The results, with a higher dose than was used previously, look strong – but Concert is squaring up against the might of Pfizer, which is advancing its own Jak in alopecia.

Added into the mix are doubts about CTP-543’s intellectual property, and setbacks here have depressed Concert’s stock this year. Before the markets opened today Concert's shares stood off 26% year to date, and the group still has work to do to make CTP-543 a contender.

The primary endpoint of Concert’s phase II study was the proportion of patients achieving Salt50, a 50% or greater reduction in the severity of alopecia tool (Salt), at 24 weeks. 58% of patients in the 12mg group, and 47% in the 8mg group, hit this versus 9% of placebo recipients; both active arms met statistical significance versus placebo with a p value under 0.001. 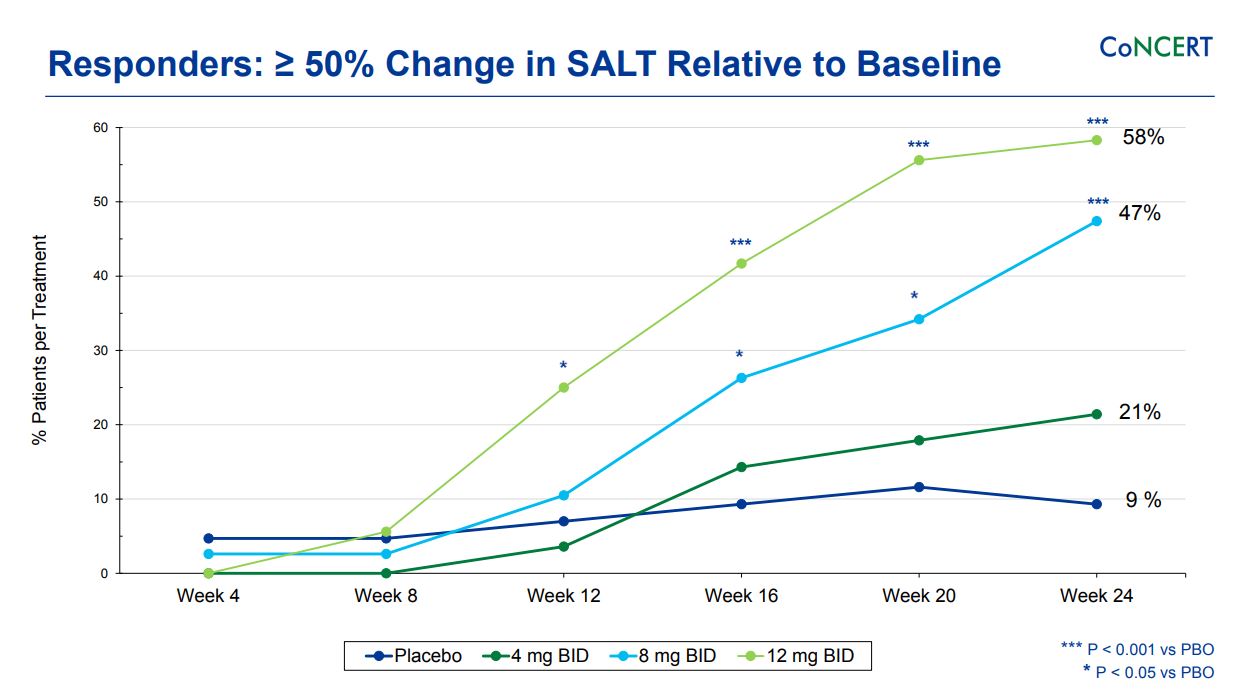 CTP-543 also appears to stack up well against Pfizer’s project, the Jak 3 inhibitor PF-06651600, on another measure, change in Salt score at week 24, although the usual caution about cross-trial comparisons applies.

Still, CTP-543 has been criticised for its slow onset of action versus PF-06651600, something that Concert has put down to the latter’s higher loading dose.

Although PF-06651600 is already in a phase II/III study, Allegro, Mr Tung contends that Concert is actually ahead of Pfizer, which is testing seven PF-06651600 regimens in Allegro; the chief exec believes that the big pharma would still need to carry out a confirmatory trial. But, even if CTP-543 makes it to market first, Pfizer would still be a fearsome competitor.

At least another rival, Aclaris Therapeutics, appears to have fallen away after reporting underwhelming data in July (Aclaris’s alopecia Jak might not be worth its Salt, July 31, 2019). The company has said it is trying to find a partner to take on the project, but hooking one seems unlikely.

However, Concert’s efforts might be for nothing if it cannot resolve its IP issues. Incyte, the maker of Jakafi, is challenging the patents on CTP-543, a deuterated version of ruxolitinib, Jakafi's active ingredient.

Concert took a blow in May when the US Patent Trial and Appeal Board invalidated its ’149 composition of matter patent, but it is appealing against the decision and is also trying to get additional IP coverage, Mr Tung said.

In the worst-case scenario CTP-543 would have five years of market exclusivity on FDA approval, and Concert could end up paying a 10% royalty to Incyte, Stifel analysts reckon.

Concert has around $130m in cash, which should be enough to fund it until the second half of 2020, but is unlikely to get it to the end of phase III. No matter how good the data with CTP-543, potential partners or investors could remain wary while the group’s patent problems overshadow.

Aclaris’s alopecia Jak might not be worth its Salt

Incyte hopes its cream can rise to the top