Several highly effective Covid-19 vaccines are available around the world – but this has not discouraged other developers from working on newer projects. Yesterday Dynavax and its partner Clover Biopharmaceuticals reported highly encouraging data on their adjuvanted protein-based candidate, SCB-2019, with 79% efficacy against the Delta variant.

And new data on the vaccines sold by the three established US players have also emerged. Pfizer is perhaps in the best position, its new booster authorisation prompting analysts to raise sales forecasts for next year. The role of new Covid-19 variants, however, has been major theme among all these more recent trials.

The novel aspect of Dynavax and Clover’s phase 2/3 Spectra trial, conducted in the Philippines, Brazil, Colombia, South Africa and Belgium, was that 100% of the coronavirus strains sequenced in the efficacy analysis – 146 out of 207 total cases – were variants.

Clover and Dynavax’s jab, known as SCB-2019, had overall efficacy of 67%, putting it within spitting distance of Astrazeneca’s Vaxzevria and J&J’s one-shot vaccine. It was 100% protective against severe disease and death. Shares in Dynavax, which makes the adjuvant used in the vaccine, closed up 26% yesterday; Beijing-based Clover is private.

More interesting is SCB-2019's efficacy against variants of concern. This was 79% for the Delta variant, which made up 38% of cases in Spectra but has since spread so dramatically that it is now responsible for over 90% of all Covid-19 infections worldwide.

SCB-2019 was also 92% effective against the Gamma variant and 59% against Mu. Collectively these three strains caused 73% of all cases identified in the study.

The Spectra data also give an insight into reinfection rates. Nearly half of the volunteers enrolled in Spectra were seropositive for Covid-19 antibodies at baseline, indicating previous infection. 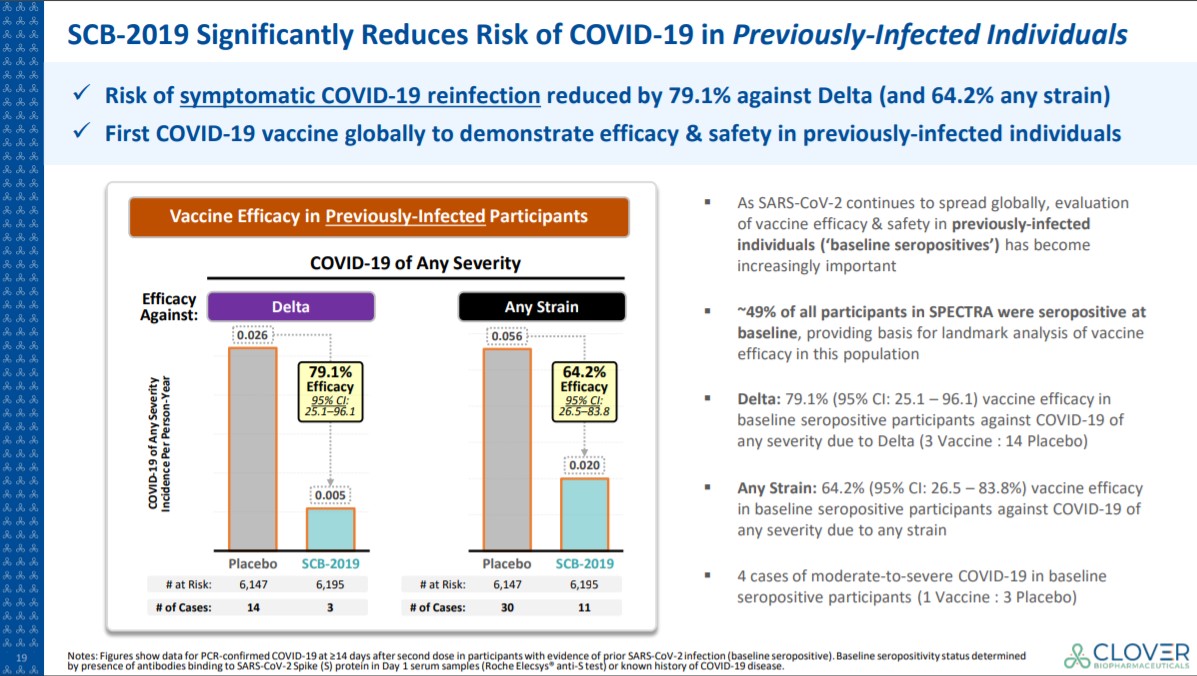 Western markets being largely saturated with vaccines, the partners are clearly aiming at developing countries. Spectra was funded by the Coalition for Epidemic Preparedness Innovations (Cepi), and the partners are hoping to make the jab available via the Covax programme. SCB-2019 requires fridge-based storage, so should be relatively easy to transport.

Global approval applications are planned for the fourth quarter, and the jab could launch by the end of the year.

Even within Western markets, though, the pace of activity is fierce. Two just-published studies, one a follow-up to the pivotal Cove trial of Moderna’s Spikevax, the other looking at both Spikevax and Pfizer/Biontech’s Comirnaty in healthcare workers, show the jabs’ effectiveness holding up well over time.

The healthcare workers study found overall vaccine efficacy waning from around 95% at two weeks after the second dose to slightly over 80% at the 14-15 weeks time point. In the Moderna follow-up trial the Covid-19 infection rate among vaccinated patients crept up, but the rate of severe cases in this group remained very low, with 98.2% efficacy at a median 5.3 months post-jab.

As to how useful the Moderna data will be is debateable; the study ended in late March 2021, before the Delta variant became widespread.

The FDA has already authorised booster Comirnaty shots for people aged 65 and older, and certain other high risk groups. SVB Leerink analysts more than doubled their 2022 revenue forecasts for Comirnaty as a result of the booster ruling, from a previous figure of $4.3bn to just over than $9bn. The bank’s sales forecasts for the jab this year already sit at a gobsmacking $39.5bn.

Elsewhere, Johnson & Johnson has its own data on long-term effectiveness. In a real-world evaluation of the as-yet unbranded one-shot vaccine – it is still known by its research code, Ad26.COV2.S – overall efficacy came in at 79% and at 81% against hospitalisations.

This was not a true clinical study, the data being culled from US insurance claims between March to late July 2021, so some caution is warranted.

This actually shows better effectiveness than the original pivotal Ensemble study, which yielded overall efficacy of 66% globally and 72% among US recipients back in January. This seems hard to explain, particularly as the Delta variant would have been a significant presence during the later period of the trial. Sequencing data were not available, J&J said, so it is unknown how many of the infections were caused by Delta.

In a separate phase 3 trial, Ensemble 2, J&J also investigated how the addition of a second shot two months after the first changed the calculation. Adding a booster upped overall efficacy to 75% globally, and 94% in the US, comparable to the rates seen with Comirnaty and Spikevax in their pivotal trials late last year.

Despite its FDA authorisation J&J’s candidate might, like that from Clover/Dynavax, do best in other territories. Evercore ISI analysts state that the company’s vaccine pricing discipline “makes a compelling case for many geographies ex-US”.

The next triggers in Covid-19 vaccine development