Though broad questions intensify, NTLA-2001 continues showing clinically what it is meant to.

Doubts about dose response and Intellia’s flat-dosing strategy have undermined what looks to be a positive dataset revealed last night for the company’s NTLA-2001. The results were keenly awaited, as they concern one of only two in vivo Crispr-edited projects in clinical trials, and the other, Editas’s EDIT-101, has disappointed.

It must be stressed, however, that the updated NTLA-2001 results, in hereditary ATTR amyloidosis, are still limited to gene knockdown data, with no indication of the therapy’s effect on underlying disease. And a separate problem looms after yesterday’s key patent ruling, which suggests that Intellia does not have rights to its Crispr technology.

The ruling, delivered by the US Patent and Trademark Office, appears to end a dispute that had rumbled for years between University of California at Berkeley and the Broad Institute, over who precisely invented Crispr. Intellia (and Crispr Therapeutics) had licensed the tech from Berkeley, but unfortunately for them the ruling has gone in favour of Broad.

This likely had a more important effect on share prices this morning than the NTLA-2001 data, as Intellia and Crispr opened off 14% and 3% respectively. Meanwhile, Editas, whose tech is licensed from Broad, was up 6%.

Though the precise repercussions are unclear the current state of play is that Broad owns the Crispr gene-editing technology, and any company that does not already have a licence to this must now obtain one.

As far as the clinical battle goes, in vivo gene editing has so far pitted Editas against Intellia, which yesterday presented findings on NTLA-2001, a Regeneron-partnered lipid nanoparticle containing mRNA encoding the Cas9 enzyme and targeting the human TTR gene. The data came from four doses in 15 subjects with the polyneuropathy subtype of the condition.

The two highest one-time infusions now disclosed, 0.7mg/kg and 1.0mg/kg, have yielded mean TTR knockdown at 28 days of 86% and 93% respectively. This came after the first two, 0.1mg/kg and 0.3mg/kg, showed activity of 52% and 87% in mid-2021, giving the first mechanistic backing to an in vivo Crispr gene therapy.

As such the company is able to claim numerical dose response, on the basis of which it has picked a flat 80mg dose, broadly equivalent to 1.0mg/kg, as the one to take onto a phase 1 expansion cohort.

But is there really a dose-response relationship? Notably Intellia did not reveal the underlying results for the three 0.7mg/kg patients, and the mean for this group looks no different from 0.3mg/kg. With the caveat of extremely small numbers of patients, 1.0mg/kg shows a slight numerical benefit over 0.3mg/kg, with both being above an 80% threshold, at the expense of a dose three times as high, plus some toxicity.

Importantly, however, the added tox does not look serious, and is mostly limited to an increase in grade 1 events. There was one grade 3 event of vomiting in a patient on 1.0mg/kg who was said to have had a history of gastroparesis.

Most important, perhaps, is that Intellia was able to demonstrate the mechanistic effect of the single NTLA-2001 dose persisting from day 28 to the two-month point. With some patients on the lowest doses now 9-12 months out from infusion the effects of NTLA-2001 show no obvious signs of waning, at least based on the limited information Intellia has provided. 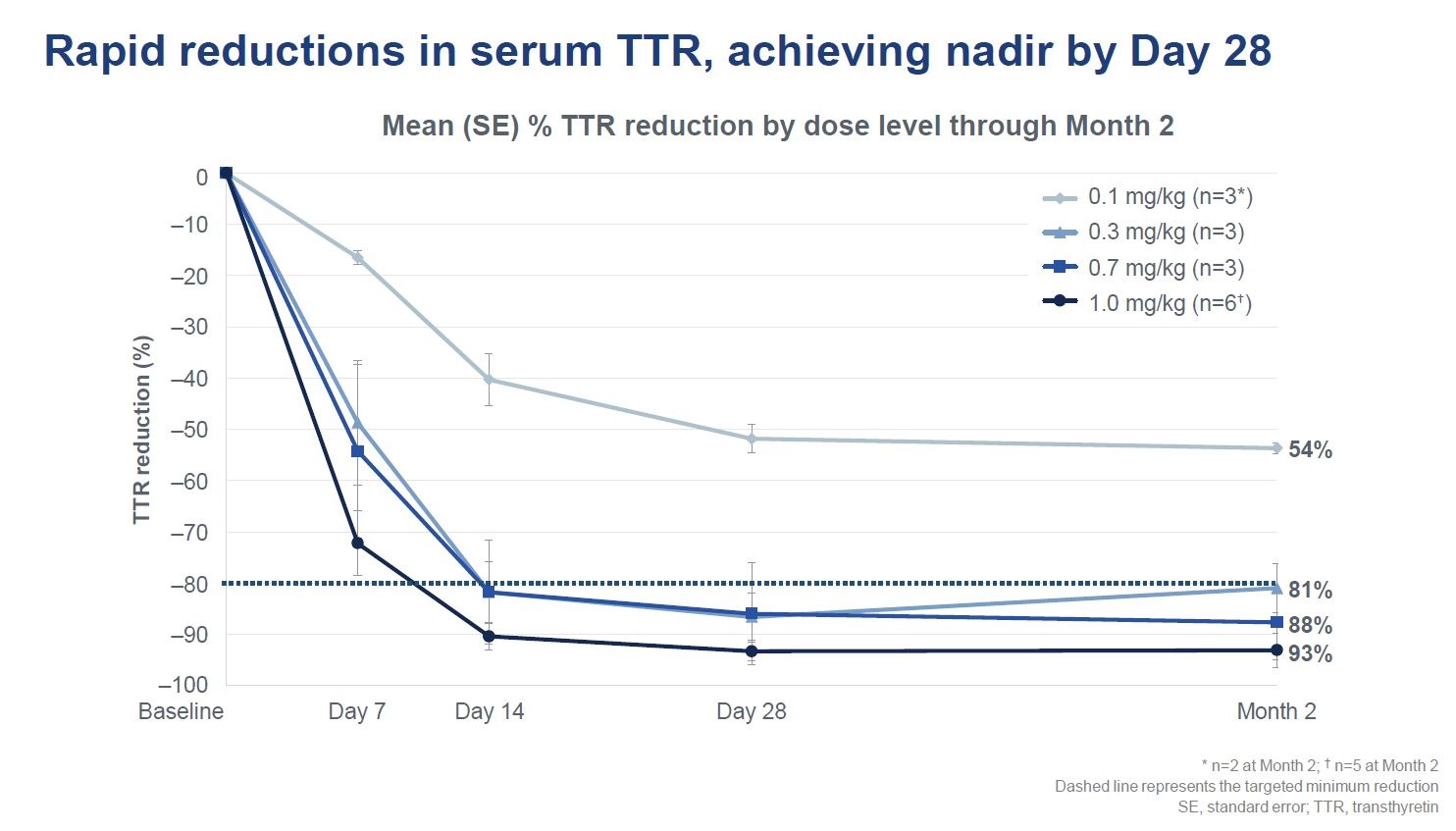 Thus the company is doing better than Editas, which last September released data on five Leber congenital amaurosis patients treated with its Crispr therapy EDIT-101. Though the data were trumpeted as positive, efficacy was hard to discern, there were toxicity signals, and Editas stock sank.

The next candidates from the nascent in vivo gene-editing space to enter the clinic might be Precision’s PBGENE-PCSK9 and Verve's VERVE-101, both of which target PCSK9 and might see INDs filed this year in familial hypercholesterolaemia.

For Intellia’s part, the next stage will be the flat-dosing cohort in polyneuropathy ATTR amyloidosis, and data from dose escalation in the cardiomyopathy subtype of the disease. Pivotal development will test NTLA-2001 in both forms, with an initial focus on the cardiomyopathy manifestations.

Intellia’s next in vivo project is NTLA-2002 for hereditary angioedema. Though the Broad patent will cast a long shadow the latest data might provide validation for this, too.

Zinc fingers get the thumbs down

Another step backwards for Editas