In the wake of a clinical trial failure Marinus plays down oral ganaxolone, but investors are unimpressed.

Despite Marinus’s best efforts there is no disguising the disappointment at the performance of oral ganaxolone in the group’s postpartum depression study Magnolia. While the company attempted a quick pivot back to the project’s IV form, and touted additional future ganaxolone uses, its stock crashed 60% this morning.

Marinus’s investment case had centred on ganaxolone becoming an oral competitor to Sage Therapeutics’ now approved IV postpartum depression drug Zulresso. IV ganaxolone cuts little ice with investors, and failure of the oral form has handed an easy win to Sage, which in SAGE-217 has a promising oral project of its own.

SAGE-217 had already dealt Marinus a blow when it yielded a surprisingly strong result in its phase III Robin trial in postpartum depression (JP Morgan 2019 – development shortcuts pay off for Sage, January 8, 2019). This ratcheted up the pressure, and meant that only a knockout result with oral ganaxolone would do.

As it is investors today pretty much wrote off the chances of oral ganaxolone, and Marinus quietly shifted its ambitions to develop a non-hospital postpartum depression drug to the back burner.

At issue is the two-part, placebo-controlled Magnolia study, which first treated 58 subjects with rising IV doses, and then recruited 33 who were given IV ganaxolone by six-hour infusion followed by 900mg of the oral form once daily. The trial’s key secondary efficacy endpoint was change in HAM-D17 scores at 28 days.

Today Marinus revealed that, though the comparison versus placebo yielded impressive differences at six and 24 hours, by day 28 any benefit had been wiped out. This came on top of December’s data from part one of Magnolia, which were largely viewed as inconclusive.

Accordingly, Marinus played up the potential of treating hospitalised patients, saying these amounted to 10-20% of the severe postpartum depression population. And it set its sights on competing against not SAGE-217 but Zulresso, stating that IV ganaxolone could have the benefit of a faster six-hour onset and a different safety profile.

It attempted to blame the efficacy failure on subjects' non-compliance, arguing that in the per protocol population in part two of Magnolia there was a 2.6-point improvement in 28-day HAM-D17 versus placebo, within the US FDA’s definition of a 2.5-point benefit being clinically meaningful. 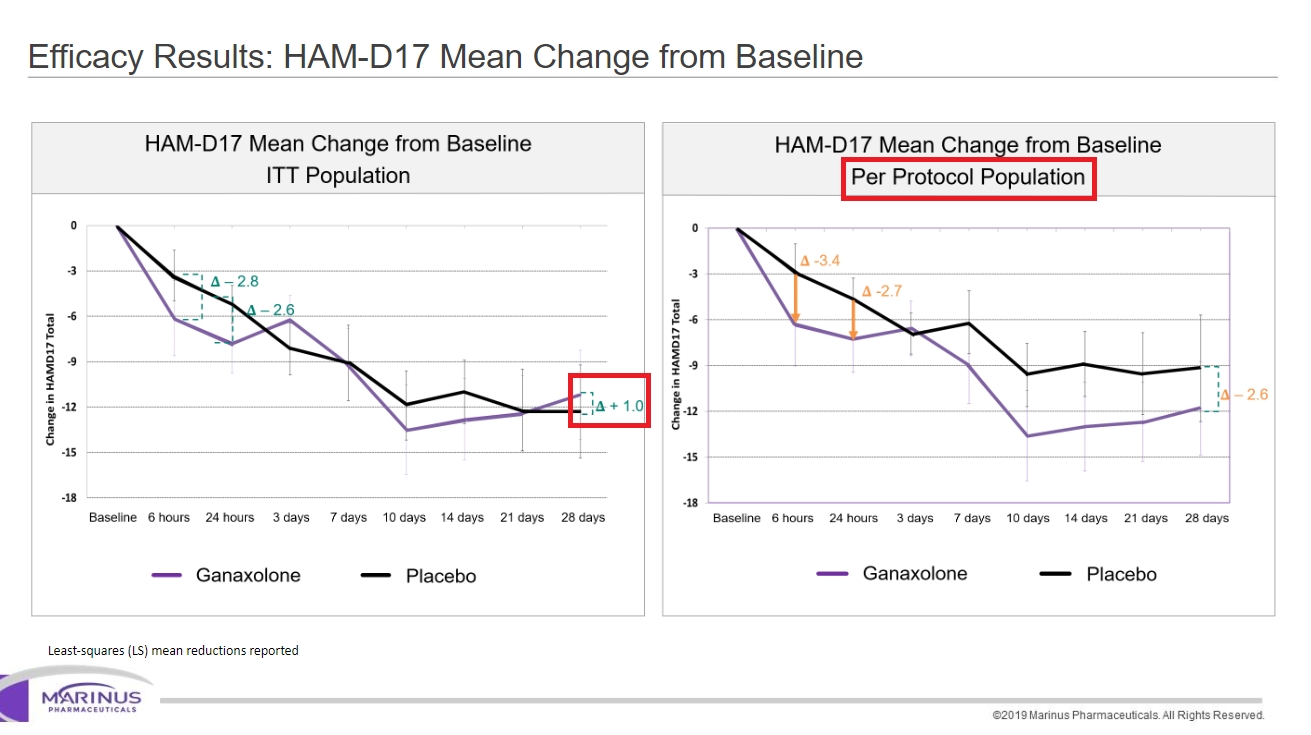 However, Marinus admitted that oral data did not meet its expectations, and told an analyst call: “The path forward for ganaxolone in depressive disorders will likely be as a 48-hour infusion.”

One problem might be that the oral dose was too low, it suggested, claiming that higher doses might hold promise as an adjuvant for IV ganaxolone. Still, no further work on oral ganaxolone will now be done without a partner, which might also be interested in additional uses like treatment-resistant depression.

True, despite the strength of Sage’s data SAGE-217 is no dead-cert in postpartum depression. The risk of syncope or loss of consciousness weighs heavy on Sage’s chances, and Marinus was quick to highlight that neither IV nor oral ganaxolone threw up any of these adverse events in Magnolia.

But Marinus has cash in the bank to last for just over 12 months, it has no chief executive at present, and it can only offer the promise of a fuller update by the year end. This, combined with the Magnolia data, does not make for a great bargaining position.

Clinical developments over the Christmas period