As semaglutide looks set to move into pivotal trials in Nash, Novo Nordisk lays out hopes for longer-term benefits.

Encouraging mid-stage results from semaglutide in Nash were a big focus at Novo Nordisk’s quarterly results today, and the diabetes giant looks to be gearing up for a push into phase III.

This is despite the GLP-1 agonist failing to hit the key secondary endpoint of the study, looking at fibrosis resolution; Novo seems to believe that semaglutide could improve this liver scarring over longer periods. Still, a convincing hit on the primary Nash resolution endpoint sets the drug up as a formidable competitor to other projects nearing crucial readouts, Genfit’s elafibranor in particular.

Elafibranor’s phase III Resolve-It trial, due to report in the coming weeks, is expected to use the proportion of patients achieving Nash resolution without worsening of fibrosis at 72 weeks for its primary endpoint – the same as the Novo study that was detailed today. Semaglutide hit statistical significance at all doses tested: a 42% placebo-adjusted difference in the high group provides something of a bar to beat.

Novo's study tested once-daily injections of sema at three different doses; the drug is sold in diabetes as a once-weekly injection, branded Ozempic, and formulated for once-daily oral dosing and sold under the trade name Rybelsus. 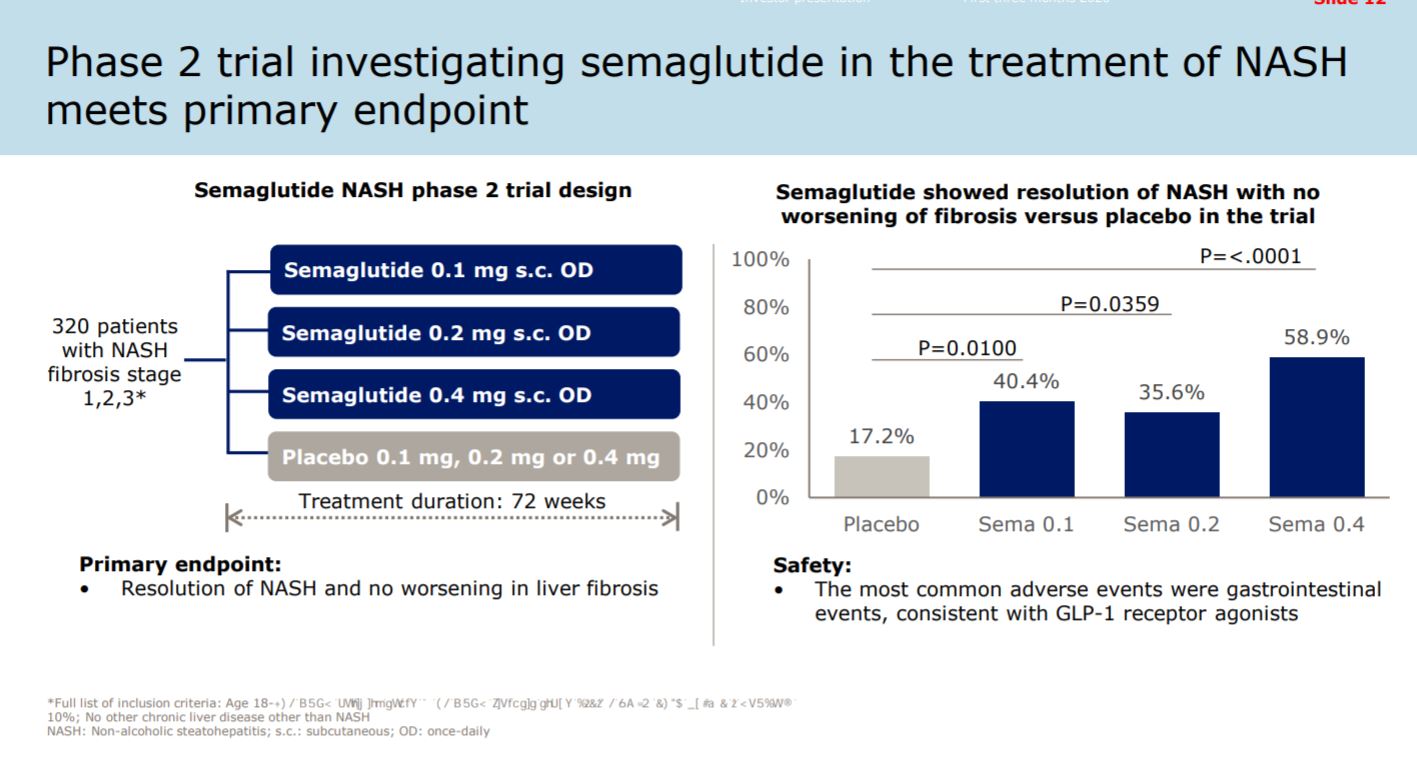 Missing the key secondary endpoint – at least one stage of liver fibrosis improvement with no worsening of Nash – is disappointing, but then this was always a long shot given sema’s mechanism. The drug works mainly through metabolic and endocrine pathways, and in diabetes has been proven to promote weight loss.

This was also seen in the Nash trial, it was revealed on an analyst call this afternoon. Mads Krogsgaard Thomsen, Novo’s chief scientific officer, said “trends were positive” on the fibrosis improvement secondary endpoint, despite missing statistical significance.

Fibrosis progression endpoints did show a statistically significant and dose-dependent reduction, he added, suggesting that sema’s impact on liver scarring could be seen in longer trials.

These data “point towards a disease mechanism that has the potential to arrest progression of the disease, including fibrosis”, he said. Novo envisions gaining approval based on the Nash resolution with no worsening in fibrosis endpoint, and then continuing the study to collect a longer-term picture of the drug’s utility.

“There are good reason to believe that achievements in hard outcomes over time should be doable,” Mr Thomsen said.

Novo also seems confident that gastrointestinal tolerability issues, a known side effect of the GLP-1 agonist class, will not hold back development. Only 5% of patients in the study discontinued because of adverse events, and only two out of 90 in the high-dose group specifically for GI issues.

Novo declined to discuss when pivotal studies might start, and with new trial starts paused because of Covid-19 this is understandable. A once-weekly dose is likely to be used, Mr Thomsen said, stressing that he was not awaiting impending results from a study testing sema in combination with two Gilead Nash projects before deciding whether to push on.

“Semaglutide looks to become a standalone and maybe an anchor drug in the future for Nash,” he said.

Such sentiments have been heard from several small Nash players in the past few years, of course, and most have come to nothing. But the diabetes giant is not known for its hyperbole, and has already set out lofty ambitions in the related obesity space.

Novo might not be the most advanced Nash player right now, but its deep experience in metabolic disease, and equally deep pockets, make it very well placed to succeed. Its next step will be keenly awaited.