Relugolix gets a Hero’s welcome in prostate cancer

The Hero study gives Myovant an opportunity to change the way hormone-sensitive prostate cancer is treated.

Myovant looks like it might be able to add a second string to the bow of its lead asset, relugolix. An apparent success in a hormone-sensitive prostate cancer trial will lead to a US filing, perhaps helping Sumitomo Dainippon Pharma justify its recent purchase of a 46% stake in Myovant.

How much the prostate cancer setting amounts to is a key question, however. A thorough analysis of the Hero study that read out today is needed to determine whether relugolix’s efficacy is not merely in line with that of leuprolide, an established androgen deprivation therapy for this stage of prostate cancer.

Until now relugolix’s potential lay mainly in uterine fibroids, where its phase III win was greeted with concern over the prospects of an expensive launch (Myovant punished for success, May 14, 2019). Today Myovant surged 130% on hopes that the company could change the standard of care for androgen deprivation in prostate cancer.

Hero had tested relugolix, a GnRH antagonist, head to head against leuprolide, an LHRH agonist. Both aim ultimately to reduce testosterone production and slow prostate cancer before it becomes castration resistant, but as ever the devil is in the detail.

On the face of it relugolix has simply demonstrated non-inferiority to leuprolide on Hero’s primary efficacy measure, testosterone suppression to castration levels at 48 weeks. This showed a 96.7% response rate for relugolix versus 88.8% for leuprolide, which according to the trial’s design met a non-inferiority threshold.

Demonstrating non-inferiority is necessary for EU approval, and Myovant stressed that relugolix's efficacy was “well above” the set threshold. For US approval the lower bound of the 95% confidence interval for the response rate must be at least 90%, and this too was met in the Hero study.

Myovant also said relugolix showed superiority to leuprolide on five secondary endpoints, with a high degree of statistical significance. A key additional data point, castration resistance-free survival, is expected to emerge from Hero in the third quarter of next year. 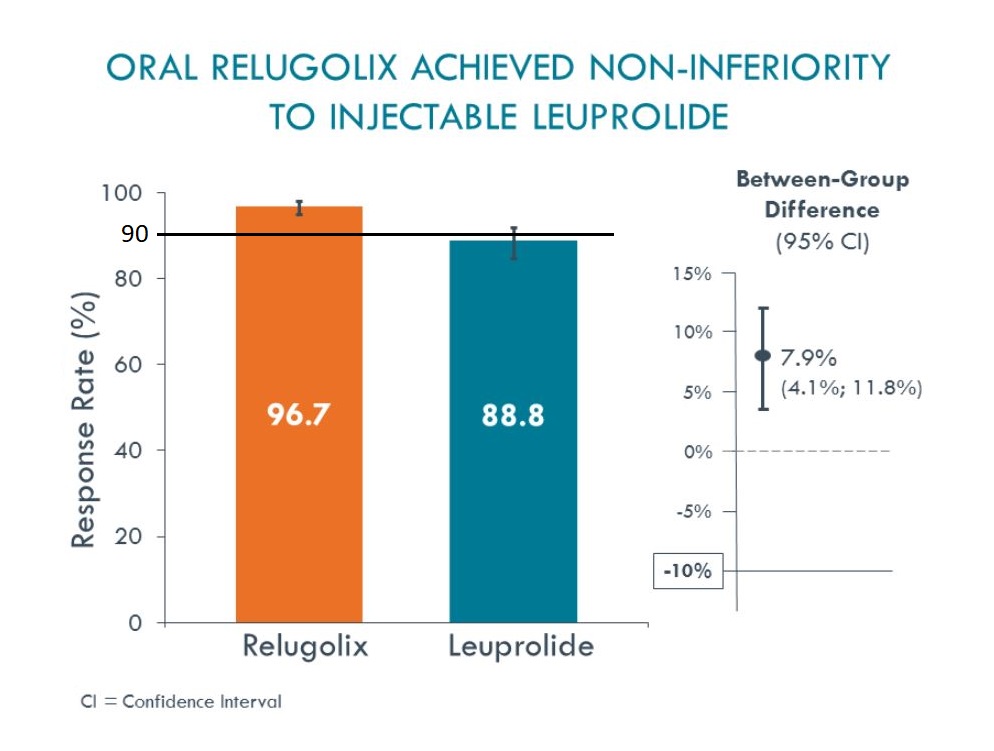 However significant and relevant these measures are, it might be that relugolix’s real benefit lies in safety and convenience over leuprolide, and Myovant will have to make the case for this with doctors and payers.

Specifically, by the nature of its mechanism of action, leuprolide causes an initial increase in testosterone, and this can worsen disease symptoms. No such clinical flare was seen with relugolix, Myovant said, and mean testosterone levels returned to normal within 90 days of treatment discontinuation in Hero.

Moreover, relugolix is given orally, while LHRH agonists are injected hormones. Not only does this allow Myovant to make the case for a more convenient therapy, it could fit with the growing relevance of oral drugs like Xtandi and Zytiga, over injected chemotherapy, in early treatment of prostate cancer.

With relugolix set to be filed next year the focus will switch to Myovant’s ability to convince doctors to turn away from an established therapy. Whether the Hero data enable relugolix to be priced at a significant premium to leuprolide is another consideration, as is whether Abbvie’s marketed GnRH antagonist, Orilissa, should now also be tested in prostate cancer.

Myovant socks it to Orilissa

Obseva shows why red flags are worth heeding

Roche and Celgene set for battle in acute myelogenous leukaemia